About 20 minutes after Maritza King Gutierrez’s work break, the gunfire started. She recalls people falling around her, some throwing themselves on the floor, others running. Parents with children fled into the bathrooms Gutierrez was in charge of cleaning with their children. Men held the doors outside, shielding their wives and children inside, she said. Gutierrez warned those hiding in the bathrooms that they weren’t safe and lead people to a large metal container where the company she worked for kept their equipment. She ushered her co-workers and strangers from the concert into the container for safety.

“We wanted to get more people in so we had to take boxes out of toilet paper, towels, soap, everything we had in there so we could fit more people. There came a moment when there was no more space,” Gutierrez said in Spanish, voice cracking. “I stayed the whole time holding the door. The door of the container didn’t close from the inside, only the outside. I stayed outside holding the door closed with my hands through the night. There were people who wanted to get inside, but there was no more room. Even if I wanted to, they couldn’t.”

Gutierrez’s eyes water. She says her skin still prickles when she thinks about that day.

She is one of many immigrants seeking a U-Visa so she can become a United States citizen.

Tuesday a group of immigrants working at the Route 91 Country Music Festival met privately with Sheriff Joseph Lombardo to share their stories in an effort to expedite their applications for U-Visas.

For eight months applications for U-Visas that were submitted by immigrant victims of the Route 91 shooting have been stalled by the police department.

Part of the U-Visa application process requires a certification from the police department approving that applicants have helped law enforcement investigate or prosecute a crime.

Gutierrez pulls out the map of the festival grounds she was given the day of the concert and a copy of her police report. She carries them with her, and says they’ll help prove her case.

The U.S Citizenship and Immigration Services approves a maximum of 10,000 petitions for U-Visas a year.

During a press conference, North Las Vegas Councilman Isaac Barron, who attended the meeting between the immigrant victims and Sheriff Lombardo, said the sheriff was unaware that the person who was in charge of reviewing the applications had been “out of service” for several months.

“When he realized, and that was before we came, he put not one but four officers in charge of application reviews,” Barron said to media.

“They are going to judge one by one,” said Janette Mata, the communications director for Make the Road Nevada, the organization helping immigrant victims apply for the visas. “It depends on what everyone’s experience was. If they had any injuries, if they were a source for the police during the investigation. They then have the privilege of staying in the United States, since if they left they wouldn’t be able to help the police anymore.”

All of the victims at the conference have been harmed by the shooting, either physically or mentally, but not all of them are guaranteed a U-Visa.

Juanita Moralez is a migrant worker. In the spring she travels from Las Vegas to Fresno, California where she works in the fields picking grapes and cherries. A month ago, she started working in a factory that assembles slot machines, and couldn’t work more than a week.

“The sound of the compressor in the factory sounded like the bullets, pow, pow, pow,” Moralez said.

She was given seven counseling sessions with BBS Counseling, a group that has done pro-bono work for immigrant victims with PTSD who required therapy in Spanish. She said she is grateful for their help when no one else was there for her.

“That’s why we say we’re the forgotten ones,” Moralez said.

Mata said the meeting with Sheriff Lombardo was an effort to incentivize the police department to look at the U-Visa applications. After hearing victims stories she hopes they can take a step forward in the U-Visa process, which can take up to three years.

“This is a real problem, after all they went through, these people need something good to come out of it,” Mata said. 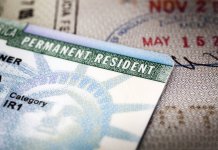 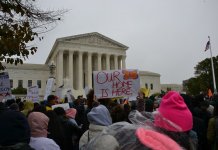