Georgiann Davis was 13 years old when a doctor discovered instead of having ovaries and a uterus that she had internal testes. Yet, Davis didn’t find out until she was in her mid-20s.

“I was lied to, and my family was lied to,” she says. “I didn’t find out until later when I requested my medical records.”

Now Davis, a sociology professor at UNLV, has been working to educate people about what it means to be born intersex and how various policies impact gender-nonconforming individuals.

She is joining the fight along with other gender-diverse people who are trying to end the practice of conducting surgeries on newborns with intersex characteristics.

“We aren’t against surgery or medically necessary interventions,” Davis says. “We believe it shouldn’t be done without a person’s consent.”

Gender Justice Nevada, a local organization that supports gender-diverse individuals, hosted a panel in June featuring intersex individuals telling their stories and talking about how these policies have impacted their lives.

Each person had a different experience of finding out they were intersex. John Benedict, who is now 60, found out when he was 48 after a surgery revealed he had a uterus. His parents weren’t informed that he was intersex.

According to the Intersex Society of North America, intersex is used in general terms when a person is born with a reproductive or sexual anatomy that doesn’t seem to fit the “typical definitions of female or male.” It can also manifest on the genetic side when people are born with some cells that have XX chromosomes and other cells that have XY chromosomes.

Statistics vary drastically on how many people are born with intersex traits.

Some studies suggest it could be anywhere from 1-in-150 while others estimate it could be 1-in-2000, Davis says. Another estimate says about 2 percent of the population have intersex traits.

The uncertainty is also partly because people either don’t know or find out much later in life. It also has to do with fear to be upfront about it.

That was true for another panelist, Kristine Hunter, who had never knowingly met another person born intersex until this month’s panel.

The conversation around being intersex began to develop when Tiger Devore, a clinical psychologist, discussed it on The Oprah Winfrey Show in 1984.

“And I’ve been fighting for the (intersex) community to organize since then,” Devore says.

For more than two decades, he has talked about the lifelong impact these surgeries have.

Even with advancements in medical procedures, many argue these are unnecessary and are mostly done out of culture norms surrounding gender.

“Doctors are shaping our bodies based on what they predict our gender will be,” Davis adds. “They are conducting these surgeries based on parent’s anxiety.”

In 2011, the Nevada Legislature added gender identity and expression to the list of those protected from discrimination when accessing public accommodations, housing and employment. Only 20 states have done so similarly.

Nevada became one of a few states in 2015 to end health insurance discrimination among gender-diverse people, Heenan adds.

In 2017, the Legislature also ended conversion therapy for minors and voted to offer better protections for LGBT youth in foster care.

With the passage of Senate Bill 225 that same year, all Nevada school districts are required to implement policies and training support for sex and gender-diverse students. While focus has been on transgender students, Heenan says this also benefits intersex children.

The Clark County School District is still wrestling with its specific policy.

More recently, activists worked to update the DMV’s process for changing gender on a driver’s license – the change had previously required a medical clearance. It is discussing authorizing a third gender marker for licenses.

Gender Justice Nevada along with members of the intersex community came out in support of Senate Bill 408, which would have set up guidelines, and disciplinary actions, for performing medical procedures on children.

It was opposed by the Nevada State Medical Association, the Society of Pediatric Urology and various others in the medical profession. They argued that medical procedures have advanced in the last few years, and that the bill was too broad and would prevent doctors from performing other surgeries to correct abnormalities such as hypospadias.

“I am very opposed to this bill because I think it does not really take into account the fact that 1-in-150 boys is born with a form of hypospadias, which can be corrected and can be corrected well,” Clare Close, a local urologist, said during testimony.

The bill failed, but Heenan plans to bring it back in the next session.

Recently, California legislators introduced a bill that would ask health professionals to delay any surgery deemed medically unnecessary until an intersex person can consent.

Alesdair Ittelson, a member of the national intersex youth advocacy group interACT, says it makes sense for more states to get rid of the practice since the United Nations, the World Health Organization and Human Rights Watch have weighed in on the topic. “Something that is called torture by the UN is performed everywhere in the United States,” Ittelson adds.

Gender Justice Nevada is hoping to have more meetings on the subject. The group has started having more conversations with current and potential lawmakers and even has sent volunteers out to begin engaging people.

“We should ask for the legislation we deserve,” Heenan says. 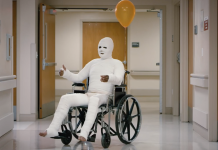 Why more places are abandoning Columbus Day in favor of Indigenous...