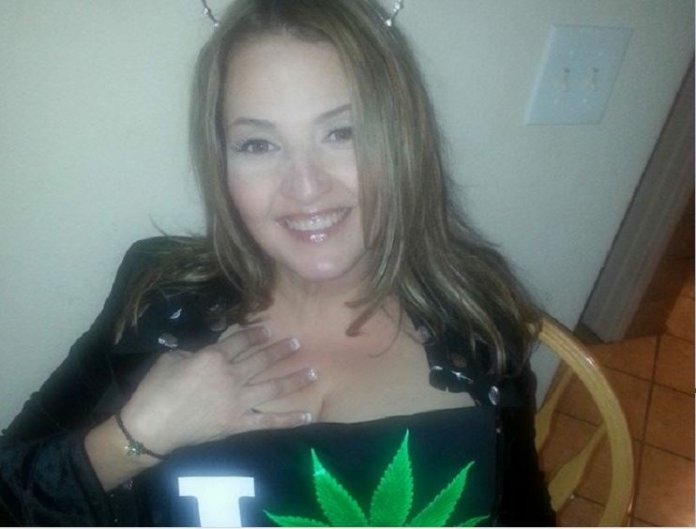 “My children were stolen and that’s not sour grapes.  It’s the absolute truth. I didn’t really believe that this kind of thing happened either until it happened to me,” she says. “I was raised a Christian in a law enforcement home. I was a stay-at-home mom who home-schooled her children.  If this could happen to me it could happen to anyone.”

A fight between two of Ballard’s older sons brought Las Vegas Metropolitan Police to her home in January of 2011.  Marijuana plants filled the home, including a bedroom police said belonged to Ballard’s youngest children, then 8 and 9 years-old.

Ballard, who says she had a valid medical marijuana card along with a doctor’s okay to grow more than the standard amount of plants allowed by law, says the plants were kept in a locked grow room and were out for watering purposes.

“My children could have rolled in those plants and no harm would have been done to them,” she says. “Immature cannabis is hemp.  At that point there was no THC  (tetrahydrocannabinol) content.”

Ballard was arrested and charged with possession of marijuana with intent to sell, possession of a controlled substance, child abuse and neglect as well as child endangerment.

“These folks were more interested in making money than the safety of the children,” Lt. Laz Chavez of Metro’s narcotics unit told the Las Vegas Sun at the time.

Ballard’s youngest children were taken to Child Haven and later sent to her in-laws in Missouri. A judge terminated Ballard’s parental rights.  Her in-laws adopted the two children.

There were 726 children in Nevada whose ties were legally severed from their parents in 2013, the year Ballard lost her children.  According to state records, 85 percent of terminations that year freed children under 18 months old for adoption.  Less than two percent of children subjected to parental termination were above the age of five.

The child abuse and endangerment charges against Ballard were dismissed, according to District Court records. Legal wrangling ensued. She appealed her convictions for possession and asked the State Supreme Court to restore her parental rights but the court denied her petition, arguing the dismissal of the criminal charges related to her children was irrelevant to her parental termination.

“The termination order was not based on appellant’s criminal proceedings, however, and was based on other grounds, including appellant’s failure to comply with her case plan, stop using drugs, and remedy the situation that led to the children’s removal,” wrote a three-member panel consisting of Justices Nancy Saitta, Kris Pickering and Mark Gibbons.

In other words, Ballard lost her children because of her status as a medical marijuana patient, and her refusal to allow anyone but her doctor to dictate her care.

“Is it legal for judges and prosecutors to prescribe medical advice?  I refused to listen to them. That’s why they took away my kids,” she says.

“What do I think when I see people smoking weed, supposedly without fear of losing their kids? It breaks my heart as I once trusted the law, too.” Ballard says of Nevada’s medical pot and decriminalization statutes, which she considers a Catch-22. “It’s not like it wasn’t legal when my kids were taken. It was.”

Ballard says she saw her children last year, for the first and only time since they were removed from her home.  They are now close to adulthood.

“With all the media attention to border children being wrongfully separated from their mothers, I can’t help but wonder how is this any different?” Ballard asks.  “Here in the U.S., parents unjustly lose their children due to cannabis laws all the time, and it’s time we stop this horrible, barbaric practice.”

Marijuana is legal in nine states and medical marijuana use is legal in 29 states.  But decriminalization is far from a free pass for pot-smoking parents, says Las Vegas attorney Marshal Willick, who wrote on his website:

“Judicial reactions to evidence of a parent smoking marijuana over the past 20 years has been as varied as ‘no big deal’ to the posting of signs in the courtroom demanding that parents choose between drugs and their children in an either/or selection and near-automatic loss of custody to the using parent.”

“Imposing personal views in place of the law smacks of ‘arbitrary and capricious’ and is grounds for reversal upon appeal,” Willick told the Current. “Parental misconduct cannot be used to change custody.  It has to be based on the best interest of the of family.”

While the legal standard in custody cases is the “best interest of the child,” several attorneys said in interviews that some judges are known for relying on their personal beliefs in cases involving marijuana use.

But Clark County District Court spokeswoman Mary Ann Price says judges make child custody decisions “in accordance with the applicable laws and facts of the case. There are no specific statutes that address marijuana use with respect to custody. … Decisions are made in the best interests of the child (NRS 125C.0035) based on the facts of the case.”

Further complicating the issue is a reported increase in the number of pregnant women who consume marijuana, primarily to cope with debilitating nausea that can accompany pregnancy.

Forbes reports a study by Kaiser Permanente looked at 279,457 pregnant women from 2009 to 2016. Marijuana use among pregnant women reportedly increased from 4.2% to 7.1% during that time.  Rates were significantly higher for women under the age of 25.

Nevada health officials are urging providers to get their patients to open up about their marijuana use during pregnancy, but advocates fear that could prompt unwanted attention from authorities. While testing of newborns for marijuana is not routine in Nevada, attorneys warn it may be prompted by a mother’s admission of use.  Positive tests must be reported to Child Protective Services.

How are courts in other states with legal marijuana approaching family court issues?

Colorado law requires a “finding of endangerment to the child’s physical health” to restrict parental access.  The Colorado Court of Appeals ruled in 2010 that a parent’s use of medical marijuana does not constitute endangerment.

In Washington state, a seven-year-old boy was removed from his home because authorities said his parents were high “all the time” and unable to care for their son.  The boy was later returned.

Willick says most states are moving away from focusing on parental use or “moral harm” and instead examining the effect of the use on the children.  Given the rapid evolution of the drug as a legal substance, he says “judicial disapproval” has no legitimate place in the analysis.