Built in 1971, the Landsman Gardens was the first family public housing complex offered in Clark County.

After years of being underfunded, Landsman Gardens fell into disrepair. Reports of asbestos, lead-based paint, and water damage plagued the property.

Last year, public housing in Clark County fell from 2,755 units to 2,651, though not because of disrepair. The drop in units is the direct result of the Rental Assistance Demonstration program or RAD— a program that allows private companies to manage and rehabilitate public housing in exchange for tax credits and subsidies.

Today, decrepit public housing in Clark County like Landsman Gardens has been gutted, and the residents now have new kitchens, new appliances, and new floors. The units were remodeled at about $235,000 each.

The 100-unit complex is emblematic of a new model for managing public housing— privatizing to preserve.

The idea is that private managers and companies are better equipped to operate housing. Private operators would have access to private capital for rehabilitating the properties. That is, public housing would no longer have to rely so heavily on federal funding to provide basic maintenance.

The U.S Department of Housing and Urban Development began pushing the RAD program onto local housing authorities through web seminars in 2011. At first, Amparo Gamazo, the interim executive director of the Southern Nevada Regional Housing Authority (SNRHA), was skeptical of the program. But the housing authority had few options and applied for the program within the first year it was announced. With Landsman Gardens facing multiple issues, housing authority officials were afraid the units would become uninhabitable if repairs were delayed any longer.

“HUD cannot do it alone anymore. Our properties are old and tired,” Amparo said. “We extend the life of the property for another 30 years.”

“We are the guinea pigs,” Amparo said. “We are actually one of the first ones to start this program.”

Still, SNRHA has embraced RAD on a piecemeal, building-by-building basis. Eight buildings with a total of 788 units have been RAD-ified.

Once applications are approved, the SNRHA negotiates RAD agreements, which are designed to keep the units affordable for low-income tenants for up to 15 years with an extended affordability period of 35 years for a total of 50 years. After those 50 years are up, the affordability status of the units is uncertain.

The RAD program allows the transfer of public housing property to for-profit companies to facilitate private investment through tax credits as long as the local public housing authority “preserves its interest in the property.”

In Clark County, the SNRHA ensured that non-profits, rather than for-profit real estate companies, took a lead role in the project. Amparo said nonprofits could be better trusted to look out for residents’ best interests.

“The investors we hear from the private sector, they are here to make money. They are not going to keep those units affordable,” Amparo said. “They want a unit they want to buy cheap, they want to rent high, and they want to sell high .”

“RAD had a lot of restrictions removed,” Amparo said. “By removing those attachments we can go after tax credits through the state of Nevada housing division and then we can seek other kinds of funding.”

For example, some RAD housing projects like Vera Johnson B are now eligible for the HOME Investment Partnerships Program, which are grants set aside for non-profits that want to develop and build.

Despite their operations now being administered privately, both HUD and the SNRHA maintain oversight of the program. The SNRHA not only continues to own the RAD properties, but also determines who gets access to public housing through a wait list.

Disrepair of decades-old buildings is accelerating faster than the government can fix them. The estimated maintenance backlog is now more than $26 billion. The annual budget for public housing repairs, meanwhile is less than $2 billion, according to HUD.

The urgency to solve this funding problem has only grown as the Trump administration pushes for billions of dollars of cuts to public housing programs.

The Obama administration first launched RAD seven years ago, and while the program has enjoyed bipartisan support, turning over public housing to private entities has not come without controversy, with some housing experts fearful that residents will be displaced once they’re left at the mercy of landlords.

On March 22, the Government Accountability Office issued a 72-page report revealing that HUD does not systematically use its data systems to track effects of RAD
conversions on resident households, like changes in rent and income, or monitor resident safeguards—such as the right to return to a converted property.

Karen Danielsen-Lang, a professor at UNLV’s School of Public Policy and Leadership, said many experts worry that once the government loses complete control over public housing units they might eventually lose affordable housing for the most vulnerable low-income people.

“The government is basically getting out of the public housing business in terms of government ownership of buildings,” wrote Danielsen-Lang in an email. “My opinion is that it might not be good in the long run since the government won’t have access to these units like they did in the past. In the short term, it obviously allows for much needed renovation of older apartment structures.” 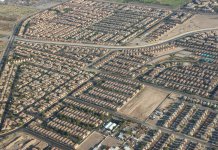