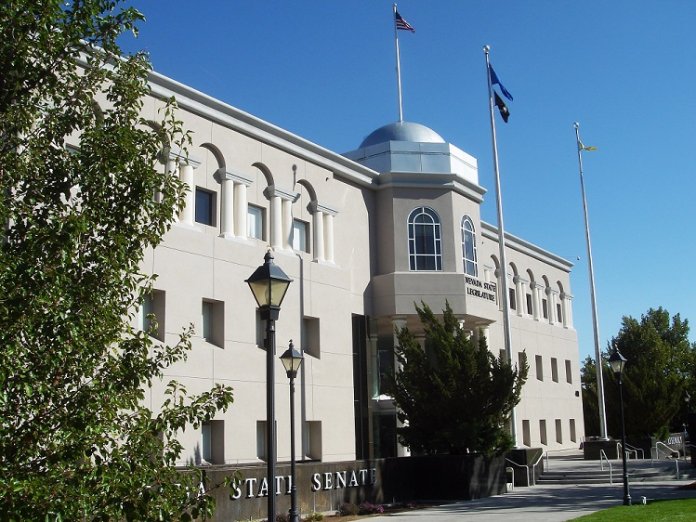 They are more detailed, compassionate and experienced at working as a committee.  They’re also more prone to interruptions from family, burdened by personal responsibilities and at risk of economic peril for becoming public servants.

Such are the benefits and the pitfalls of the female lawmaker, according to those who know the job best – the women of the Nevada Legislature.

A recent New York Times analysis determined Nevada could be the first state to have a female majority in the Legislature.  Currently, 38 percent of Nevada legislators are women.  After the November election that number could swell to 65 percent.  While observers say that’s unlikely, a majority is within reach.

With women’s reproductive rights increasingly under attack and the prospect of another Trump appointee cementing the Supreme Court further to the right on abortion — as well as gay marriage, voting rights and a host of other issues — states, and female state lawmakers in particular, could take on added significance in defending battles long ago fought and won.

Barbara Buckley, the first woman to serve as Nevada Speaker of the Assembly, says men and women respond differently from the onset of their legislative careers.

“Almost every woman I recruited asked me ‘do you think I am qualified’ and almost every man asked ‘how much does it pay.’  That’s societal influence that is still pervasive — it’s changing, but not gone.”

Would a female majority displace the “Good Ole Boy Network” and replace it with “Good Ole Girls” or would the ladies foster a more inclusive process?

“There is an old adage of the Good Ole Boys club but I have to say, I think the Nevada Legislature has been more open to, at least, women being in the game,” says Assemblywoman Shannon Bilbray-Axelrod, a Democrat.

“Women have already gotten in there.  Dina Titus and Ann O’Connell.  They put themselves in the room.  Chris Giunchigiani. She took a seat at the table.  That had an influence on more women being able to run,” Carlton says.  “Barbara Buckley.  She sat right next to Richard Perkins and made sure he had all the facts he needed.  It’s about having the skills set, knowing what your job is. But we do look at things differently and come at issues from a different perspective.”

Preparation and confidence are the keys to getting that coveted seat at the table, says Clark County Commissioner Marilyn Kirkpatrick, who was the second female speaker behind Buckley.

“It’s a given that the men are at the table and the women have to work harder. You have to do your homework and come to the table prepared.  You have to be twice as good,” Kirkpatrick says.  “Women make good lawmakers because they are generally team players.  They’ve done the PTA and soccer mom thing.  Ninety percent of the decisions on the Las Vegas Strip are made by women.  And they don’t need credit like the men do.  Men would prefer to work alone and get all the credit.”

“Yes, we are team players because of those things,” says Senator Joyce Woodhouse, who is facing the final years of her term-limited office. “But it’s more than that. It’s in our DNA.”

But Kirkpatrick says not all women are team players.

“A lot of the time women step on each other to get to the top rather than standing side by side,” she says.  “That hurts the cause in the long run.”

Women already hold prominent leadership positions in both parties and in both houses.

In the Senate, Majority Leader Aaron Ford is running for Attorney General and is mid-term, as is Clark County Commission candidate and State Senator Tick Segerblom. State Senators Pat Spearman and Woodhouse are the co-majority whips for the Democrats.  Do they have a chance of moving into top spots?

“There certainly could be a woman as assistant majority leader,” says Woodhouse, adding she prefers to stay on as chair of Finance.  “But I will serve wherever my leader wants me to serve. All of it’s going to boil down to the election.”

“The Senate Democratic Caucus is poised to be a majority female body. I’m tremendously excited about that,” says Senator Yvanna Cancela, who was appointed to fill the seat vacated by Congressman Ruben Kihuen and is seeking election to the seat.  “I became the chair of a committee in my first session. I think that’s indicative of the potential women have to lead within the Caucus, and more broadly in the Legislature.”

Assembly Speaker Jason Frierson, a Democrat, is praised by his caucus for entrusting powerful chair positions to women on five of eleven committees, including Bustamante Adams on Commerce and Labor and Maggie Carlton on Ways and Means.

“I don’t think much will change,” says Assemblywoman Dina Neal. “We already had five women chairing committees last session on the Assembly side.  I think the vice chairs as women will increase.”

Minority Whip Melissa Woodbury is the only woman currently in the Republican Assembly Leadership.

Republican Assemblywoman Lisa Krasner says she’s found the Republican Caucus to be “very supportive of their women members and I see no barriers for women to obtain leadership positions. We are confident that in the 2018 General Election, the Republican Assembly Caucus will have six or more female members. That would be a 50 percent increase in the female membership within our caucus going from four women to six women members.”

Former Speaker Buckley says mentoring is key to women rising to leadership slots, not just in the Legislature but throughout the state.

“I think we have had some successes in Nevada, especially with Democratic women. I was the first woman speaker and helped give opportunities to Debbie Smith who went on to chair Senate Finance and was majority whip. …Marilyn Kirkpatrick went on to become speaker and county commissioner.  Dina (Titus), of course, was Senate Minority Leader.  We have women mayors – (Las Vegas Mayor Carolyn) Goodman, (Henderson Mayor Debra) March and (Reno Mayor Hillary) Schieve.”

Ironically, despite their role in charting the state’s course, women lawmakers are subject to the mundane responsibilities encountered by many working women.

“Today you have younger women running and it’s really hard to do that balance with being a wife and mother,” says Kirkpatrick. “Heidi Gansert was a great example. She’d go home and clean and cook. Teresa Benitez Thompson is doing it.  It’s like having three jobs.”

“I used to do it for my family,” Kirkpatrick says. “Cook all the meals on the weekend.  Do the laundry. That’s a normal thing for many of the women in the Legislature. My husband picked up the slack.  It was the best thing that happened to our family.  He was no longer just bringing home the bacon,” says Kirkpatrick, the mother of five daughters.

“We may have had pink clothes at times when my husband had to do the laundry, but it was the best thing that could have happened for him to be here dealing with two teenage girls,” she says.

Lawmakers are paid a pittance for the privilege of upending their lives for four months every two years.  The economic hardship can be enough to dissuade some women from seeking office.

“It’s a problem across the board, but especially for single mothers.  Some families manage to do it.  Some even have to pay their own insurance during the session, depending on their employer,” says Assemblywoman Ellen Spiegel, who is wrapping up her fourth term.

“The financial part is a huge strain on a marriage and a family.  You don’t want to tell your kids they can’t go to Disneyland or something because you chose to serve,” says Carlton. “So you go into debt and learn to save for next time.”

“You cannot beat the odds of rising to the top if you are not in the body.  If a state only has 15 percent of its body represented by women, leadership will likely look like it is still the 1950s.”

Nevada lawmakers and impeachment – from Johnson to Trump