Whether from Las Vegas, Chicago or Parkland, Fla., young people in the March for Our Lives movement want to end gun violence, enact common sense legislation and defeat politicians who stand in the way.

At the July 16 Road To Change town hall at Sierra Vista High School, students made sure to identify Attorney General and Republican candidate for governor Adam Laxalt as Exhibit A in Nevada, particularly for his refusal to enforce Nevada’s voter-approved ballot initiative to expand background checks.

“Your laws in your state are only as good as your attorney general’s willingness to implement them,” said David Hogg, one of the students who rose to national prominence after the Parkland shooting in February. “Adam Laxalt does not enforce these laws.”

Though the high school gymnasium was filled with a diverse representation ranging from Moms Demand Action in their red shirts to various political supporters clad in campaign swag, the crowd was overwhelmingly young.

March for Our Lives began this year as a youth-led coalition after 17 students were killed at Stoneman Douglas High School in Florida. Now students from the across the United States are vowing to hold elected officials accountable for gun policy choices.

“This is the first of many events leading up to November,” says Denis Hooks with March for Our Lives Las Vegas.

Monday’s 90-minute, three-part panel gave an overview of Nevada laws and policies, heard from survivors from the Las Vegas and Parkland mass shootings about the impact of gun violence, and discussed practical steps.

The group is planning to host a series of voter-registration drives and plans to host town hall meetings featuring various candidates who support policies that address gun violence. Prior to the Monday’s meeting, students gathered at Sunset Park before canvassing voters.

“If you don’t listen to youth, we will vote you out,” says Karl Catarata, an organizer with March for Our Lives Las Vegas. “People our age can make a difference.”

The movement’s policy goals include implementing universal background checks, digitizing records within the Bureau of Alcohol, Tobacco, Firearms and Explosives, funding the Centers for Disease Control and Prevention to research gun violence in America, and banning high-capacity magazines and semi-automatic assault rifles.

Catarata says having the Parkland students come to Southern Nevada helps fold the local movement into the national conversation around gun violence.

But Nevada has its own history of gun violence and has to find its own voice in the movement.

“We can begin to look at the specific needs here and what we can do in Nevada,” he says.

That’s not hard to imagine. It’s been less than a year since the Route 91 mass shooting resulted in 58 deaths.

But advocates know Nevada lands on the wrong side of many statistics when it comes to gun violence.

Nevada had 498 firearms deaths in 2016 according to the Centers for Disease Control and Prevention. According to the Law Center to Prevent Gun Violence, the state is 15th highest in gun deaths per capita.

Nevada is No. 2 in female homicide victims according to the Violence Policy Center, with intimate partner violence being the leading reason.

The Law Center to Prevent Gun Violence reduced Nevada’s C- rating to a D in 2017 after the background check ballot initiative wasn’t implemented. Laxalt says the law is unenforceable, pointing to the FBI’s lack of cooperation. Laxalt and Gov. Brian Sandoval are currently being sued for failure to implement the law.

The center notes Nevada has made some strides.

For one, the state has made better efforts when it comes to laws that protect domestic violence victims. Last year, the Nevada Legislature passed Senate Bill 124, which requires people convicted of domestic violence and some stalking cases to surrender, sell or transfer their firearms.

According to the Nevada Department of Public Safety, 361 people with domestic violence convictions and 56 people with protection orders were prevented from getting a gun from a licensed firearms dealer in 2017. The department doesn’t track stalking convictions.

This also doesn’t include people who were able to buy firearms through unlicensed methods such as gun shows or buying from individuals.

Organizers think Nevada needs better policies, and the best way for that to happen is to elect officials who support measure to reduce gun violence.

“We need to have an attorney general who will enforce (background checks),” Catarata says. “We need to make sure all our elected officials live up to their word.”

Currently, there is no Nevada law to prevent the use of military-style weapons, large-capacity ammunition magazines, silencers or bump stocks.

Democratic state Sen. Yvanna Cancela says she is filing a bill draft request that would ban bump stocks. She is also considering expanding it to include a ban on assault rifles.

“I think that depends on what happens in the election,” she says. “Though I think it’s important to put forward the best legislation regardless of who is governor. It forces us to have important conversations.”

Elizabeth Becker, the communication director for Moms Demand Action Nevada, says Nevada should develop red flag laws, which is also another suggestion of the Law Center to Prevent Gun Violence.

Passed in three other states, red flag laws give families the ability to obtain orders to temporarily remove guns from people at risk of harming themselves or others.

Gov. Sandoval created a School Safety Task Force to look at what could be done locally. The group discussed items like developing better infrastructure and creating policies to identify violent behavior.

It recently approved 14 recommendations, and more bills are expected to develop from those recommendations for the Legislature to consider when it convenes early next year.

March for Our Lives Movement is hoping to be the driving force behind some of these efforts.

‘We have something in common’

“Every day, there are shootings,” Hogg said Monday. “This is an issue that affects everyone.”

During the event, panelists took note the prevalence of gun violence and its ability to impact anyone, including those often overlooked when it comes to gun violence: disenfranchised communities.

“It is necessary for the March for Our Lives Movement to take head-on how gun violence manifests in a variety of communities,” said Micajah Daniels, a spokeswoman for the local chapter. “The Road to Change cannot be paved on the dismissal of communities that have been historically underrepresented.”

This means making sure people of color, LGBT communities, women and undocumented immigrants are folded into the conversation.

Daniels talked about how people of color are more likely to be victims of gun violence.

“The transgender community is chronically under threat of gun violence,” Daniels said. “Sixty-five percent of transgender homicides in 2017 were with guns, and the majority of these homicides were directed toward transgender women of color.”

Daniels said one thing that often gets bypassed is how officer-involved shootings impacts people of color.

Since gun violence touches so many lives and impacts diverse people for various reasons, Catarata said there is a way to find commonality no matter the party affiliation. 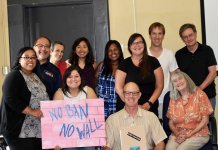