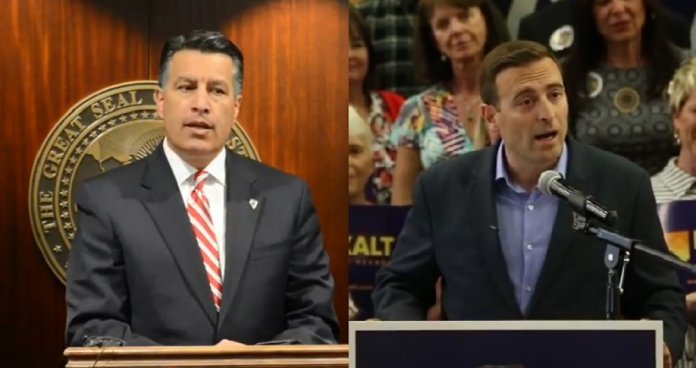 Last week, Republican Gov. Brian Sandoval announced that no, in point of fact he would not, could not, bring himself to hold his nose and endorse Adam Laxalt, his party’s nominee to succeed him.

Now seems as good a time as any to remember that about this time of year in 2011, Sandoval endorsed Texas Gov. Rick Perry for the 2012 Republican presidential nomination.

In other words, a governor who publicly and in broad daylight said he thought Rick Perry was qualified to be President of the United States refuses to extend even the slightest sign of having any confidence at all in his state’s attorney general.

The ostensible explanation for Sandoval’s snub of Laxalt stems from the latter’s stated desire to erase the former’s tax on business that Sandoval shepherded through the Legislature in 2015.  There have been other publicized rifts and tiffs between the current governor and the current attorney general, and still more tensions, presumably, that haven’t surfaced.

So Sandoval’s snub may have nothing to do with a gubernatorial presumption that Adam Laxalt is somehow even less fit to govern than, say, a former Texas governor who to this day is best known for going on live national television, first, to forget what government departments he wanted to eliminate, and second, to compete on Dancing with the Stars. Gravitas does not seem to be a Sandovalian criteria for endorsement. Sandoval’s snub is, if not all, at least in large part about Laxalt’s knee-jerk ideological reflex to reverse Sandoval’s policy of taxing business to fund education.

But that doesn’t mean there aren’t a lot of other factors that could render Adam Laxalt unfit for an endorsement from his own party’s governor, who also happens to be the most popular elected official in the state.

Prior to being elected attorney general, Laxalt was known primarily for two things: being a professional “train wreck,” and having the same last name as someone who was rather well liked by Ronald Reagan.

The latter factor trumped the former in 2014, the shiny Laxalt name providing young master Adam a running start to his life-long ambition to be a career politician.

But then, it was 2014, an election cycle in which Nevada Democrats deployed the somewhat idiosyncratic strategy of taking a pass. The party couldn’t be bothered to run an actual candidate against Sandoval, then seeking his second term. Instead, Harry Reid and the Nevada Democratic Party, long a Harry Reid subsidiary, asked the base to pretend to care about the race for a part-time position with no inbox and no real responsibilities, Nevada lieutenant governor.

Democratic organizational failure to take an entire election cycle seriously was not the only factor that led to the humiliating whupping that Nevada Democrats suffered in 2014. They were facing the usual disadvantage that befalls the party of the presidency in a midterm.

Still, Sandoval must have been awfully gratified to find that only four years after he himself took out a sitting Republican governor in a primary election, the people of Nevada were so impressed with his mad skills that his reelection was effectively unopposed.

If he had been opposed, he might not have been put in the position of having to endorse or not endorse Laxalt.

Steve Sisolak considered a run in ’14, before deciding Sandoval was too formidable. Tick Segerblom also considered challenging Sandoval, but was waved off by the Reid machine. Had either run, they almost assuredly would have lost. But if Democrats at least had a candidate at the top of the ballot, would more Democrats have voted?

Because it wouldn’t have taken a whole lot more of them to deprive Laxalt of victory. He won his campaign for attorney general by less than 4,800 votes out of more than 544,000 cast. He famously/infamously won a statewide office while losing the state’s two most populous counties.

His victory was a fluke, and he shouldn’t be running for governor.

Laxalt moved to Nevada in 2011 (Sandoval was elected in 2010; not only is Laxalt being snubbed by his own party’s sitting governor, he’s being snubbed by the only Nevada governor he’s ever had) to cash in on his name and shop for an office. He no doubt hoped to win a statewide campaign four years ago, but he no doubt also assumed a respectable loss would position him well for his next campaign, perhaps something of the congressional variety. That, after all, would allow him to return to his native Washington D.C. stomping grounds and hob-nob with the people he likes best and among whom he hopes to one day be welcomed as one of their own: celebrity beltway wingnuts. You know, KellyAnne Conway, Devin Nunes, Dana Loesch — the people Laxalt has invited to his annual lamb testicles picnic this weekend.

From guns to battery factories to football fields to a relentless insistence on the private sector’s moral superiority, there is much to dislike about Sandoval’s terms as governor. But even his harshest and most consistent critics (actually, that might be me) would admit that he has a strong strain of affection and respect for the state and its people – and not just the people who voted for him. Perhaps no single quality is more gubernatorial.

Laxalt has never given any indication that he is capable of respecting people who don’t vote for him. Oh, he may hope to hoodwink one or two. But he’s all about the base. Because he wants them to make him a star.

Sandoval is a man out of time, clearly uncomfortable with today’s tribal politics. Laxalt, by contrast, wallows in polarization. Laxalt, who counts uncompromising bat guano ideologue John Bolton among his mentors, grew up in a town full of people who vomit up right-wing extremism for a living. Now he’s soaking in it.

It is Laxalt, not Sandoval, who is a product of the age. As are, by every indication, Nevada Republicans. Unleashed at last by Trump — finally, an autocratic carnival barker they can get behind — Nevada Republicans are emboldened to share how they genuinely feel about immigrants, women, minorities, poor people, and any and all threats to a hierarchical society where people know their place and stay there. 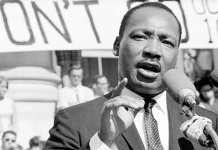