If public opinion decided policy at Clark County schools, Western High School’s Warrior mascot, replete with head dress and war paint, would be in no danger of being replaced.

Competing, unofficial surveys posted on-line give proponents  (273 so far) of the year-long effort to discard the mascot little chance of catching up with opponents, who have more than 5,000 signatures.

Now, a new online poll could be the only one that matters.  This week the Clark County School District put its name on a survey, which gives the public three options:

Western, the third high school to be built in Las Vegas (behind Las Vegas High and Rancho) opened in 1960.

To alumni, the Western Warrior is a beloved mascot, a source of pride, and a symbol of high school “glory days.”

For others, particularly Native Americans living in Southern Nevada, the mascot is a cruel caricature of proud ancestors. The headdresses and war paint worn on the sidelines and in the stands at games, and the Indian war whoops yelled by cheerleaders and fans, diminish and disrespect a culture Native Americans strive to embrace and preserve.

But the effort so far has been long and unproductive, say proponents.  Even the Las Vegas Paiute Tribal Council declined to support the effort to remove the mascot, according to a local member and expert on Native American culture.  The Council did not return a call from the Current.

“I’m an enrolled member with the Las Vegas Paiute Tribe and I guess Western High School reached out,” says Fawn Douglas, a part-time instructor with UNLV’s American Indian Alliance.  “The tribal council members voted they were not offended by it.”

The Moapa Paiute Tribal Council leader told the Current his council also has no objections to the mascot.

But Douglas, who teaches courses on racially charged mascots, noted there is a broad diversity of cultures within Native American tribes in Southern Nevada. The Moapa Paiutes have 355 members, and the Las Vegas Paiute Tribe has 55 members. The Census Bureau estimates more than 12,000 American Indian and Alaskan Native peoples live in the valley.

”Our Paiute culture is very different from the Plains Indian culture that Western’s mascot is trying to capitalize on,” she says. “It’s frustrating. There are a number of us who are Native Americans and we want it changed.  Back in March, there was supposed to be a series of meetings to help get the mascot changed. Never happened.”

A Western High School web page references meetings canceled earlier this year that were to be rescheduled, but makes no mention of new dates.

The Clark County School District declined to say why the meetings were not rescheduled or how its on-line survey came to be.

Discontent with mascots is not new to Las Vegas.  The UNLV newspaper changed its name from the Rebel Yell to the UNLV Scarlet and Gray Free Press and the school’s mascot “Hey Reb!” has been given a makeover to more resemble a “modern mountain man” than a Confederate soldier.  UNLV’s website dedicates a page to explaining its history of mascots and the Rebel brand.

Are racially-charged mascots detrimental to students?

The American Psychological Association says the “use of American Indian mascots, symbols, images, and personalities undermines the educational experiences of members of all communities-especially those who have had little or no contact with Indigenous peoples” and can create an “often times hostile learning environment for American Indian students that affirms negative images/stereotypes that are promoted in mainstream society.”

“Educate, don’t eradicate!” is the rallying cry of the effort to retain the mascot, says Mark Rivero, a Western alum and informal organizer.

“It’s important because it’s about the tradition and heritage of the students and teachers,” Rivero says, adding he’s spoken with Native American leaders who are proud of the affiliation with Western High and the Thunderbirds of the United States Air Force, who are stationed at Nellis Air Force Base and sport a Native American logo.  “It gives them a symbol of acceptance.”

“Some of these people weren’t even born and raised here,” says Rivero, a native Las Vegan who says he’s a descendant of Mexican Indians.

“I think it’s an uneducated argument in reality. Instead of taking things away, let’s educate people of all ethnicities,” Rivero adds. “It’s a diversity issue.  We’re a diverse population.”

Douglas supports the call for education absent the mascot and says she was appalled by the lack of knowledge Western High educators demonstrated during the only meeting activists have had with the school.

“The principal was open to listening to us.  I introduced myself as a teaching indigenous studies at UNLV. I asked them ‘can any of you educators tell me what tribe is represented in the murals around here?’  Crickets,” she says. “Nobody could tell me. They looked at each other, asked ‘do you know? I don’t know.'”

Tarkanian donated a statue of a Native American to Western High School years ago.  She says she’s a strong supporter of indigenous people and visited the school, which is not in her district, in an effort to help resolve the dispute.

“We should do something to educate about the culture of our Native American communities here,” Tarkanian says. “We could tell the story with dignity and respect, not tomahawks dripping with blood and other caricatures. The statue I gave the school is certainly a proud and dignified character.  Is that statue projecting a negative image?”

Tarkanian says the decision over mascots has long been left to individual schools.  She’s personally supporting the option to retain the mascot and develop a cultural center, and she’s hoping it’s with the assistance and support of those who currently oppose Western’s mascot.

‘They are still putting on war paint’

“They’ve been promoting this image but there are 570 plus recognized tribes, each with its own culture and identity. The meeting we had is the only meeting we had. It was supposed to be the first,” says Douglas.

“If you’re in education you shouldn’t be promoting race-based mascots.  They are still putting on war paint and using faux headdresses. Teachers and students alike are wearing red face, doing the war cry. These are racist stereotypes and they’re still doing this,” Douglas says.

“I thanked them for being open to hearing what we had to say.  Can you please cease and desist with the headdress, the war paint, the whoop cries,” she says. “The alumni stepped in and built their page.  They’ve been very hateful toward us.”

“The school has reduced the use of the chieftain visual in most of its current materials, including the school website, new school uniforms, etc.,” said CCSD spokesperson Mauricio Marin. “The school campus does have a statue and mosaic depicting the chieftain, among other structures and artwork.”

Rivero, a former Las Vegas High School teacher and retired firefighter, says all parties are expected to sit down with the school district after the September 14th deadline for the online survey.

The indigenous Americans who are fighting the mascot also have ties to the school district.  The student who originally complained about being distracted at a sporting event by the Western mascot is the daughter of Elizabeth Mercedes Krause-Marcos, a teacher for CCSD, who is active in causes supporting indigenous students.

“It’s going to take an education of the entire community because the pushback we’re seeing from the alumni, you have people really standing up for it.” Douglas says.  “In a sad way, the time in high school is their heyday. Why not fight for the future and these students’ education?” 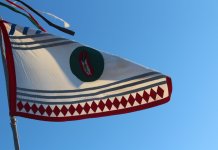 GC2 to IGT: No Coyote Moon for you