It was August of 2015 when Carson City Sheriff Deputy Carl Howell responded to a domestic violence call. A woman with visible injuries met Howell and another officer outside. Howell approached the door in an effort to meet with the suspect, Jonathon Pope.

“As Deputy Howell approached the door, Pope appeared armed with a firearm … Pope and Howell exchanged gunfire, resulting in both men being struck. Pope was pronounced dead at the scene and Deputy Howell died of his injuries later at the hospital. Additional units arrived on the scene and evacuated three children and one adult,” according to the Nevada Network Against Domestic Violence report on 2015 Homicides.

The scenario, or one like it, is repeated almost every day in America and too often in Nevada.

Howell and Pope are two of the many Nevadans who die as a result of domestic violence every year.

More women per capita die in Nevada at the hands of their current or former lover than in almost any other state.

Among Nevada’s many dubious distinctions is the state’s designation as the intimate murder capital of the nation.

Nevada ranked first in females murdered by males five of the six years from 2004 through 2010.

Nevada had the second-highest rate of females murdered by males in 2015 with 2.29 per 100,000, according to the Violence Policy Center.  33 women lost their lives that year.

Despite Nevada’s consistent ranking among the three states with the most domestic-violence-related homicides (Alaska and Louisiana are the others), a panel designed to dissect incidents in rural counties, and recommend ways to prevent them, has all but gone dark under the watch of Attorney General Adam Laxalt.

Under Laxalt’s administration, only two cases have been addressed by the Fatality Review Team, which formulated six recommendations as a result.

By contrast, former AG Masto oversaw reviews of seven rural cases and made 18 recommendations between 2012 and 2014.

A review by Laxalt’s team of a 2014 case from Ely brought forth two recommendations — a need for more mental health and counseling services, and victim services such as a domestic violence shelter in the area.

The second review by the Laxalt team took place in Fallon in December of 2016, where the team reviewed a local case from 2015 and made four recommendations — the need to provide sufficient support for victims of domestic violence during a prosecution, the behavior of batterers, the need to protect children, and a recommendation to lengthen the term of extended protective orders in Nevada, which expire after a year.

Despite the prevalence of guns used to commit domestic violence homicides, Laxalt’s Fatality Review Team has yet to make any recommendations regarding firearms.

He has also refused to enforce a gun background check measure approved by voters in 2016.

Under Laxalt’s direction, the Domestic Violence Fatality Review Team reviewed one case in 2015, one in 2016, none in 2017 and none in 2018 thus far.  An official from the Nevada Coalition to End Domestic and Sexual Violence, which assembles information on potential cases for review, says that information on 2017 cases will not be released until next summer.

Tara Phebus, director of the Nevada Institute for Children’s Research and Policy at UNLV, says the Fatality Review Team usually takes up two cases a year from rural Nevada counties. Laxalt’s office contracts with the institute to facilitate case reviews and policy recommendations, as did his predecessor, Catherine Cortez Masto, now a U.S. Senator.

Phebus attributes the lack of reviews in 2017 to a “legislative realignment” and says the panel had trouble finding another case to review in 2016. Only cases that have been adjudicated and are not on appeal can be reviewed by the panel.

The Fatality Review Team met once this year in March but reviewed no cases, according to the AG’s website.  Laxalt did not attend the meeting.

Calls to Laxalt’s campaign and to the attorney general’s office, as well as the Domestic Violence Ombudswoman in the AG’s office, were not returned.

Laxalt’s failure to address domestic violence fatalities comes as the national Violence Against Women Act is slated to expire at the end of the month.

The 1994 act signed by President Bill Clinton directed $1.6 billion toward investigating and prosecuting violent crimes, imposed restitution on defendants convicted of the crimes and allowed victims to sue their batterers in civil court in cases where prosecutors declined to prosecute.

In 2016, the last year for which statistics are available, the Nevada Coalition to End Domestic and Sexual Violence identified at least 26 victims of domestic violence-related homicides in Nevada, including three children who were killed in a family annihilation. By far most of victims, 18 of the 26, were killed by gunfire.

Most of the homicides, 21, occurred in Clark County which, like Washoe, has its own fatality review board.

Elko and Lyon Counties each had one homicide and in Pershing County, a perpetrator committed suicide after attempting to murder his wife, who was found alive with a gunshot wound to her head, according to the annual report prepared for the Fatality Review board.

In 2015, domestic violence-related homicides in Nevada claimed 43 lives.  While the majority were in Clark County, a number of homicides occurred in rural Nevada, including one in Nye County, one in Fallon, and one in Carson City. 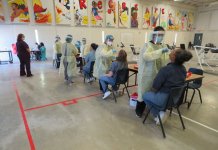 Gun bill provision restoring local control may be in jeopardy