Tuesday, Jeff Krajnak thought he might be going to jail.

“Well tomorrow is the big day. Sentencing and it looks like I’ll be alone in the courtroom again. Thanks for the support and see you guys in a couple years!” wrote Krajnak in a Facebook post.

On Wednesday Krajnak, an ex-Navy Seabee, was sentenced to five years probation in court for felony reckless driving and driving under the influence of marijuana— which he took medically for PTSD— after getting into a car crash that resulted in the death of another driver.

Results of a blood analysis showed Krajnak had more than eight times the legal amount of marijuana metabolites in his system and double the legal limit of the psychoactive ingredient in marijuana— THC.

Nevada criminalizes driving with a set amount of THC in a person’s system under per se law. The per se THC limit in Nevada is 2 nanograms per milliliter of blood or two parts per billion, a limit so low almost any amount of use can result in a conviction of DUI under the current law.

In the opinion of the state trooper who interviewed Krajnak after the crash, Krajnak was not visibly impaired and passed all field sobriety tests.

“This case poses a lot of questions for me,” said Judge Carolyn Ellsworth, who presided over the trial. “You’ve got an officer who says in his opinion the driver was not impaired so we’re going with the per se theory of liability.”

Road incidents involving marijuana-impaired drivers have been a major concern to lawmakers. The relationship between marijuana legalization, how to gauge impairment, and implement that into traffic laws is still relatively untested.

Unlike alcohol, there is little scientific research on what specific amount of marijuana in a person’s system means impairment. While alcohol is water soluble and goes straight to the bloodstream, marijuana is fat soluble, meaning different compounds can linger in body fat for long periods of time.

Eight states and the District of Columbia now allow for some recreational use of marijuana. These developments have spurred a number of questions regarding their potential implications for federal law enforcement activities and for the nation’s drug policies as a whole.

“It’s not legal as far as the federal government is concerned,” said Judge Ellsworth.

Other Schedule I drugs under the federal Controlled Substances Act include narcotics like heroin, LSD, and cocaine.

“I don’t like marijuana, I’ve seen too many people addicted to marijuana. I believe you can be addicted to it,” said Judge Ellsworth. “It’s not medicine. You don’t get a prescription. You just get the ability to buy it.”

Marijuana’s classification as a Schedule I drug means that it is not currently accepted for medical use according to the federal government, despite the legalization of “medical” marijuana in states.

“You see all these billboards that say ‘get your marijuana here’ but no one tells you about the per se laws,” Krajnak said in an earlier interview with the Current. “It’s all about how much the state can make off it. They are worried about how much tax money it brings. That’s all you hear. Tax money and lounges. You never hear about the legal ramifications from the state.” 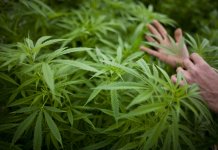 As Legal Aid Center turns 60, it pushes to endow its...