“Governor-elect Sisolak agrees with Governor Sandoval that the proposed amendments should be added to the agenda,” said Christina Amestoy, deputy director of Sisolak’s transition team.

Workers in Nevada file more sexual harassment complaints per capita than those in any other state, according to a Bloomberg story citing Bureau of Labor and Equal Employment Opportunity Commission statistics.

Despite the distinction, Gaming Commission Chairman Tony Alamo wants to wait on the proposed amendments until state investigators release a report on allegations against former gaming mogul Steve Wynn, a report Wynn is going to court to keep private.

“It’s not only Mr. Wynn, assuming that he did what is alleged,” says McGinley. “He’s not the only person who is alleged to be harassing people.  It’s not just the owners, it’s customers, too. We want the reputation of Nevada to be protected. The reputation of the gaming industry, if it’s too raunchy, it’s not going to do well.”

Alamo has declined to respond to numerous calls and emails from the Current asking for the rationale behind his position.   He was appointed to the Commission in 2008 by then-Governor Jim Gibbons and re-appointed in 2016 by Sandoval.  His term ends in 2022.

Meanwhile, Amestoy on Sisolak’s transition team declined to say whether the governor-elect will reappoint Control Board Chairwoman Becky Harris, who spearheaded the proposed sexual harassment amendments.

Harris is the first woman to lead the Control Board.  Sandoval appointed Harris to fill the seat vacated by former Control Board chairman A.G. Burnett, who resigned earlier this year.  Harris’ term expires January 27.

Unlike state and federal law governing sexual harassment, the proposed regulations could result in recourse against a resort’s gaming license.

“This was really an interesting, innovative thing to be doing,” says McGinley, author of Masculinity at Work: Employment Discrimination through a Different Lens. “Any of these big casinos can settle anything that comes before them but if you have recourse against their license, that’s a big deal.”

McGinley says she’s heard for the last six to eight months that the Gaming Commission would fail to act.

“I think the commission probably doesn’t want to get into it,” she says.

Resort operators, too, are clamming up about the proposed regulation that would require them to report to state regulators all valid complaints of sexual harassment, charges filed with the Equal Employment Opportunity Commission, and cases that go to court.

While Caesars Entertainment executive Jan Jones Blackhurst is on the record in support of immediate consideration of the proposed amendments, no other individual resort representatives stated outright support.

“We are closely monitoring the status of the proposed regulations and working to make sure we are fully compliant if they are passed,” Las Vegas Sands Senior Vice-President for Corporate Communications Ron Reese initially told the Current.

When pressed on whether the company supports the amendments, Reese responded “Las Vegas Sands declined to comment.”

The South Point did not respond to requests for comment, nor did Wynn Las Vegas attorney Ellen Whittemore.

“The Nevada Resort Association supports the amendments,” said Virginia Valentine, president of the association, which represents 59 properties in Southern Nevada and 12 in Northern Nevada.

“For many workers in the licensees’ industries, sexual harassment is an everyday indignity. To combat these transgressions, public governance boards like the Board will have to take active and affirmative steps,” Culinary Secretary-Treasurer Geoconda Arguello-Kline wrote to Harris in April.

The Culinary won anti-sexual harassment language in its contracts negotiated with union resorts this year.

“Union hotels are better at protecting employees from harassment than non-union. And I think the non-union hotels don’t want anyone to have additional control,” says McGinley.

McGinley sends her students into hotels to interview employees regarding their experiences and sexual harassment training.

“What I’ve found from my research is the vast majority of workers don’t know what sexual harassment is, they don’t know the policy and they don’t remember being trained,” she says.

Often the perpetrator is not a boss or co-worker, but rather a customer, creating a sticky scenario for casino supervisors.

“That’s a problem when the customer is a high roller customer.  You don’t want to have to kick them out,” she says. “I really think there’s a sense of people who come here that anything goes.  They don’t realize these are our sisters and our mothers. Just because someone wears a costume doesn’t mean you’re allowed to grab them.” 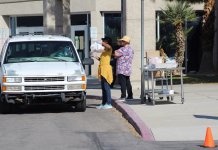 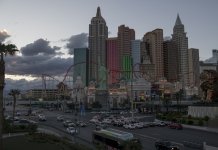