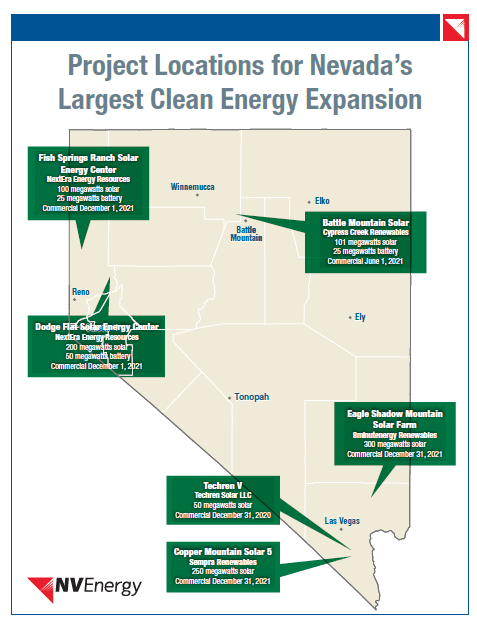 The six solar projects are expected to deliver 1,001 MW of solar energy and 100 MW of battery storage, allowing the utility to more than double its total renewable generation from 14 percent in 2017 to 32 percent by 2023.

The approved plan also gave NV Energy the authority to retire the unit 1 of the North Valmy coal-fired power plant at the end of 2021 – four years ahead of schedule. The retirement date is largely conditional and is dependant on several factors including the timely construction of the new power plants.

The IRP does not change NV Energy’s plan to retire North Valmy’s second unit southeast of Winnemucca by the end of 2025, but floated the possibility of converting the unit to a natural gas plant.

North Valmy Units 1 and 2 are the last utility-owned coal plants in Nevada.

According to NV Energy, its resource plan reduces NV Energy’s impact on the environment and reduces its generation fleet’s carbon intensity while producing significant economic benefits.

The company said the move to their new clean energy model would involve as estimated $2.175 billion investment in Nevada, provide an estimated 1,785 construction jobs, and approximately 76 long-term jobs.

The company said displacing coal-fired electricity with solar resources would save customers between $35 million and $52 million in the first 10 years.

As part of the order, the commission allowed NV Energy to spend about $22 million to connect the new projects to existing transmission lines, and a $720,000 upgrade to a 1.45-mile segment of transmission line in Southern Nevada.

The move toward renewable resources and clean energy by Nevada’s largest energy provider was welcomed by environmental groups and advocates.

“Nevadans made very clear last election they want more clean energy, and this early retirement announcement for the North Valmy coal plant helps us get there,” said Elspeth DiMarzio, Sierra Club Beyond Coal Campaign representative for Nevada. “Replacing the Valmy coal plant with new clean energy will save Nevadans tens of millions of dollars, create new jobs, and clear toxic pollution from our air and water. Closing this coal plant early is the right thing to do for Nevadans, and we are thrilled to see the Commission and NV Energy take this step.”

During the 2018 midterm elections, a majority of Nevadans approved Question 6, a constitutional initiative that would ramp up the state’s renewable portfolio standard to 50 percent by 2030. Question 6 must be approved by voters a second time in 2020 to take effect, unless legislators adopt it when they meet next year.

“We commend the Public Utility Commission of Nevada for reflecting the will of the people with its approval of this resource plan,” said Tom Polikalas, the Southwest Energy Efficiency Project’s Nevada representative. “Expanding and sustaining NV Energy’s energy efficiency programs, along with the large scale deployment of solar energy resources, provides a path for more affordable energy bills, job creation, and a cleaner environment.”