When 23-year-old Cody Arbuckle died after 19 days in rehab at Solutions Recovery, a Las Vegas drug and alcohol treatment facility, his mother, Kathy Deem, filed a complaint with state regulators.

“I wanted them to do an inspection on the house and staff,” says Deem, one of countless parents who have lost a child to the scourge of opiate addiction, which has turned drug treatment into a growth industry.

The inspection report says the investigation was conducted in February 2018 by the State Bureau of Health Care Quality and Compliance, seven months after Arbuckle’s death. It states “the complaint could not be substantiated due to a lack of evidence.”

But according to the inspection report obtained by the Current, investigators from Health Care Quality and Compliance (HCQC) never inspected the property on Pioneer Street where Arbuckle died, but rather a property on Montessouri Street, also owned by Solutions Recovery.

“Yes, they inspected the wrong place,” Deem says. “I told them they investigated the wrong address. I asked them to correct the inspection and they never did.”

“Health Care Quality and Compliance investigated the death in response to a complaint that was made 5 months after the individual passed,” Dr. Julie Kotchevar, administrator of the Division of Public and Behavioral Health wrote in an email to the Current. “Because the investigation occurred so long after the event, the investigation relied upon electronic records and interviews accessible only at the main office.”

So there was no need to inspect the facility, to learn where medications were kept, etc?

“It was determined that too much time had passed,” Kotchevar told the Current.

The episode illustrates the lack of state regulation of a burgeoning industry often alleged to be more focused on profits than patients.

Some 25 million Americans over the age of 12 are addicted to drugs or alcohol, according to the National Institutes of Health.  In 2016, about 1.5 million sought treatment from a publicly funded rehab facility. A fraction of those patients — 3,514 or .2 percent — died while in treatment.  That’s twice the death rate of publicly funded rehab facilities in Nevada, where just under 8,000 patients sought help in 2016, and eight patients are known to have died while in treatment.

But in Nevada and some other states, the number of deaths at non-medical private facilities, where private insurance picks up the tab or patients pay cash, is unknown.

American Addiction Centers, a national behemoth in the recovery industry, owns Desert Hope, a medical detox facility in Las Vegas, which accepts public money and is required to report sentinel events such as deaths to the state. The Current has confirmed two deaths at Desert Hope since 2016.

AAC also owns Solutions Recovery, which operates eight residential treatment facilities, a detox facility and Resolutions, a sober living facility — all in Las Vegas, and none of which accepts patients covered by Medicaid, Medicare or other sources of public funding.  The Current has identified four deaths at those facilities in the last 18 months.

Despite the popularity of Nevada as a destination for those seeking to kick their habits, state law does not require that deaths in such facilities be reported to regulators.

“The reason why it wouldn’t need to be reported elsewhere is because there’s no Chapter 449 regulatory requirement for facilities designated to treat ADAs (facilities that treat the abuse of drugs or alcohol) to report deaths or any other incidents that occur in the facility with the exception of disasters including fires,” says Martha Framsted, spokeswoman for the Nevada Division of Public and Behavioral Health.

The only way a death at a privately-funded, non-medical rehab facility is likely to come to the attention of regulators is if someone files a complaint.

“While the regulations do not specifically require all facility types to report deaths when they occur within the facility, a complaint is typically how the Bureau of Health Care Quality and Compliance (BHCQC) and the Substance Abuse Prevention Treatment Agency (SAPTA) are notified about a death connected to the care at a facility,” says Framsted.

Framsted was unable to say how many complaints the state has received involving deaths at rehabs.

“Health Care Quality and Compliance would have to review all investigations in the database on a case by case basis to determine if allegations (are) related to death,” she said.  “HCQC could review the database for death, but it would be labor intensive.”

“Deaths at licensed non-medical facilities clearly should be reported and the information should be available to the public,” state Senate Health and Human Services Committee Chair Julia Ratti wrote in an email to the Current. “I’m working with staff to determine if we need legislation or if this can be accomplished through the regulatory process.”

AAC faces wrongful death lawsuits in Nevada and has been ordered to pay a $7 million judgment in connection with the suicide of a patient in California.

But the company says its death rate is half that of the national average calculated for publicly-funded facilities.

“AAC’s Compliance Department found that, for the most recent full five-year period, sentinel events at the company’s facilities occur at a rate of one death for every 4,274 discharges – 10 times less frequent than the industry average shown in a 2010 SAMHSA study, which was one for every 422 client discharges,” says an AAC website to which the Current was referred by the company.

The most recent known death at one of the Las Vegas facilities was January 6, when Andrew “Drew” Sanders of Macomb Township, Michigan, hung himself on the doorknob of his room at Resolutions.

A Nevada Current survey of more than 30 state licensed, non-medical facilities for drug and alcohol dependence throughout Nevada revealed no deaths of clients while in treatment, with the exceptions of Solutions and its sober living home, Resolutions.

“We’ve never had one. It doesn’t happen,” said Dr. Mel Pohl of the Las Vegas Recovery Center. “It comes down to integrity and training.”

Lana K. Robards, Executive Director of New Frontiers, a treatment facility in Fallon, says the onus is on the facility to know the client and the level of care required by the individual, rather than accepting all who can pay.

“For instance, if a client is suicidal, it would seem to me a facility should do everything in their power to get people to a higher level of care,” she says. “If they have escalated to that zone, we secure them a bed at a mental health facility.”

Solutions and other non-medical drug and alcohol recovery facilities are regulated and licensed by the state’s Bureau of Health Care Quality and Compliance, which investigates complaints but does not track deaths.

“Beyond deaths at licensed non-medical facilities, I believe there’s broad agreement that the public would benefit from a broader set of indicators to help determine the quality of a non-medical licensed facility,” says Ratti. “It is my understanding that the Department of Health and Human Services is working on this and will propose new regulations on the administrative side of the process. Our regulatory process should result in families having the information they need to make choices about where to receive support and services.”

Deaths at rehab facilities across America are gaining media attention as the more than $35 billion a year industry comes under increased scrutiny.

But with a hodgepodge of state regulations, the number of deaths at all types of rehabs is unknown.

“The CDC’s National Center for Health Statistics (NCHS) does not have this data,” a spokesperson told the Current.

While no facility is identified in the sentinel events report, the 2016 death is likely that of Connor Johnson, who committed suicide by hanging himself at AAC’s Desert Hope facility on November 28, 2016, according to the Clark County Coroner.  A negligence lawsuit has been filed against AAC by Johnson’s parents.

“Defendants failed to take basic, minimum precautions to protect residents like Connor from self-harm, ignoring the safety measures that a reasonable person would find most obvious.  Specifically, Defendants allowed Connor to maintain unfettered possession of his leather belt despite knowing that just one month earlier he was hospitalized after being found with a leather belt around his neck,” the suit alleges.

The Current has confirmed the death of one patient at Desert Hope in 2018.  April Leeming was 33-years-old when she died in September of ethanolism, according to the Clark County Coroner.

AAC did not respond to requests for comment on this story.

Limited regulation of rehabs is not confined to Nevada.

The Oklahoma Department of Mental Health and Substance Abuse Services has come under fire for allowing Narconon facilities run by the Church of Scientology to continue operating in the wake of four deaths.

A 2017 investigation by the Boston Globe revealed state regulators are investigating two deaths at Massachusetts facilities owned by Recovery Centers of America, referred to by the Globe as the “self-described fastest-growing addiction treatment provider in the country. Launched less than three years ago by a high-end real estate developer, it’s part of a rush of entrepreneurs who see opportunity in the treatment business as the opioid crisis sweeps the country.” 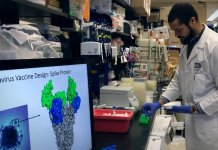 Electric school buses funded, but at a fraction of what advocates...