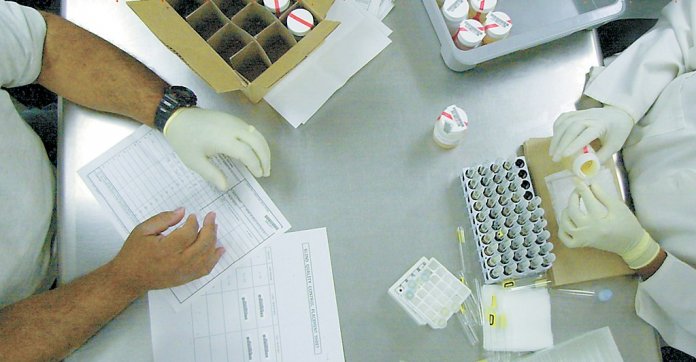 It’s a long way from Las Vegas to Tennessee — about 1600 miles by air. Yet each week, despite the presence of nearby labs in Las Vegas that charge about $130 for drugs screens, hundreds of vials of urine are shipped from American Addiction Centers’ drug and alcohol rehabilitation facilities in Southern Nevada to labs in Tennessee owned by AAC.  It’s the same routine at a dozen other AAC facilities scattered throughout the nation.

The company says in its annual report the tests are routinely ordered upon admission, on other occasions, and sometimes by physicians, who also work for AAC.

The widespread vertical integration of America’s health care industry, encompassing everything from lab tests to pharmaceutical distribution to the physician groups ordering the tests, is blamed by many for bloated costs resulting from conflicts of interest.

Nevada has similar laws that incorporate and go beyond the federal prohibitions.  But a tangle of exceptions at the federal level and a scarcity of case law in Nevada leave providers navigating a legal quagmire.

“The strict liability regime, huge penalties, and the breadth, complexity, and ambiguities of the Stark law and its regulations have created what is often referred to as a minefield for the health care industry,” says a Senate Finance Committee report.

The company’s annual report says it derived 51 percent of its 2017 revenue from “four treatment facilities located in California, Florida, Nevada and Texas.”

Ray (who did not want us to his real name out of concern for future employment), a Las Vegan who says he was troubled after witnessing the shooting massacre on the Las Vegas Strip in 2017, sought help for his addiction in 2018 at AAC’s Solutions Recovery.

An invoice obtained by the Current indicates AAC’s Sagenex Laboratory billed Ray’s insurance company, Cigna, $12,000 for nine urinalysis tests performed during a three week span.  The tests range in cost from $1,003.38 to $2,006.78.

“That was three weeks,” Ray says.  “I was there five months.”

In 2018, Cigna wrote to Ray, telling him the $2,503 he was charged for urinalysis performed in one day at Solutions should have cost about $140. Ray says Cigna paid the bill, minus his $575 co-pay, after notifying him that he was in an out-of-network facility.

According to the Healthcare Bluebook, $123 is a fair price for a drug screen in Southern Nevada.

Over-the-counter drug tests promising 99 percent accuracy are available for as little as $20.

“A ready cup test from a lab is like $7,” says Jeff Iverson, founder of Crossroads, a drug and alcohol residential treatment facility in Las Vegas.

AAC refused to answer questions submitted about its urinalysis charges and the potential for conflict of interest, as did its former regional vice president for Nevada, David Marlon.

Marlon, a candidate for Las Vegas City Council, sold Solutions Recovery, the company he founded, to American Addiction Centers.  Marlon says he resigned from the position in January, just days after announcing his candidacy for city council.

“In some cases providers may adopt a strategy to remain out-of-network, which can cause financial distress to the people who need their services and undermine health care affordability,” Cigna spokesman Joe Mondy said via email.  “When providers choose to remain out-of-network, we reimburse them at rates that are reasonable and in line with the usual costs for the treatment in the location where the service is provided.”

“Unlike providers who have a contract with us to be part of our network, out-of-network providers can bill customers for the difference between their already higher charges and what the individual’s health plan paid,” said Mondy.

AAC declined to respond to our questions regarding their contracting practices with insurance providers. The company’s 2017 annual report says that it’s generally known as an out-of-network provider.

AAC’s annual filing for 2017 notes “In-network providers typically provide services through third-party payors for a negotiated lower rate or other less favorable terms…. We receive the majority of payments from commercial payors at out-of-network rates.”

What percentage of Solutions’ patients are covered out-of-network? And what’s the difference in reimbursement?

AAC and Marlon have refused to say.

According to a 2016 Kaiser Family Foundation study, the mental health and addiction disorder specialty reaps the largest percentage of out-of-network claims.

Among workers who have large employer coverage, 33.5 percent of all inpatient admissions for psychological or addiction disorders include a claim from a non-network provider, according to a 2016 Kaiser Family Foundation study.

Pray, go to a meeting and call me in the morning.

Some 28 million Americans are addicted to alcohol or drugs, according to the NIH.  The Centers for Disease Control put the annual cost of opiate addiction alone at $78.5 billion.

Thanks to mental health parity laws, insurers must reimburse treatment providers commensurate with professionals who perform medical and surgical tasks.

Addiction, some experts say, is a medical disease.  Yet, in Nevada and many other states, “patients” are treated in facilities that exist in a regulatory limbo — designated as “non-medical,” and lacking the scrutiny applied to hospitals.

The vast majority of treatment programs are based on 12-step programs, which emphasize group meetings and devotion to a higher power — a far cry from the clinical treatment prescribed for most other diseases. Success and failure is nearly impossible to measure in the short-term.

Rehab facilities have a long history of testing and billing fraud.

A company called SelfRefind agreed to pay the government $15.75 million to resolve charges it violated the False Claims Act via fraudulent billing for urinalysis referred to a related laboratory that lacked the capacity to handle the volume.

A Florida man gave more than $463,000 in kickbacks to sober home operators for sending urine tests to the lab he represented.

One of the nation’s largest labs, Millenium Health, agreed to pay $256 million to the federal government to settle claims that it conducted unnecessary testing in Arizona.

Between 2011 and 2014, spending on urine screens by Medicare and private insurance quadrupled to about $8.5 billion a year, but standards for testing are non-existent.

In 2016, widespread fraud in the industry prompted Medicare, which covers those 65 and older, to change its policy on urine testing, including reducing the use of confirmation tests for initial results that show no substance use.

Guidelines issued by the CDC in March 2016 called for testing at the start of opioid therapy and once a year for long-term users. Beyond that, it said, testing should be “left up to the discretion” of the medical professional, according to a story from Bloomberg.

AAC’s annual report says it forms “professional groups” of doctors who act as medical directors of the company’s facilities.

AAC, in an annual report, says monitoring via urinalysis is an important part of treatment.

“Clients are evaluated for illicit substances upon admission and thereafter on a random basis and as otherwise determined to be medically necessary by the treating physician.”

Client-related revenue for AAC was $270.6 million for the year ended December 31, 2016.  About $65 million, or 24 percent, came from point-of-care and laboratory testing, according to the company’s 2017 annual report.

That’s down from 2015, when AAC derived 28 percent of its client-related revenue from lab testing.

Do doctors overuse services that benefit them financially?

Exceptions to federal and state law allow doctors to refer services as long as their compensation is unaffected by the “value and volume” of the tests, products or services they prescribe.

A 2013 GAO report found self-referred pathology services grew at a faster rate than non-self-referred services from 2004 to 2010. According to this GAO report, “the financial incentives for self-referring providers were likely a major factor driving the increase in referrals.”

“Business arrangements among physicians in the health care marketplace have the potential to benefit patients by enhancing quality of care and access to health care services,” says an American Medical Association’s ethics opinion. “However, these arrangements can also be ethically challenging when they create opportunities for self-referral in which patients’ medical interests can be in tension with physicians’ financial interests. Such arrangements can undermine a robust commitment to professionalism in medicine as well as trust in the profession.”

AAC has previously come under fire for its drug testing and billing practices.

In New Jersey, Blue Cross Blue Shield sued AAC over its testing and billing practices.  The case was settled.

A patient insured by Blue Cross/Blue Shield of Texas got billed for more than $30,000 for a month’s worth of drug tests at River Oaks, a Tampa, Florida facility owned by AAC.

Is AAC in compliance in Nevada with the law prohibiting self-referral? The company declined to respond. This is from AAC’s 2017 Annual Report:

“We monitor these laws and their implementing regulations and implement changes as necessary. However, the laws and regulations in these areas are complex and often subject to varying interpretations. For example, if an enforcement agency were to challenge the compensation paid under our contracts with professional physician groups, we could be required to change our practices, face criminal or civil penalties, pay substantial fines or otherwise experience a material adverse effect as a result.”

Experts suggest when physicians enter into arrangements involving self-referral that they: