Mining’s contamination of water continues long after the mining stops.

A plan to pump and pipe water from rural Nevada to Southern Nevada has long been blasted as aquifer mining.

Highlighting those threats to water resources, the Progressive Leadership Alliance of Nevada (PLAN) has created a pair of short films Tainted Thirst, and Great Basin Water Protectors, which debuted last week on World Water Day. Both films explore the worries of people who have the most to lose.

Tainted Thirst looks at the repercussions for local communities when mines leak highly toxic water that will have to be treated forever to make it safe.

The film opens with Rupert Steele, the chairman of the Confederated Tribes of the Goshute Indian Reservation, singing spiritual hymns against the backdrop of industrial equipment and mounts of waste material.

“That song has been sung for many generations,” Steele says in the film. “Over thousands of years by the Shoshone people to pay respect to the ore that’s underneath our feet.”

Two major issues are highlighted throughout the film: the effects of deep mine dewatering to gain access to minerals, and the impracticality of treating contaminated water in closed mines in perpetuity.

Most of the ore mined in Nevada is microscopic, requiring a complex chemical process to extract. Much of the mined ore is below the water table so massive pumping is required to keep the mine pit dry. When mining stops, so does pumping, and pits become lakes.

These lakes are often contaminated by sulfuric acid runoff, created when rock which hasn’t been exposed for thousands of years is pulled up and, once exposed, reacts with water and air to create sulfuric acid that dissolves heavy metals such as copper, lead, and mercury.

The acid then erodes more rock, creating more sulfuric acid in a chain reaction that can go on for decades, contaminating groundwater and surface water in the process.

“Several mines in Nevada are going to require perpetual treatment, that means forever that water is going to need to be treated. Not decades. It’s not even centuries. It’s millennia,” said Glen Miller, a retired professor of environmental chemistry at the University of Nevada-Reno and a board member of Great Basin Resource Watch.

“I don’t know of a company that has been around for thousands of years,” said Ian Bigley, mining justice organizer for PLAN. “Glen Miller, who’s in the film, likes to joke that the only institution that can do financial bonding for this issue is the Catholic Church because they’re the only ones that have been around long enough.”

This month, the Colorado Legislature passed a bill that would all but ban  perpetual water treatment. Last month in Montana, a

After debuting the film, Bigley urged viewers to write to their elected officials and lawmakers about banning the practice of accepting perpetual treatment as a viable solution to mine water pollution.

“We’re never going to be able to match the organized money of these mining companies,” Bigley said. Lawmakers “need is to hear that their constituents care about it.”

Mining has always been a powerful industry in Nevada tracing its clout back to Nevada’s constitution, which was written and approved by the mining industry.

The mining industry in Nevada and elsewhere has long argued that water resources are sufficiently protected by environmental regulations and state bonding requirements.

In his previous work as a medical assistant, Bigley said he traveled throughout rural Nevada assessing older patients. On one of his home visits in Schurz, Nevada he met a man who used to live in a downwind community from the old nuclear testing site.

“He started telling me a story of how when he was a little kid he remembers going out in the summertime and it looked like it was snowing and that was ash from nuclear fallout falling on him,” Bigley said.

The experience made the dangers of uncontrolled environmental pollution real to him and he spent a year filming communities across the state, conducting interviews with rural residents who live closest to the mines.

The film is intentionally structured around the human experiences of communities living near the mines and their stories, as opposed to what you often see in mining documentaries which tend to show repeated images of very large trucks against a soothing soundtrack.

“We really wanted to humanize the issue with different communities,” Bigley said.

Perpetual treatment is more than an economic or environmental issue, said Bigley, but a moral issue as well.

The abandoned Anaconda mine, once owned by Quaterra Resources and Anaconda Copper, predates regulation and has contaminated the groundwater near Yerington, Nevada. The Yerington Paiute Tribe has fought for cleanup of the mine for almost 18 years, said Chairman Laurie Thom.

British Petroleum pays to have water delivered to the residents of the reservation while the Yerington Paiute Tribe pays to operate a water processing facility to clean their tap water.

“We have no idea how long we can continue to clean the water because the medium does cost so much and we don’t have enough homes to keep us on the positive side to provide that clean water. But it’s a necessary component to live and we have to provide that to our people,” Thom said.

Her film starts with various video clips of the gruesome scenes that played out during the protests over the Dakota Access Pipeline, which garnered international attention to the indigenous people behind the movement.

The protests inspired Harry to make a film about the Southern Nevada Water Authority’s “Groundwater Development Project,” a proposed 250-mile water pipeline project would build a to carry 27 million gallons of groundwater each year from rural Eastern Nevada aquifers to Southern Nevada.

In October, ten indigenous environmental activists ran 300-miles along the proposed path of the groundwater pipeline, in the Water Protectors Sacred Run.

“I wanted to be part of the Standing Rock movement. I didn’t want that movement to die,” Harry said.

Running has cultural resonance to the indigenous runners. Long-distance runners were traditionally used by tribes as a method of carrying messages and news across large territories. The Pueblo Revolt of 1680, which expelled the Spanish from the Santa Fe area in present day New Mexico and staved off the Spanish for another 12 years — the only outright expulsion of European settlers in North American history — was organized by dispatching runners.

Legal and regulatory challenges from environmentalist, ranchers, local governments, and tribes have argued over the years that the pipeline will draw down aquifers beyond their capacity to naturally recharge – that the project effectively amounts to groundwater mining, and will irreparably harm rural communities and natural wetlands where some of Nevada’s rarest and most vulnerable species live.

Part of the groundwater sought by the SNWA included water that feeds into the Swamp Cedar Area within Spring Valley of east-central Nevada, a valley of significant cultural importance for the Western Shoshone and Goshute tribes. The tribes believe any water siphoned from these aquifers would damage the swamp cedar tree’s in their ancestral home.

Many uncertainties surround the hydrology of the groundwater system that connects the groundwater basins where SNWA has water applications. How much water is available in the aquifer system is not known with any high degree of confidence. The extent of groundwater flow through and between the basins is also unclear, and it has not been determined how a large-scale pumping project will affect those basins or the ancient trees that depend on their water.

As one of the last sheepherders on her home reservation, Harry recalls struggling to siphon enough water for the animals. As an adult, she worked as a fishery biologist monitoring water quality for one of the tribes in Arizona. Last January, she quit and joined PLAN in its indigenous conservation efforts. She has always been pulled in by the forces of water.

“I only see two options: To be a leader or be a bystander, and nobody can take a middle ground. So which one are you going to be?” 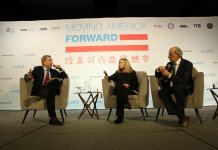 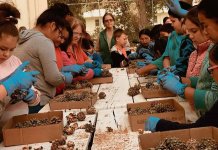