Charter schools often market themselves as autonomous institutions where progress and best practices aren’t hindered by bureaucracy, and where parents can play an active role in education and affect change.

But one parent believes the majority of charter schools are failing to follow state open meeting laws and possibly leaving parents like him out of the decision-making process when it matters most.

Nevada open meeting law requires public bodies supported by tax revenue to be transparent in their decision-making process. Specifics include providing the public with three-days notice before meetings are held, allowing for public comment periods, and only discussing what appears on the agenda.

Tetirick’s interest in open meeting laws stems from the handling of Discovery Charter School, where his children were enrolled. In 2017, the charter school was flagged for potential closure by the charter authority due to chronic underperformance. When a charter school underperforms, the authority can close it, replace its governing board with new members, or appoint a receiver to take over.

Tetirick says he and other parents were blindsided by the news and found out their school might be shuttered from local broadcast newscasts. Happy with his children’s experience and performance at the school, Tetirick spoke at a charter authority meeting in support of the school. He says he and other parents wanted the school to reconstitute the board and had ideas on who could serve and help turn the school around. They asked to stay in the know.

“They didn’t tell us anything,” he says. “They intentionally kept us in the dark.”

Public bodies found in violation of open meeting laws are often given this slap on the wrist. More severe violations — for example, conducting a closed meeting that should be open to the public, or discussing an issue that isn’t on the posted agenda — can result in the voiding of decisions that were made.

By the time the attorney general’s office ruled on Discovery, Tetirick had already pulled his children from the school. He was shocked at how long the decision took, noting that a year is one-third of a middle school tenure and one-quarter of a higher school. Still, he says that ruling might have been the end of it. Instead he was left with a nagging question: Was being left in the dark an anomaly or was this the norm?

That’s when he decided to audit other charter schools. He began asking individual charter schools to provide him notice of upcoming board of director meetings, then follow up to see whether they did. He would see if the documents were posted to the state’s public notice website. He would ask for minutes of previous meetings or supporting documents relate to agenda items, then track their responses.

He describes what he found as a “massive failure” of transparency.

Only one charter school — Beacon Academy — met all his requests. The other 33 charters he audited fell short in some way. Many failed to post upcoming agendas within three working days. Some outright ignored him. Others returned minutes or supporting documents late. One school forwarded him to its attorney, who engaged in a lengthy back-and-forth and requested a fee for receiving an audio recording of a previous meeting.

Some questioned him. When pressed on why meeting minutes were not available within 30 working days as required by state law, a board member at Ely Learning Bridge Charter School simply responded: “Just out of curiosity, why are you interested in Learning Bridge?”

Others seemed mildly dismissive. “I’m not quite clear who you are or how we can help you,” read part of a response from the director of Futuro Academy.

One school extended a friendly invite. The principal of Equipo Academy responded to Tetirick by noting the school had googled him and noted his previous involvement with Discovery: “We would love to learn more about the issues and items you are interested in and to show you the campus if you like.”

Tetirick says he doesn’t have anything against charter schools and he isn’t looking for some “gotcha” moment that embarrasses or takes anyone down. He suspects schools within traditional public school districts and other smaller, lesser known public boards also deal with this same lack of transparency and intentional non-promotion of board meetings.

“This is just where I started,” he explains. “Beacon gave me everything I asked for. Great. They said, ‘Anything else you need?’ Nope. I’m done. That’s how it should be. That’s what I wish had happened. I’m not looking for a fight.”

For Tetirick, everything comes down to the principle of open government.

“Go to all of these schools, go to their websites,” says Tetirick. “They all have calendars that have soccer, football, choir. None of them have any information about when the next board meeting is. You can maybe go to the governing page and after three dropdown menus maybe find them. Maybe.”

Tetirick notes his audit has focused on “simple” information like notices of upcoming meetings and minutes or recordings from the most recent meeting to meet the state-mandated timeline for availability. He didn’t single out board meetings with controversial agenda items. He wonders: If charter schools are this resistant to addressing simple requests, how might they respond when there is more is on the line?

On their end, the Nevada State Public Charter School Authority board has also been the subject of a Tetirick complaint. The attorney general found the authority to be in violation of an open meeting law, but like Discovery they only had to post the decision, which they promptly did at their next meeting. That decision, released earlier this year, took two years to be released.

In February, the charter school authority board had agendized a training on open meeting laws, complete with a Powerpoint on how to stay in compliance. The meeting ran long and the item was pushed back. The training is expected to be revisited at next month’s board meeting.

According to the state charter authority, the open meeting law agenda item is unrelated to Tetirick and is a part of an ongoing series of planned trainings about charter schools, which will also include information about how the authority’s authorizing process works. The authority also regularly highlights the work of its high-performing schools in order for others to learn from them.

The Current reached out to the charter school authority for a response to Tetirick’s allegations of widespread open meeting law violations but did not receive one by deadline. 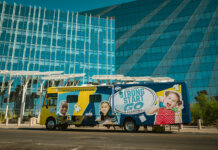