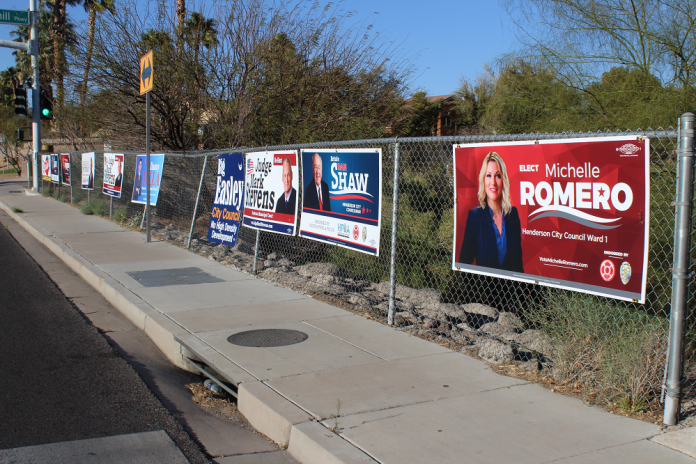 The ink was barely dry on former Henderson redevelopment manager Michelle Romero’s retirement when the 25 year veteran of city government told Councilwoman Gerri Schroder of her interest in the term-limited Schroder’s seat.

“I sat down with her a couple of months after I retired and said this is something I’d really like to do, with my background and experience,” Romero says. “She said ‘That would be great.’  Because she worked with me for so long and saw the things that I was capable of doing, she thought I’d be a good person to run for that office.”

The fate of the seat was likely sealed three years ago, long before filing had opened.

Schroder did not respond to our inquiry about why she’d commit to a candidate three years early and without knowing who would enter the race.

“It’s not unheard of for an incumbent to endorse before knowing who the candidates are,” says UNLV Political Science professor David Damore.  “It’s a way to signal to potential candidates that these are the anointees and you’re not going to have any institutional support and that probably factors in to donors.”

“There’s no passing the torch in the United States of America,” says Ward 1 candidate Danny Vella, a lifelong Henderson resident, who at 18, is just old enough to vote.

Anointments such as Romero’s are facilitated by the small-town nature of Nevada’s second largest city, where four of the five sitting council members were initially appointed, not elected, to the council. (Only Schroder was originally elected.)

“How is that a reflection of the community?” asks Vella. “That’s an insult to our democracy. People should be able to vote.”

“It seems to scare out quality challengers,” said Damore, who is also a Henderson resident, of the Henderson Council’s penchant for appointees who don the mantle of pseudo-incumbency and easily ride to victory.  “I was going through my ballot and tried to find some information on the candidates and most don’t have websites, other than the insiders.”

Dan Shaw, also appointed in 2017, has one challenger, Earnest Caalim.

If she wins, Romero will be the council’s only “double-dipper,” meaning she’ll be collecting public retirement while being paid a government salary as a councilwoman.

Henderson’s electoral scheme, whether by accident or design, favors incumbents and candidates well-funded by special interests.

Unlike Las Vegas and North Las Vegas, where voters in each ward choose a representative for their ward alone, Henderson candidates run at-large — meaning voters cast ballots in races for all wards.

“It makes campaigning difficult since you can’t walk just one ward and because the demographics are so different,” says Vella.  “In Ward 1, we have more poverty than others, so I’d think the people in this ward would want someone who represents their concerns. Instead, moneyed interests choose people for every ward and you don’t have diversity on the council.”

Assembly Bills 50 and 282 seek to change the law to limit voters to selecting candidates in the wards where they reside. Mayoral elections would remain at-large.

The National League of Cities says council members in at-large systems “can be more impartial, rise above the limited perspective of a single district and concern themselves with the problems of the whole community.”

But the NLC goes on to say at-large elections “can weaken the representation of particular groups, especially if the group does not have a citywide base … or is an ethnic or racial group concentrated in a specific ward.”

‘It’s always from the inner circle’

“Obviously, you have very low turnout with off-cycle elections, limited competition, and rarely do these incumbents ever lose,” says Damore. “It would be interesting to see if that bill passes to see how that affects fundraising and other things.”

The Henderson City Council, which spends hundreds of thousands of dollars ($600,000 in 2017) to hold Spring municipal elections in addition to standard November elections, repeatedly declines to fill council vacancies via special election.

“It’s a huge red flag,” says Vella. “They have the option to go to a special election.  They always choose to make an appointment and it’s always from the inner circle. It’s a revolving door.”

Dan Stewart was a Henderson planning commissioner before being appointed to the council. He was unanimously selected from a field of 16 applicants. Then-Mayor Andy Hafen disclosed his son-in-law is Stewart’s nephew.

Dan Shaw was the chairman of the Henderson Planning Commission for 13 years before his appointment, according to his campaign website.  Shaw is also Stewart’s former business partner. Both were managers of development companies, Horizon Henderson LLC and Sunset Springs LLC from 2004 to 2006, and St. Rose Village, LLC, incorporated in 2005, according to state records.

In 2012, the council appointed John Marz, who said at the time he would not run for election to the seat the following year. He has since been elected twice.

Romero shares not only a campaign manager (Jim Ferrence)  but also a publicist (Elizabeth Trosper) with the other city council members and Mayor Debra March.  Trosper, who owns Trosper Communications, also represents the Henderson Firefighters Association, which negotiates contracts with the city and endorses candidates.

Trosper says she had a contract with the city three years ago to provide ten hours a month of public relations services, until her council relationships drew media attention.

“When the agency you hire to help you work with the media becomes the story themselves you no longer are helping them and I had to terminate the contract,” she says.

Trosper represents many of the business interests that come before a generally pliant council.

The city’s “pro-business at all costs” approach is a mistake, says Vella.

“You have council members who are there to do the bidding of developers who max out on campaign contributions and have their way, at the expense of taxpayers.  The council members know someday the growth will have to stop, and eventually they are going to have to raise taxes,” he says.

“I think it’s ridiculous,” says Romero, a lifelong resident of Henderson.  “Coming from the perspective of a staff person, a project goes through months and months of review before it ever gets to the council”

But does growth pay for growth in the long run?

“If you do it correctly, it can.  You have to be smart about thinking into the future and know what you want from the developers before you enter into negotiations with them,” says Romero.

But she admits the city, though it has the capital for fire and police stations, is struggling to find funds to pay first responders.

“I call them the Henderson Mafia,” says Vella.  “They are a group. The candidates they all want in office are all represented by Elizabeth Trosper. They have the same endorsements — all closed door interviews, not open to all candidates.”

The Henderson Professional Firefighters Association, represented by Trosper, did not respond to our requests for comment.

The Henderson Chamber of Commerce confirmed in a statement it did not meet with all candidates.

“The board reviews all candidates and exhausts a list of criteria and considerations before proceeding in hosting a meeting,” the chamber said.

Not surprisingly, Shaw, Stewart and Romero won endorsements from the Henderson Chamber.

“All those folks are going to end up winning and they won’t be close,” says Damore of UNLV.

Note: This story was updated with comment from Assemblywoman Ellen Spiegel.

Anointment politics alive and well in Henderson, of course