Emotions ran high during a three-hour joint Assembly and Senate Judiciary Committee meeting on legislation that would ban bump stocks in Nevada and give local municipalities the ability to pass gun laws.

Supporters, including survivors of the October 2017 Mandalay Bay mass shooting, told stories of the effects of gun violence as they pleaded with lawmakers to make changes to current state laws.

Opponents said they feared infringement on the Second Amendment and warned proposed legislation could have unintended consequences.

Assembly Bill 291 was presented Monday morning by Assemblywoman Sandra Jauregui. who said the legislation is simply a way for Nevada to address gun violence.

“This isn’t an anti-gun bill,” Jauregui said. “I’m not an anti-gun legislator, and this isn’t a partisan issue. I’m married to a Republican and we own guns and we believe that better gun laws make us better gun owners.”

If passed, AB291 would restore the power of local governments to regulate guns. In 2015, the Nevada Legislature passed a law giving the state power — at the expense of local control — to regulate the transfer, sales, registration and licensing of firearms, accessories and ammunition.

“Due to the preemption law change in 2015, representatives in Clark County and Las Vegas were barred from acting after the tragedy in 2017,” added Annette Magnus, the executive director of Battle Born Progress, referring to the mass shooting at Mandalay Bay. “It is now time to change these laws that were championed by the gun lobby.”

The measure’s opponents argued there is a need for the state to retain authority over gun regulations so gun laws don’t differ from county to county.

“Repealing this section is a step backwards in ensuring citizens know the law and what is required of them and will have no impact on public safety where criminals will ignore local restrictions just as they ignore existing state and federal laws,” said Daniel Reid, the western regional director of the National Rifle Association.

The bill would also prohibit semiautomatic firearms from being modified, which drew testimony from survivors of the Mandalay Bay mass shooting, in which the shooter used a bump stock, which increased his capacity to shoot. Several survivors, including Jauregui, shared tear-filled testimony about that night.

Opponents of the modification provision argued some people must make changes to their firearms because of disabilities or medical issues like arthritis. The NRA’s Reid added the section would “subject otherwise law-abiding Nevadans to felony penalties for common firearm modifications as well as a confusing patchwork of firearm restrictions.”

The bill also decreases the legal amount of alcohol that can be present in the blood of a person in possession of a firearm from .10 to .08, but that section of the bill wasn’t criticized as much as the other components.

The hearing for AB291 isn’t the first gun-related measure lawmakers have addressed this session — nor is it the first time people came out in droves to testify in support and opposition.

During the second week of the session, lawmakers passed, and Gov. Steve Sisolak signed, legislation to close a loophole that allowed gun buyers to avoid background checks by going through unlicensed gun sellers. The legislation was a response to a 2016 ballot initiative that passed but never enforced.

The joint Assembly and Senate Judiciary Committees are also scheduled Monday to hear Assembly Bill 153, which would make it illegal to negligently store or leave a firearm around children under 18. 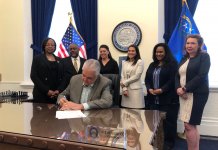