As everyone knows, the Mueller report, as hastily skimmed by Attorney General William Barr, proves conclusively that Donald Trump is the finest human being ever to walk the earth, greater than Jesus, greater than Lincoln, greater, even, than Fred Rogers.

And since Nevada is one of the early states in the presidential selection process, albeit the most ignored one, those Democrats visit us — Kamala Harris earlier this week, Elizabeth Warren this weekend, Pete Buttigieg Monday, and, according to my inbox, Bill de Blasio Friday & Saturday. The New York mayor, unlike his South Bend counterpart, has not been a super active prezzy candidate who has raised millions of dollars. Also, funny thing: Quinnipiac polled de Blasio’s constituents about the prospect of their mayor running for president, and the response was an overwhelming “dude, don’t even bother, jeesh,” except they said it more nicely, like New Yorkers do.

Meanwhile, here is the most interesting (to me, anyway) thing about Buttigieg: His recently deceased dad was a professor of literature and literary theory at Notre Dame who, among other things, was editor and translator of a multi-volume edition of Antonio Gramsci’s Prison Notebooks. As I think I’ve said before, to suggest I am a Marxist would be to assume I have given the matter much more thought than I actually have. (Although I am not unsympathetic to the suggestion, heard occasionally, that we are all Marxists now, because Marx, like Freud, had just that much impact on our collective understanding of the world around us. But again, I digress). Also, critical theory is hard, and so generally above my pay grade. That said, a few years ago after being fired from some job or other I had some time on my hands and found myself sort of nosing around in the writings of Michel Foucault, which as everyone knows usually leads one backwards (chronologically, anyway) to Gramsci.

There’s a cartoon that captures the might-have-been dialogue between Gramsci and Foucault, which I will paste here even though for the life of me I can’t seem to find any information about who made it. 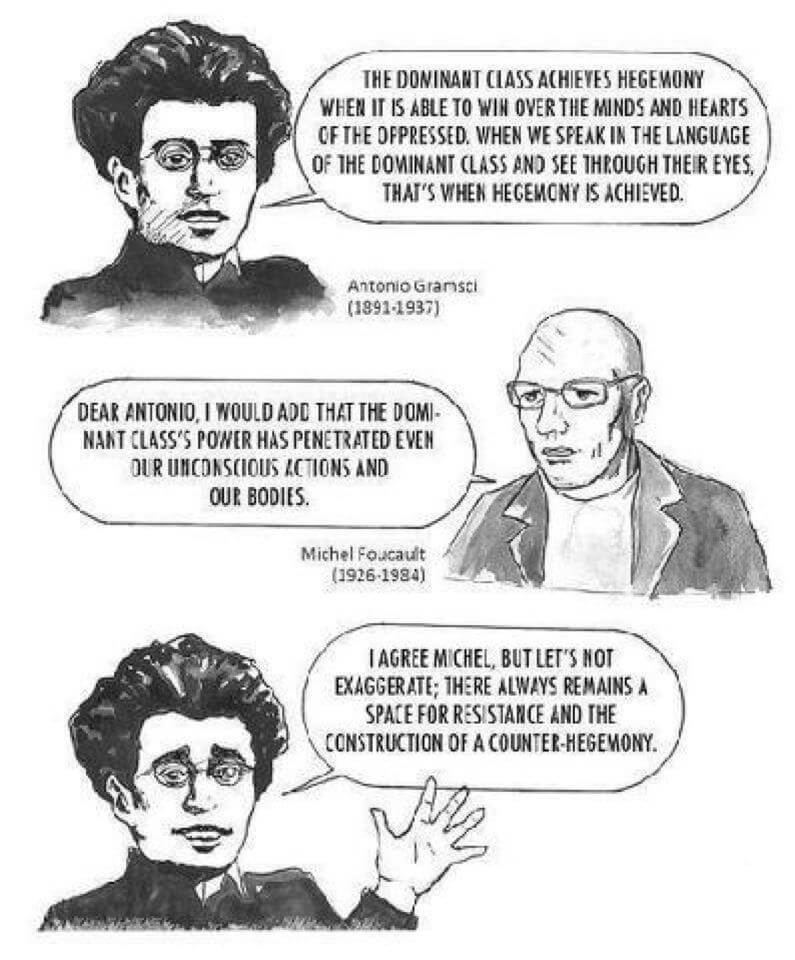 Hegemony and dominant narratives and the like are very useful concepts, or conceptual tools, if you will, to keep in the back of one’s noggin! Especially when one is trying to make sense of why politicians and voters think some things are nice but other things are not nice, or too nice, or too ambitiously nice but ewww radical, do not want!

Again, I’m no expert, but Ima tell you anyway: Foucault can be a downer, man. Brutal. But I, ever the optimist, prefer to think Gramsci is right, resistance is not futile, and the dominant narrative can be shifted and changed, the needle of public opinion can be moved, and we can have nice things.

As the prezzy wannabes parade through Nevada (but Iowa and New Hampshire and South Carolina more) there is lots of talk — even among some Democrats — about “oh my stars and garters they are too radical.” Leading contenders for the Democratic nomination are proposing taxes on wealth and establishment of universal affordable child care and of course Medicare for All and reparations for slavery and come on! Who among you thought that sort of thing would be happening in your lifetime, especially if you’re a late-middle aged guy like me? Is that cool or what?

Make no mistake, the hegemony is still super strong. Brand polishing and faith in the superiority of “market solutions” and the fetishization of individual success at the expense of the public good are all still viewed as just “common sense,” as reflected when policy prioritizes tax incentives for business over wages for workers, or policymakers emphasize “workforce development” and educational “choice” while ignoring economic and social conditions that determine one’s success or failure more certainly than attendance at some charter school.

But the dominant narrative is being challenged. Even on the presidential trail. And Nevadans get to watch, weigh, and measure it, up close and personal. Enjoy.

Anyway, I’d still like to know who made that cartoon. It was probably some grad student in the 1980s — maybe somebody who studied with Pete Buttigieg’s dad. Maybe Pete knows!

If anyone does, let me know, so I can find the creator, turn to oppressive market forces that exist first and foremost to prop up the dominant class, and use some hotly branded mildly high-end gift food outlet to send the cartoon author a box of fashionable food products. The hegemony has worked me over pretty good, you see.

Trump spread claims of election fraud debunked by his own… by Jacob Fischler June 13, 2022
What to the slave is the Fourth of July? by Frederick Douglass July 4, 2022
Inspection reports at LV slaughterhouse detail filth,… by Dana Gentry July 14, 2022