Immigrants who use marijuana may lack the “good moral character” required to become citizens, according to a Trump administration edict issued late last week.

The policy guidance from the Department of Homeland Security also “clarifies that an applicant who is involved in certain marijuana-related activities may lack good moral character if found to have violated federal law, even if such activity has been decriminalized under applicable state laws.”

In other words, immigrants who work legally in the cannabis industry could be deemed ineligible for citizenship as a result. The industry employs about five thousand people in Nevada.

“I think it is likely to be used. Marijuana has a strange legal status today — legal in state law, and illegal in federal law,” said Professor Michael Kagan, Director of the UNLV Immigration Clinic. “How they enforce something like this is quite discretionary.”

Cannabis use is legal for recreational purposes in ten states and for medical use in more than two dozen.

“The president and this administration constantly trying to pick out places to hurt immigrants, legal immigrants, I think is wrong and destructive,” said Senator Jacky Rosen (D-NV), who attended a round table Monday with Nevada cannabis industry representatives.

The office of Rosen’s colleague, U.S. Sen. Catherine Cortez Masto, did not respond to a request for comment.

Communities of color are disproportionately damaged by the war on drugs, the director of the Drug Policy Alliance, Michael Collins, told the Washington Post.  But this is different.

“Taking a step back, this has nothing to do with cannabis — this has to do with this administration never passing up an opportunity to prosecute immigrant communities,” Collins said. “They see cannabis as a ripe opportunity for persecuting these individuals.”

About one in five Nevadans is an immigrant, according to the American Immigration Council.

The policy poses a political risk for Trump.  More than six in ten Americans favor the legalization of marijuana, according to the latest Pew Research poll. Republicans are evenly divided over the issue.

The Silver State’s green rush has been a boon to wide swaths of citizens who are no longer forced to break the law in order to obtain marijuana.

It’s also been a boon for local and state governments, which are reaping the taxes and licensing fees associated with the $50 million a month industry.

And it has provided employment opportunities at both ends of the state.

“Over 5,000 Nevadans work in the marijuana industry and their moral character is beyond repute — unlike the president, who is truly immoral,” said Clark County Commissioner Tick Segerblom, the driving force behind cannabis legalization in Nevada.

What do state leaders say about their efforts possibly posing an obstacle to law-abiding immigrants seeking citizenship?

“This is yet another example of the Trump administration’s shameful anti-immigrant agenda,” Governor Steve Sisolak said in a statement  “My administration is committed to helping new and aspiring Americans participate fully in Nevada’s society and economy, which is why creating the Governor’s Office for New Americans is a top priority of mine this legislative session.”

“I’m glad they came out with something,” says Riana Durrett of the Nevada DIspensary Association, who previously practiced immigration law. “But i don’t know why it involves moral character. That’s sounds like Jeff Sessions.”

The state of Colorado recently notified residents that two applicants had been denied citizenship because of their employment in the marijuana industry.

“I’m not surprised they’ve done that in this administration, unfortunately,” says Krystal Saab, general counsel for The Source, a Las Vegas dispensary. “They’ve been leading up to that from what we’ve heard.”

“It’s going to set back our industry and our immigration system. People are forthcoming. They’ll be asked where they work. They’ll provide that information and it will be used against them,” Saab said.

Although permanent residents are eligible to receive medical marijuana cards in Nevada, Durrett says the drug’s illegal status at the federal level is enough to render it off limits for immigrants seeking naturalization.

“I’ve advised people in the past — don’t bring people in on business visas to work in the marijuana industry because there are no business visas for that purpose,” she cautions. “But there could be people who are permanent residents and want to naturalize and now they wouldn’t be able to do it.” 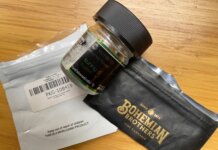 Trump: Citizenship hopes could go up in smoke for pot users, workers