A Nevada teachers strike may soon be on the table.

Long threatened as a possibility, the union representing Clark County School District’s 18,000 licensed teachers is now formally asking its members to authorize a strike for the beginning of next school year.

The Clark County Education Association announced the forthcoming vote via an email sent to members Tuesday. Signed by President Vikki Courtney and Vice President Theo Small, the email states voting will begin next week: “CCEA members will decide whether to authorize a strike at the beginning of the next school year if CCSD is indeed forced to make budget cuts because they do not receive the resources our schools need.”

The timing of the email is not coincidental. Teachers received the email one day before the State Economic Forum, during which economists will project how much revenue will be available for the upcoming biennial budget cycle. The Economic Forum, which begins Wednesday morning, signals the beginning of budget battles that will likely last until the end of the session on June 3. 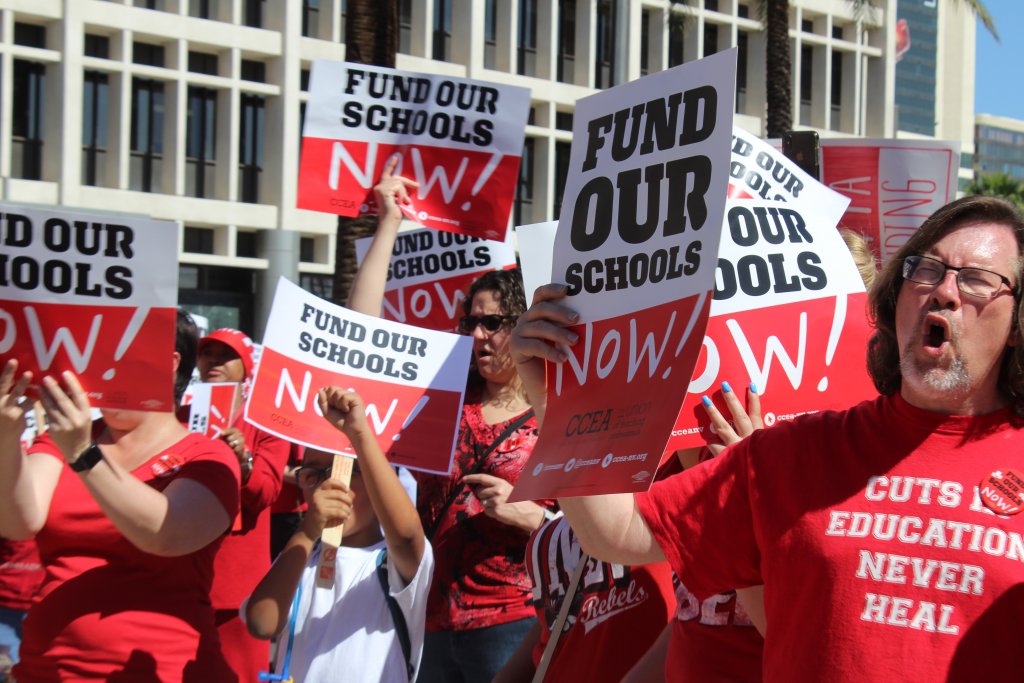 The last day of the current school year is May 23.

CCEA notes in the strike authorization vote email that CCSD needs “$120 million more annually on top of what’s already been budgeted.” District officials, including Superintendent Jesus Jara, have already publicly stated that budget cuts may be necessary next academic year, and that there is not enough money to honor the 3 percent raises publicly promised to educators by Gov. Steve Sisolak during his State of the State.

The Guinn Center backed up that assessment this week with its K-12 education finance policy brief, which concluded that “given the current State of Nevada budget, along with projected local revenues that are included inside the Nevada Plan, there is not enough funding to adequately cover a 2019-20 per pupil funding figure that includes a 2 percent ‘roll-up’ and a 3 percent (cost of living adjustment) increase.”

The 2 percent roll-up figure refers to the increases teachers are scheduled to receive annually as part of the collective bargaining agreement negotiated between CCEA and CCSD. Those salary increases have been frozen, or not fully honored, for several years due to district budget shortfalls.

CCEA has argued that school districts need a dedicated funding stream for teacher salaries, which make up the lion’s share of any district budget, in order to end a zero-sum district budget game that has in the past paired teacher raises with increased class sizes or other hardships.

In March, CCEA issued a poll to members asking them how far they would be willing to go to send a message to legislators that education funding must be increased. That poll included expressing support for a teachers strike. Since then, Executive Director Jon Vellardita and others in leadership at the union have mostly used noncommittal language when asked about the possibility of a strike, saying something to the effect that “everything is on the table.” 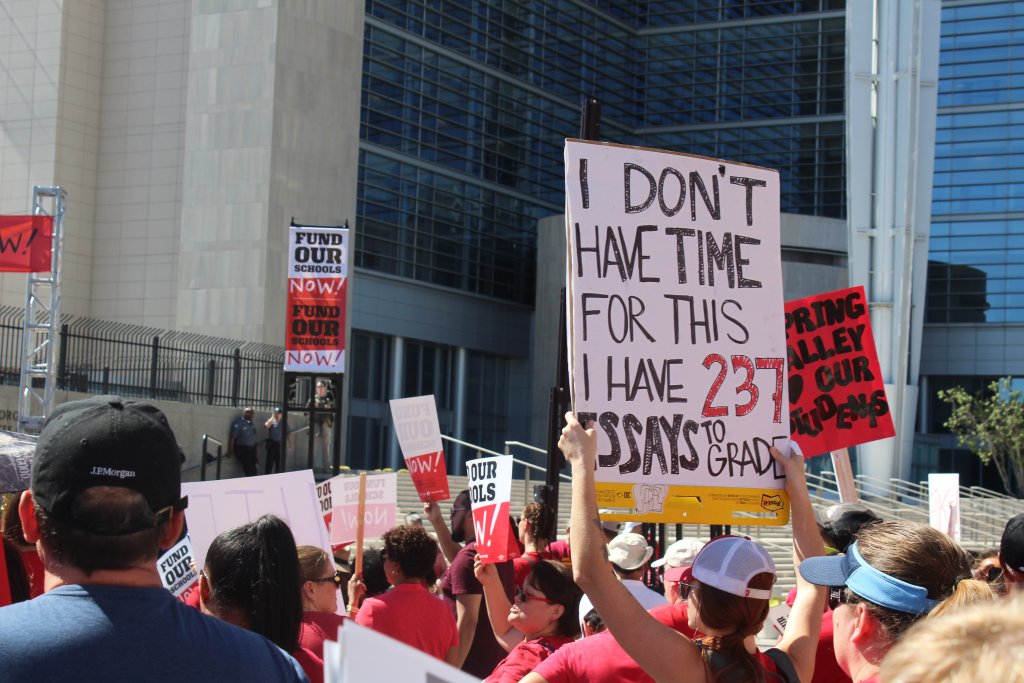 On Saturday, CCEA held a “Fund Our Schools Now” rally in downtown Las Vegas. Several signs referencing or calling for a strike were noticeable among the crowd, which was estimated by the union at 4,000 people over the course of four hours. While several legislators spoke or attended, no School Board trustees were present at the rally. Board President Lola Books told The Nevada Independent legal counsel had advised the trustees not to attend because their presence could be interpreted as implied support of a strike.

Nevada teachers are barred from striking by state law. If a strike were to occur, CCSD could take the matter to court and ask for an enjoinment. The court could fine CCEA up to $50,000 per day for violating an order to enjoin a strike and call for the dismissal or suspension of teachers who participate in said strike.

Anti-strike laws have not stopped teachers in other states from striking.

Teacher are barred from striking in West Virginia but they did it anyway — once last year and again this year. Those efforts resulted in a 5 percent raise for teachers and service workers and killed a proposed bill that would have tied  raises to charter school funding, respectively. The West Virginia teachers strike is credited with kicking off a wave of strikes across the nation.

Since that initial West Virginia strike, teachers have gone on strike in Oklahoma, Arizona, California and Colorado. Other states have seen large protests, including walkouts and “sick-outs” that could legally be interpreted as strikes.