Remember when Sisolak & the Dems promised to tax the poor?

Remember when Steve Sisolak was running for governor and he promised if voters elected him then in his very first legislative session he would pass the buck to county commissioners so they could raise taxes and teachers could get a raise?

Maybe that’s not exactly (or remotely) what Sisolak promised.

But it is what he and Democrats who control the Legislature are trying to do.

Speaking to the press the other day, Sisolak bristled at the suggestion that he’d promised teachers a raise without having enough money in the budget to cover it.

“We funded the budgets fully,” Sisolak said. The problem, he added, is school districts then revised their projections and said they didn’t have as much money as originally thought, effectively moving the goalposts on Sisolak’s well-laid plans.

But as the Bush administration and its apologists used to always say, “now is not the time for pointing fingers.”

Nevada needs to raise taxes, and not just for education. From public transit to affordable housing to child care to elder care to student debt relief to a tattered safety net to higher education (which Democrats weirdly want to cut), several priorities, or what should be priorities, are underfunded and unaddressed. Sacrilegious though it may be, one could argue that K-12 gets too much attention at the expense of other needs that are equally or even more important.

But education is The Big Thing Sisolak promised to be “for” on the campaign trail. Education is the charismatic megafawn of Nevada public policy priorities. Honoring Sisolak’s promise to give teachers a raise is the item on the table, and now, at this juncture (to borrow a phrase from another Bush administration) the one for which taxes will be raised.

Why does it have to be sales taxes?

The sales tax is already the largest source of revenue for the state general fund, and effectively the second-largest revenue source for Clark County. Sales taxes are notoriously regressive, because they make low-income people pay a larger portion of their incomes in taxes than those who are wealthier.

Thanks to its over-dependence on sales taxes, Nevada already “has the fifth most unfair state and local tax system in the country,” according to the Institute on Taxation and Economic Policy’s 2018 edition of “Who Pays? A Distributional Analysis of the Tax Systems in All 50 States.”

One result of that unfair tax system is this ITEP chart: 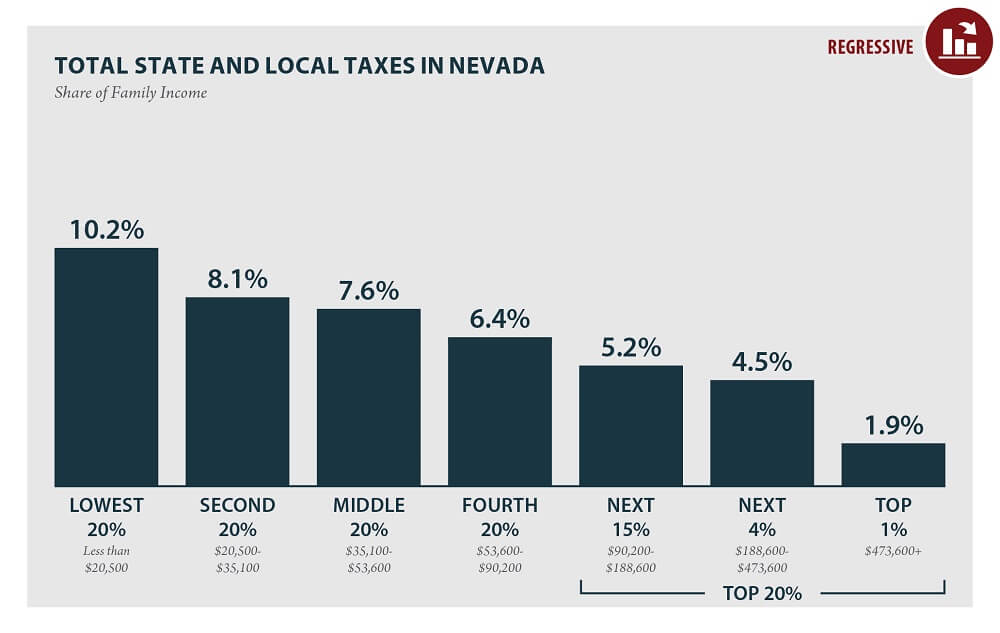 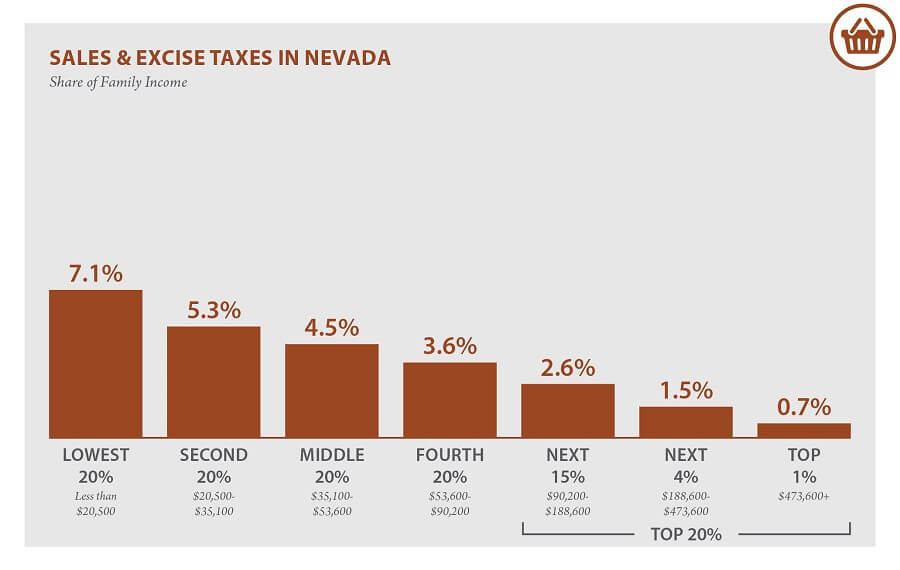 Well, that and the fact this ITEP chart looks like this: 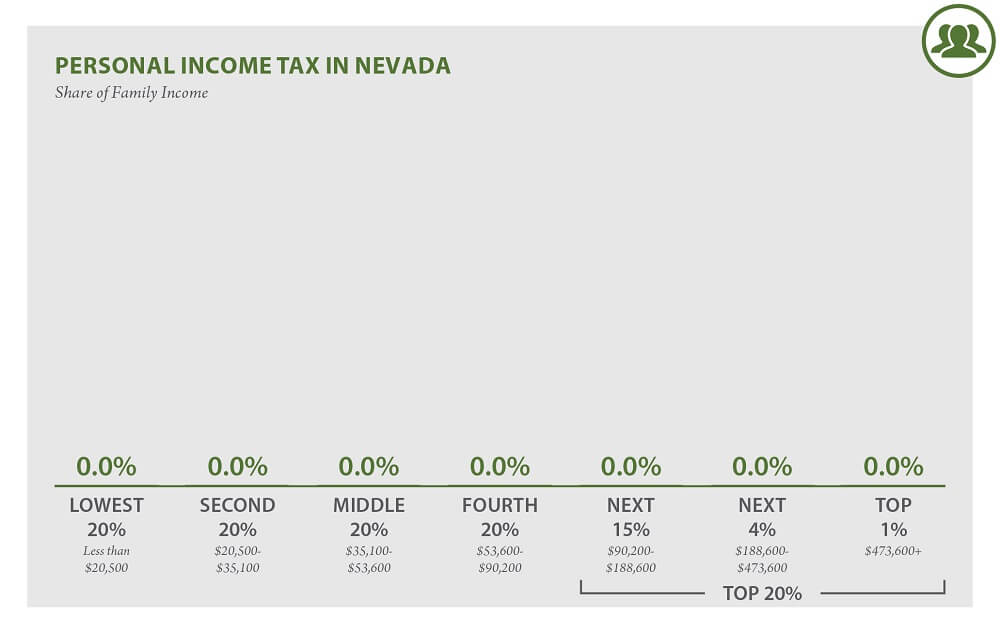 “High reliance” on sales taxes is only the second item on ITEP’s list of features that make Nevada’s tax structure so unfair to low-income Nevadans. “No personal income tax” is at the top of the list. (On a somewhat related note, “We don’t have an income tax” is also the state’s motto.)

Far more important than the charts, however, is the fact that a regressive tax system makes life harder than it needs to be for people who already have enough problems making ends meet working in Nevada’s precarious low-wage service sector jobs.

How touching, then, to see the Clark County and state teachers’ unions, usually at each other’s throats, marching arm-in-arm when it comes to support for a regressive tax that hits the working poor the hardest.

This is not the first time that the Clark County Education Association in particular, under the leadership of John Vellardita, has indicated an eagerness to benefit while dumping on its member’s former students who now make up Nevada’s working class. During the 2017 legislative session, CCEA ran an online ad chiding legislators for debating the minimum wage instead of the (to CCEA) much more transcendent issue of education funding.

Workers of the world, unite! Unless of course one group of workers sees a way to get what it wants at the expense of other workers.

Speaking of CCEA, ever since Sisolak and Assembly Speaker Jason Frierson announced that they would be boldly passing the buck to the county to raise taxes to pay teachers, the union has all but taken credit for forcing the issue, not least because the union got teachers to vote to authorize a strike if the Legislature didn’t come up with more money.

That strike vote was some strong strategy. Most impressive. No, sincerely.

But if the union’s bold tactics were as powerful and effective as the union would like everyone (especially its members) to believe, here’s a question:

Why the sales tax?

Why did all the movers and shakers and policy-makers opt for making an unfair system even more unfair?

Legislators could have authorized the county to raise any number of other taxes — taxes that don’t disproportionately hit the working poor.

For instance, in 2016, the state authorized (ordered, actually) the Clark County Commission to increase the room tax so as to come up with $750 million for … hmm… what was it? … oh right. A football field.

Well, maybe it wouldn’t be fair to go back to the room tax so soon (though the public seems to like the idea).

But the Legislature can give the county permission to raise all sorts of other taxes, such as the cigarette tax, or the liquor tax…

Or the gambling, er, gaming tax.

In contrast to Nevada’s over-reliance on sales taxes, the state’s gaming tax is the lowest in the nation. That suggests if there’s one revenue stream with some capacity for growth around here, it’s the gaming tax — enough growth, in fact, to give teachers a raise and spend some money on other nice things too.

Who knows? If the gaming tax was raised sufficiently, not only would there be more money for Nevada’s underfunded public systems, institutions and services, but maybe the horrible no good very bad sales tax could be reduced.

Ha just kidding. Blue wave notwithstanding, your Nevada Legislature is still a wholly owned subsidiary of the resort industry. (Which just goes to show that if the working poor want to make the Legislature stop taxing them all the time all they need to do is make millions of dollars of campaign contributions year after year after year, hire the best lobbyists money can buy — former legislators will do in a pinch — and maybe be ready to make sure some particularly big-shot former elected officials land in super sweet jobs. It’s not rocket science. Jeesh.)

So sales tax it is. Because Nevada.

But since the governor and the Legislature are evidently in a mood to grant new authority to local governments, perhaps they’d at least consider allowing the county to raise the minimum wage above and beyond the “inadequate” legislation proposed in Carson City. It is, after all, “long past time” that the wage be $15. Especially if Clark County’s working class, and not the resort industry, is going to be saddled with paying for Sisolak’s promises.

Remember when Sisolak & the Dems promised to tax the poor?