That’s the question circling the charter school community in the aftermath of the passage of an education funding bill that provides additional money to all of the state’s public school districts but not the schools overseen by the State Public Charter School Authority.

Senate Bill 551 has been controversial from its inception because it extends indefinitely a payroll tax modification that was previously scheduled to sunset. Nevada Republicans argue it qualifies as a tax increase, meaning its approval should have required a two-thirds majority vote by the Legislature. Nevada Democrats, with the backing of the Legislative Counsel Bureau’s legal team, argue it does not qualify as a tax increase and the bill’s 11th-hour passage along party lines was enough.

Legal action has been threatened (and urged).

That controversy, which included a failed attempt by Democrats to woo one Republican senator into breaking party lines, dominated opposition testimony during the bill’s hearings and has continued to command attention since the session’s end. But during one late-night hearing held a mere two hours before the legislative session deadline, Sarah Adler of the Charter School Association of Nevada (CSAN) raised a separate issue: the bill’s exclusion of the State Charter Authority.

The State Charter Authority approves and oversees the vast majority of the state’s charter schools, which are considered public because they receive taxpayer dollars but are typically operated by private management companies. The authority is not considered a school district, but if it were it would be the state’s third largest with a total enrollment of more than 45,000. That number is expected to grow to 60,000 by next year.

“Of the $35 million for the first biennium, about $2.87 million should be attributed to charter schools educating students in Washoe and Clark counties alone,” said Adler. “They have diverse needs. They have teachers, support staff.”

“I’m sure it won’t be amended,” added Adler, acknowledging the limited time before the session would end that night, “but I felt we needed to be on the record.”

Legislative staff clarified later to lawmakers that charter schools sponsored by individual school districts (of which Nevada has a handful) could receive money through their district’s allocation but that charters sponsored by Charter Authority were indeed not included.

No more was said about the subject.

In her closing statements during the final committee hearing for the bill, sponsor Sen. Nicole Cannizzaro said, “Certainly we are making the choice toward education.”

It was unclear then whether she meant that as a reference to why authority-sponsored charter schools were excluded from her bill, or whether she was referring to the overall decision to allocate payroll tax money to public education.

It is still unclear today.

Both Cannizzaro and the Senate Democrats have failed to respond or even acknowledge phone calls and emails from the Current asking whether the exclusion of the Charter School Authority was intentional or an oversight.

Pat Hickey, the executive director of the CSAN and a former state assemblyman himself, said he is willing to give the Legislature the benefit of the doubt. He said he knows lawmakers were rushing to get the bill through on the last day of the session.

When it comes to education legislation, accidental exclusion of the Charter School Authority isn’t unprecedented, says Hickey. Often it comes down to bill drafters defaulting to using language that refers to districts and forgetting district-less charters.

“If it was simply an oversight, we hope in the interim, maybe through the new Education Funding Commission trying to look at how monies are allocated, we can solve it,” said Hickey. “We would hope so. Because it does seem like there is some inconsistency.”

The Charter School Authority was included in the bill language of AB 309, another education funding bill that passed on the last day of the legislative session. That bill allows counties to raise their sales tax in order to provide additional money to education.

Rebecca Feiden, the executive director of the Charter School Authority, declined to comment on SB 551 and the exclusion of their schools, saying only that the authority believes in equitable funding.

Meanwhile, charter school critics believe the exclusion of the authority from the SB 551 is warranted and consistent with a viewpoint that charter schools should not receive additional money because they have accountability and transparency issues. 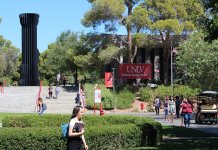