While ten Democratic presidential candidates, some if not most of them largely unfamiliar to voters, vied for breakout moments during the first Democratic debate Wednesday night, it was former Housing and Urban Development Secretary Julian Castro and U.S Sen. Elizabeth Warren who won some of the warmest responses from a group of Las Vegans watching the event.

Some heated moments on stage didn’t phase people in the room, such as an exchange between Gabbard and Ryan on military engagement. However, people hollered when Castro challenged O’Rourke on whether he supported repealing a section of the United States Code that makes it a misdemeanor for immigrants to enter the country without documentation.

While many on stage talked about not separating parents from children at the border and condemned putting children in cages, Castro challenged candidates to answer if they would change the specific section of the law. “I thought Julian (Castro) shut (Beto) O’Rourke down,” said Manuel Ayala. “(Castro) definitely won some support from me.”

Warren received the most applause points from the room during the two-hour debate. The loudest was a two-word response when she was asked if she had a plan to deal with U.S. Sen. Mitch McConnell, who has repeatedly boasted that he will not bring Democratic legislation to the Senate floor for votes.

Her simple, “I do” response drew heavy claps and cheers in the room. She then elaborated by saying in addition to fighting for winning seats in the Senate, the American people must be willing to organize and push Congress to do more.

Even though he came into the night with Warren high on his list, Ayala added he was disappointed when she was asked whether the government should confiscate firearms. Using collectors as an example, Warren said gun ownership is not “an across the board problem” that lends itself to a solution like confiscation.

“I expected more,” Ayala said. “It seemed like a dodge.”

While some candidates attempted to throw out several zingers for a laugh, Klobachar’s quote, “No one should be conducting foreign policy in their bathrobe at 5 a.m.”  was the only one that landed with a chuckle among many in the room.

Ayala, along with many in the crowd, groaned when de Blasio mentioned raising a black son in America. “It was the equivalent of saying I have a black friend of a gay friend,” he said.

Ayala also felt candidates struggled to understand the difference between engaging communities versus pandering. When Booker and O’Rourke answered some questions in English and Spanish, “I thought it was pandering,” he said. “It was like they were trying to one-up each other.”

Isabel Klein, however, appreciated the candidates speaking Spanish. “It shows they know we (the Latino community) are here,” she said.

Most of the audience didn’t respond to candidates speaking Spanish until Castro, the only Latino candidate on stage and running for president, used one Spanish word. “On Jan. 21, 2021, we’ll tell Donald Trump ‘adios,’ ” he said garnering some of the night’s biggest applause in the room.

Jonathan Carrilla hoped to get insight on for two issues — climate change and immigration reform. When asked about the biggest threat to the United States, O’Rourke was the first candidate to mention what many were waiting for: climate change. “There it is,” someone shouted from the crowd.

Klein said one of her top priorities was overlooked. “They didn’t talk about housing at all,” she said. “That’s important.”

The second round of candidates will debate Thursday night. 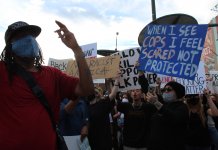