‘We have a voice’: Nevada restores voting rights of ex-prisoners

Like many other formerly incarcerated people, Jovan Jackson could only sit and watch as politicians campaigned on hazardous policies that affected him.

It wasn’t by choice. It was by design.

The process in Nevada for people to restore their rights after leaving prison was overly complicated, left many confused and varied depending on the crime.

That changed Monday when Assembly Bill 431, which automatically restores the right to vote once a person leaves prison, went into effect. Jackson is one of an estimated 77,000 people in the state with the option to register to vote.

Wearing red, white and blue, Jackson wasted no time filling out the one-page voter registration form and becoming the first individual to make use of his newly imbued right.

“Now (formerly incarcerated people) have a voice — a say,” he said. “We can vote against the people who are trying to oppress us.”

He joined lawmakers and criminal justice activists at First African Methodist Episcopal Church in North Las Vegas as they celebrated the implementation of the law.

Though thousands of Nevadans have the right automatically restored, now the question organizers and lawmakers are asking is how do you inform them all?

While other states have passed similar legislation, Emily Zamora, the executive director of Silver State Voices, said there isn’t really a template on how to inform those formerly incarcerated about their rights.

“There isn’t a database of potentially impacted people so now we have to find out who these people are and how to educate them about their rights,” she said. “We are starting from scratch and have a little bit of a learning curve.”

Attorney General Aaron Ford, who spoke Monday about the newly implemented legislation, said he is committed to raising awareness about the law: “Our office is going to be rolling out a robust and rigorous public information campaign to help augment what groups like ACLU, Battle Born Progress and Progressive Leadership Alliance of Nevada (PLAN) are doing in this regard.” 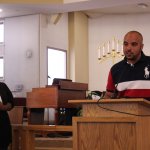 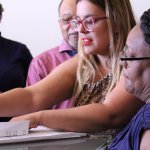 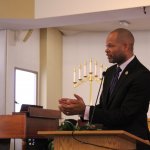 He added the campaign includes videos, public service announcements and on-the-ground outreach as well as working with a coalition of statewide groups that organize and register voters.

Leslie Turner, an organizer with PLAN Action’s mass liberation project, recommended using those who were formerly incarcerated in efforts to register new voters.

“When we talk about registering 77,000 people and putting the word out, we should be hiring those directly impacted by the legislation to canvass and having those impacted work those jobs,” she said.

Nevada, like many other states, has been grappling with how to reform its criminal justice system and how to successfully integrate those leaving prison back into society, which includes giving them resources and incentives not to reoffend.

One component of that was AB 431, which was introduced by Assembly Speaker Jason Frierson as a way to rectify Nevada’s voting restoration process.

According to the Brennan Center for Justice, 16 states and the District of Columbia automatically restore voting rights once a person leaves prison.

Some states have struggled to make changes to their process.

Though activist are glad Nevada is making progress, it took nearly 20 years to get to this point.

[bctt tweet=”“As soon as they’re released, they are granted the right to vote. We don’t have to mess around with the paperwork and all of the entanglements that previously encumbered people and kept them from participating fully.”” username=”@nevadacurrent”]

Former Clark County Commissioner Chris Giunchigliani, who previously served in the Legislature and most recently lost the Democratic gubernatorial race to eventual winner Steve Sisolak, remembered knocking on doors in 2000 to get Southern Nevadans registered to vote.

“I knocked on a family home and got to talking to the wife,” she recalled. “Then the husband stepped out. I asked why he wasn’t registered to vote. He told me he was an ex-felon from New York. I hadn’t even thought about the fact that we didn’t re-enfranchise people.”

Giunchigliani tried to get legislation passed in 2001 and 2003 to automatically restore rights, but all efforts were watered down and created a complicated system.

“It was very difficult to navigate — to the point that our election department created a brochure that we could hand out so people knew what their rights were,” she added.

“As soon as they’re released, they are granted the right to vote,” said Tod Story, executive director of the ACLU of Nevada. “We don’t have to mess around with the paperwork and all of the entanglements that previously encumbered people and kept them from participating fully.”

Passing the legislation has multiple purposes.

For one, Story said the legislation corrects past injustices that disproportionately affect minorities.

Because punitive criminal justice laws have often targeted low-income people and communities of color the most, activists say it has been overwhelmingly black and brown people excluded from the electorate. The Sentencing Project estimates 4 percent of people in Nevada are disenfranchised from voting because of a felony. For African Americans, it is nearly 12 percent.

“Voting is an important part of reintegrating into our community,” said Ford. “It’s also a shared civic responsibility. By restoring ex-offenders’ rights to participate we are able to facilitate a sense of pride in them that makes them less likely to recidivate.”

Ora Watkins, another formerly incarcerated person who registered to vote Monday, said it gives people leaving prison a reason to engage with politics.

“For the longest time, I didn’t follow politics because I knew I couldn’t voice my opinion,” she said. “Most felons feel that way. Now I get a chance to voice my opinions. It gives me hope.”

While they see the law as a major victory, criminal justice reform activists plan to keep fighting to restore other rights and make sure communities affected by criminal justice laws are being listened to year round.

“Not just during election season,” Turner said. “Not just to get them to vote or to register to vote. We need to be invested in making sure we’re doing the day-to-day work and helping folks impacted by the criminal justice system and making sure they are included in conversations about policies that impact us.”

In the meantime, Jackson is already excited to exercise his right to vote.

“Not just for president,” he said. “In local elections, too. It’s those elections that we got people in office who made this law possible.”

‘We have a voice’: Nevada restores voting rights of ex-prisoners