This story was originally published by Stateline, an initiative of The Pew Charitable Trusts.

After a wet spring, Western states are experiencing a massive bloom of cheatgrass, a yellowish, knee-high and highly flammable grass that carpets rangelands across 13 states. In Nevada, samples show up to 3,000 pounds of the invasive plant growing per acre, according to the Bureau of Land Management.

The profusion of the weed could fuel major wildfires this summer. “The people I talk with think it’s more likely to be a rangeland fire year than a forest fire year,” said Mark Brunson, an environment and society professor at Utah State University.

Some state and federal leaders want to do more to fight cheatgrass and are drawing up action plans. But beating back the plant requires coordination between different agencies and levels of government, sustained commitment and funding.

And it can be hard to muster political will to spend money on addressing an invasive species that typically fuels wildfires in remote areas, far from major towns and cities.

“We have an uphill battle trying to get the attention of the public,” said Ken Mayer, a former director of the Nevada Department of Wildlife who’s working on an invasive species action plan on behalf of the Western Association of Fish and Wildlife Agencies.

While rangeland fires tend not to threaten homes the way forest fires do, they affect agriculture, watersheds and air quality, and could threaten more communities as more people move out West. Like all kinds of wildfire, they’re becoming bigger and more frequent partly because of climate change.

In northern Nevada, last year’s Martin Fire — which may have been sparked by Fourth of July fireworks — sped through cheatgrass to consume over 435,000 acres. Ranchers lost cattle, precious sage-grouse habitat burned, and the fire created a smoke plume visible from space.

Experts say there’s a clear link between cheatgrass, which covers more than 100 million acres across the West, and rangeland megafires. “I’m convinced that if we committed the resources to fighting and addressing the invasive issue, we would see a lessening in the size [of fires],” Mayer said.

Cheatgrass is an annual plant that shoots up in the spring and dries to a dusty tan color in the summer. In a dry year, cheatgrass might grow an inch. In a wet year, like this one, it might grow knee-high.

The Western Governors’ Association is forming a cheatgrass working group and has agreed to address the issue with the U.S. Department of Agriculture. Mayer’s fish and wildlife group has been rallying state agency associations and nonprofits to support an invasive species action plan they will present to members of Congress and federal officials this fall.

There are steps that can be taken to reduce the cheatgrass threat, Mayer said. “That’s not the limiting factor at this point,” he said. The problem is “a commitment, policy and funding-wise, from the highest levels of federal and state government.”

From Sage Brush to Savannah

Cheatgrass, native to Eurasia, appeared in North America in the 19th century and has been spreading ever since. It’s been spotted in all 50 states, from sidewalk cracks in Chicago and front yards in Denver to remote shrub lands in Utah. In Nevada, the climate is so cheatgrass-friendly that the weed now covers millions of acres that once were dotted with native grasses, flowers and shrubs.

Cheatgrass starts growing in early spring, sucking nutrients out of the soil that native species such as sagebrush, rabbitbrush and bluebunch wheatgrass need. Eventually the weed can cover the landscape like an unbroken sea.

“Once you have it, it’s very, very hard for anything else to grow. So you get this monoculture,” said Elizabeth Leger, a professor and plant biologist at the University of Nevada, Reno. When cheatgrass dries out in the summer, she said, “it just becomes this unbelievably flammable, super-connected, fine fuel.”

After a wildfire, cheatgrass will regrow faster than native species. If fire torches the same area several times in a few years, it becomes all but impossible for native grasses and shrubs to recover, Leger said. “It’s really depressing.”

The cheatgrass infestation is so vast that it’s hard to address in a cost-effective way, Leger said. But experts say ecologists can try to prevent the weed’s spread and remove it from key areas to make ecosystems healthier.

Since the Martin Fire, the Nevada Department of Wildlife and the Bureau of Land Management, known as BLM, have been trying to prevent cheatgrass from re-growing by applying herbicides and planting native seeds — by hand, tractor and crop duster plane — to the scarred landscape. BLM also has been mowing along the side of roads to create fire breaks.

Paul Petersen, the BLM Nevada state fire management officer, said his office has requested $31.4 million to spend on rehabilitating the area over a five-year period. The Nevada Department of Wildlife spent about $3 million on restoration efforts in wildfire areas last year, said Lee Turner, a habitat restoration ecologist for the agency.

“There’s not enough money to seed every acre in the Martin Fire,” Turner said. “We have to be really selective, and we have to prioritize.”

The state legislature has allocated some additional funds to address rangeland fire. A new Nevada law will provide $5 million for long-term planning, to be spent if the state can get matching funds from the federal government or other sources. A lot of the planning would focus on cheatgrass, said Assemblywoman Heidi Swank, the Democrat who sponsored the legislation.

Funding isn’t the only limiting factor, Turner said. There aren’t enough tractors available for re-seeding, or enough native seeds sold in Nevada for ecologists to plant. Turner’s team is working with federal agency officials and the nonprofit advocacy group Nature Conservancy to encourage local farmers to raise native plants as they would any other crop.

Many ranchers say the federal government should let livestock handle the cheatgrass. Cows, sheep and goats will eat cheatgrass in the spring, when it’s fresh and green, though they avoid it later in the year.

Nevada’s capital, Carson City, has used sheep to reduce cheatgrass around the city since 2006. Every spring, some 1,700 to 1,800 ewes and lambs are trucked to land west of town from a ranch in the area, where they munch for up to six weeks.

There haven’t been any big fires in the grazing area since the program started, said Lyndsey Boyer, a senior natural resource specialist in the Carson City Parks, Recreation and Open Space Department. In recent years, the program has cost the city nothing.

On BLM land, ranchers are locked into grazing permits that can restrict their ability to move livestock around to eat cheatgrass, said Hanes Holman, general manager for Elko Land and Livestock, a subsidiary of Newmont USA Ltd, a mining company.

“As a cow man looking at it, cheatgrass has got its place, it is a usable forage,” he said. But, he added, the weed also needs to be controlled.

In Nevada, BLM doesn’t include cheatgrass in its forage calculations because the weed can grow in such different quantities from year to year, said Nevada state Sen. Ira Hansen, a Republican whose district includes the Martin Fire burn area.

Hansen authored a Senate resolution this session that called on BLM to include cheatgrass in its calculations. The resolution didn’t pass the legislature.

BLM does allow some short-term, targeted grazing to address cheatgrass buildup, the agency’s Petersen said. Separately, 11 permit holders, including Elko Land and Livestock, began a BLM pilot project in 2018 that will allow ranchers to adjust grazing in response to changing conditions.

It’s hard to ensure livestock chomp on cheatgrass without harming native grasses, however, said Brian Mealor, assistant professor and extension weed specialist at the University of Wyoming. Ideally, land managers would have livestock graze cheatgrass in early spring, then stop to let perennial grasses sprout. But in wet conditions, cheatgrass can sprout later in the year, too. “It gets pretty complicated pretty quickly,” he said.

Researchers are looking for other solutions, from studying a fungus that kills cheatgrass to developing remote sensing tools that can tell land managers which areas are at risk of a cheatgrass infestation. “There’s a huge number of different kinds of people trying to look at the problem,” said Brunson of Utah State.

Bill Whitacre, a policy adviser for the Western Governors’ Association, said that when his group researched invasive species over the past year he was surprised to find experts were optimistic about defeating cheatgrass. “The tools exist to actually manage the issue,” he said. “It just takes a lot of concerted effort and deliberate coordination.” 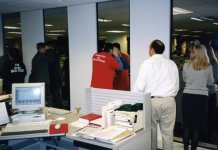 Climate crisis doesn’t get the same urgency Y2K did

So what happened to the VW settlement money, anyway?