A historic joint meeting of the Clark County Commission and the Clark County School District Board Thursday night yielded a wish-list of programs worth pursuing, but no agreement on what to prioritize or whether to fund it.

By law, the money may not be used for ongoing education obligations.

A quarter-cent increase in the sales tax would raise $108 million a year, according to county officials. It would also disproportionately affect low-income Nevadans, who spend a higher percentage of their income on regressive sales taxes.

Nevada has the fifth highest reliance on sales tax of all states, with sales tax comprising more than 39 percent of state and local tax collections in 2016, according to the Tax Foundation.

Among the programs that could be funded by a sales tax hike is a county-run pre-kindergarten program.

“If we’re going to make a difference, we have to start early,” said school board trustee Linda Young.

School board president Lola Brooks suggested non-traditional hours and exploring the potential of partnering with large employers to assist with care for their workers’ children.

“I’d like to have a performance-based system.  I’d like to have it stay in the county,” Kirkpatrick said. “Let’s put it in a transparent pot.  We could see who we’re serving. I want to know their attendance.”

Another possible investment — an effort to reduce truancy.

Commissioners and school board trustees heard from a representative of Boys Town about a program that includes in-home services and has reduced student suspensions by 56 percent in a year.

The price tag for a five-member team assigned to three schools – in the neighborhood of $250,000 a year.

The big-ticket item on the agenda — how to attract and retain teachers at 41 at-risk schools in Southern Nevada.

“We don’t have teachers,” Superintendent Jesus Jara told commissioners and school board members.  “Right now we have permanent subs.”

Jara said a recruitment and retention incentive of $10,000 for 2,800 educators at some 45 schools would make a dent in reducing a ten percent teacher vacancy rate.

Clark County Education Association president John Velardita noted the incentive doesn’t have to be cash, but could be in the form of housing assistance.

“You need a hard commitment from the teacher for three years to stay there,” he said. “It costs $20,000 to replace a teacher.”

“Let’s say we decide to go through with this sales tax increase and give you less than that amount. Would it be your intent to give less to everyone or to give the $10,000 to everyone but at fewer schools?”

Jara said he would choose to give the money to educators at fewer schools.

“Now you’re going to incentivize the greatest needs, where the children need the most support,” he said.

The marathon meeting also included a discussion of the County’s desire to use school facilities for after-hours student-centered events such as Girl Scout meetings.

“We want to use your schools because we pay for them,” Kirkpatrick told school board trustees.  “This is a priority for us on the commission.”

“We spend a lot of money trying to keep those kids busy and those gates are locked,” Commissioner Lawrence Weekly said of the taxpayer investment into county recreation programs.

A school district official noted the district lacks authority to allow public use of 110 schools on BLM property.

“Why don’t we just do it?  What are they doing to do?” asked Commissioner Justin Jones.

“The 321,000 children who are in the community, they are the same kids in our schools,” Jara said, adding he’d recommend the school board allow the community use of school facilities.

“Let’s hold off and see what we can get,” quipped Kirkpatrick. 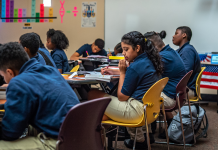 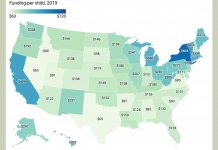 Teachers union warns school board: ‘We will keep our promises’ to...