Public health services: Trying to keep up when your state is 50th in funding

Joe Iser, the chief health officer of the Southern Nevada Health District, goes over accomplishments and priorities at the State of the Health District.

Whether tackling an acute Hepatitis A outbreak and skyrocketing sexually transmitted infections or implementing public campaigns to reduce tobacco use and connect people to vaccinations, it’s the Southern Nevada Health District that has to respond to varying public health issues.

“We do have limited public health resources to do what we do,” he said. “We exist on two legs of a three leg tax system.”

At its State of the Health District last week, Iser along with district officials laid out the previous year’s accomplishments and outlined upcoming priorities and initiatives. Increasing public health funding is on that list.

Nevada ranks 50th among states and the District of Columbia in per capita public health funding with just $7 per person according to the State Health Access Data Assistance Center — Missouri is the worst with $6 per person. The national average is $36 per capita. 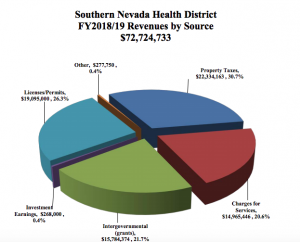 In the last fiscal year, the Southern Nevada Health District’s revenue was more than $72 million — 31 percent comes from property taxes, 26 percent from license fees and permits, 21 percent from grants, 20 percent for charges of service and about 1 percent from investment earnings and miscellaneous sources. However, most of the funding is already earmarked for programming, which doesn’t allow for much flexibility.

During the legislative session, the Assembly Committee on Health and Human Services brought forth Assembly Bill 97, which would have established a public health account and allowed the state to allocate money to local health authorities.

At a hearing in February, the bill was introduced by committee chair Assemblyman Mike Sprinkle, who said it would be up to the Assembly Committee on Ways and Means to determine the specifics of the funding for the bill.

Sprinkle resigned in March. The bill was never heard again.

Iser said the district will push for a similar health fund next session. “This is money we could use for all the initiatives we think we need to do,” he added.

In the last year, the Southern Nevada Health District has had to address crises like Clark County’s first confirmed case of measles since 2015, the first case of acute flaccid myelitis as well as a Hepatitis A outbreak.

According to the district’s Thursday briefing, in the last year it also:

Some of the initiatives the district funded were designed to respond to public health needs and even fill in gaps in area health services.

For instance, the health district opened the Family Health Care Center in October to address the lack of primary care physicians in the community.

The district is trying to qualify as a Federally Qualified Health Care clinic, which could help with funding issues primarily by allowing for better Medicaid reimbursements rates.

Iser said the health district wants to tackle other community-identified concerns such as the opioid crisis and substance abuse in general in Southern Nevada. It can only do so if it gets grant funding.

“We don’t have much funding in this area,” Iser said. “We have applied for a grant from the (Centers for Disease Control and Prevention). We are waiting to hear back. It would help us to better define the opioid epidemic here.”

But grants aren’t always reliable. “The programs at risk are the ones we get grant funding for,” Iser said. “If they go away, we don’t have an easy way to replace those. There is always the opportunity that the federal government, with sequestration or any of a number of reasons, may award a grant for five years but in the third year (the government) tells us abruptly that we don’t have funding. That happened to our teen pregnancy prevention program. Though, at the last minute they reinstated the grant.”

The district, in conjunction with Dignity Health, also conducted a community assessment to collect interviews and data on health concerns of residents.

The survey, Johnson added, also conducted focus groups with LGBTQ community, those experiencing homelessness, and residents who primarily speak Spanish to better understand some of the gaps in services.

The results from the assessment has also prompted the district to look at other health needs.

In the coming year, Iser said that includes focusing on some of the health issues facing Southern Nevada’s aging population. The goals with the healthy aging campaign is to direct funding toward health education among older adults, preventive services and care and reducing health disparities.

“One of the problems that we in public health have is we don’t get a lot of resources for aging,” Iser said.

Public health services: Trying to keep up when your state is 50th in funding