Children of TPS recipients recently shared stories about the fear and anxiety they face if the program is eliminated for their parents.

If Temporary Protected Status ends for certain immigrants, 15-year-old Emily Hernandez, who is a United States citizen, fears she could lose both her parents.

Jorge Ortiz, a 24-year-old recipient of Deferred Action for Childhood Arrivals, said if his dad loses TPS and is deported back to El Salvador, he couldn’t visit — undocumented people who leave the country without documentation risk not being able to return.

Daniela Barahona, a 12-year-old American citizen, worries if her dad is forced to leave the country because they no longer have TPS she and her younger sister would be placed in foster care, possibly even in separate locations.

Over the last few months, a group of Las Vegas youth from mixed-status households — families comprised of different backgrounds that might include U.S. citizens, DACA recipients and TPS holders — have been interviewing their parents and grandparents to find out about how they came to the U.S. None of them would have the lives they currently have without the Temporary Protected Status program, which the Trump Administration has been trying to curtail and in some instances end.

“It hurts more that (my father) could lose his TPS than I could lose my DACA status,” Ortiz said.

Volunteers with TPS Committee of Nevada and Arriba Las Vegas Worker Center encouraged their children to speak out about, and even process, what the possibility of their parents losing TPS means to them.

“I think listening to their stories is a better answer than any definition you’ll hear (about what TPS is),” said Noah Cicero, a volunteer with Arriba who helped the youth craft their stories.

Last week, they gathered at The Writer’s Block in downtown Las Vegas to read their stories, which they hope to eventually publish. More than anything, they just want people to comprehend that without TPS, families could be separated.

What is Temporary Protected Status?

In 2018, President Trump announced he would end TPS for Nicaragua, El Salvador, Haiti and Sudan. The proposal faced litigation, which delayed implementation. On Aug. 14 the lawsuit is expected to have its next hearing. 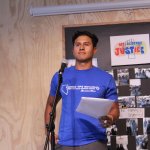 Jorge Ortiz, a 25-year-old DACA recipient, writes about how his dad potentially losing TPS will impact him. 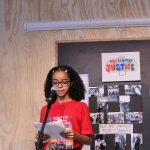 Aaliyah Counts talks about how ending TPS would impact her family. 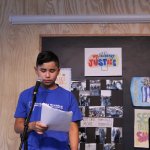 Nery Alas’ father is a TPS holder from El Salvador. He shares his fears about the program potentially ending.

If immigrants with TPS are forced to leave, Garcia said it would hurt the economy — nationwide they pay an estimated $4.6 billion in federal, state and local taxes each year.

As for the children, their families have been in Southern Nevada for years, if not decades, getting jobs, purchasing homes and establishing their lives.

Trump’s decision to cancel TPS has become a ticking time bomb for them. When and if it detonates, the blast could very well destroy mixed-status families and cause children, many who are U.S born, to carry the shards of shrapnel.

“Even if people think they know the story of TPS holders, they don’t know what the kids are going through,” Garcia said.

But writing about what TPS, she said, isn’t about evoking sympathy. “It’s about showing people what we’re fighting for,” Garcia added.

Nine readers in total grappled with their own futures during the reading. Not an easy task for many people let alone children — the youngest being 8 years old — to try to figure out why their parents might be forced to leave

“People who look different from my family are not being separated,” Delmy said as her voice began to shake and she struggled to hold back tears. “It’s not fair that people from different places or different cultures are being treated differently.”

She wasn’t the only one to fight the urge to cry when realizing the weight of the words. Sentences like “if my father is forced to leave” or “I don’t know where I’ll go” aren’t easy to comprehend.

That’s all the more reason why they want people to know their stories.

While facing their own fears, anxiety and confusion, they also found purpose and determination. “It was an easy decision to share my story,” Ortiz said. “If I can do anything that will help my status, my family and my father’s status, I will.”

Even if he and his father do find a pathway to citizenship, he said the last couple years has inspired him to want to keep fighting for others.

Learning about their parents’ pasts has also given many children a better understanding of their family. “It was crazy to learn that my mom had to cross through a river to get (to the United States,” Emily said.

Her father, she added, came to the U.S. on a one-month visa in the early 90s, but when it was time to go back to El Salvador he chose to stay to escape escalating violence.

“My parents have been living in the U.S. for more than 15 years, have a family and pay taxes,” she said. “They have their whole lives here. That could all change with the termination of TPS.”

How the child tax credit became a lifeline for Nevadans: 'It… by Michael Lyle December 27, 2021
Divided Congress holding back pathway to citizenship for… by Jeniffer Solis December 10, 2021
Does Clark County have the authority, desire to pursue rent… by Michael Lyle March 24, 2022