On a rather muggy July morning, 21-year-old Omar Arellano Cruz and his 16-year-old sister Kimberly are in a time crunch to pack up all their possessions, clear out of the home and relocate to a new place.

While Omar calculates finances and reads through page after page of an application to a potential apartment, Kimberly, along with a handful of volunteers from the Latino outreach nonprofit Mi Familia Vota, stuff belongings into boxes and pile the contents of their home into a U-Haul.

As much as evictions are never planned, Omar, Kimberly and their youngest brother, 12-year-old AJ, weren’t prepared for the shock and financial constraints that comes from suddenly forced to move.

Their mother Adriana Arellano Cruz, was detained by U.S. Immigration and Customs Enforcement on July 10 and still remains at its detention facility in Henderson. The children, all U.S. citizens, have been forced to deal with the aftermath.

“You never expect to be in this situation until it happens,” Omar said. “You go from minding your business to ICE picking up your mom and your whole life is destroyed.”

His heavy-handed temperament toward immigrants, activists have noted, has resulted in ICE enforcement being much harsher.

Cecia Alvarado, the Nevada state director for Mi Familia Vota, said the policies, in particular detention policies, are taking a toll on people. “The other side of this is what’s happening to American families,” she said. “No one is talking about them.”

In the past month alone, Alvarado has heard numerous stories of parents being detained and families being separated, which has upended lives. However, it’s the Cruz’s story, she said, that has been the most problematic.

Adriana Arellano Cruz was pulled over by the police in 2011 for an outstanding warrant for unpaid traffic violations — Nevada is one of a few states that hasn’t decriminalized traffic tickets.

After being detained at an ICE detention center in Henderson, she was released. But according to ICE officials, the Board of Immigration Appeals affirmed her final order of removal in 2017.

Her children said that Cruz previously fought her removal with another attorney and wasn’t aware of a deportation order when she was picked up in July.

On July 15, the same day the Cruz children and their current attorney, Dee Sull, held a press conference, the U.S. Court of Appeals for the Ninth Circuit granted a stay of removal and temporarily halted the deportation.

Yet Cruz still hasn’t been released from the detention center and her children are left to pick up the pieces. 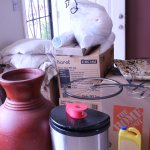 The Cruz family packs up all their belongings preparing to move. 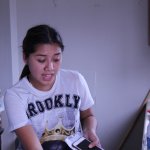 Kimberly Cruz packs up the contents of her home as she prepares to move. Following her mother’s detainment by ICE, her family was evicted. 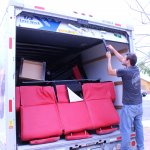 An estimated five million children in the United States live with at least one immigrant parent who lacks documentation. Last week, U.S. Sen. Catherine Cortez Masto and U.S. Sen. Tina Smith, D-Minn, introduced the Coordinating Care for Children Affected by Immigration Enforcement Act to ensure they have some protections if their parent is detained or deported.

The bill would allow parents who are detained by ICE to arrange care for their children, attend family court proceedings and coordinate their potential departures. “This legislation would ensure children are safe, and it protects parents’ right to decide about their children’s future,” Cortez Masto said in a statement.

Right now, ICE doesn’t have a singular policy for dealing with children when a parent is detained and instances are handled on a case-by-case scenario.

Other than their mother, the Cruz siblings didn’t have any immediate family in Southern Nevada. Following Adriana’s detainment, the family had to scramble to figure out where to live and what would happen with the younger children.

Since Omar Cruz was 21, he was able to obtain power of attorney for his two younger siblings. However, it was Mi Familia Vota who worked with an attorney to arrange that, not ICE.

Alvarado added that since they have an aunt who lives in San Diego, the family debated sending the 12-year-old to live with her. However, the family had already been traumatized and didn’t want to be further separated.

Eviction was also on the horizon.

In the three years they lived at their former residence, Omar Cruz said his mom always paid the rent on time. It was only in the last month, he said, she asked their landlord if she could make a split payment. 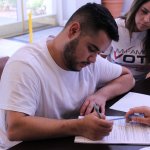 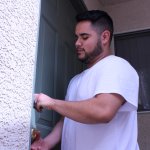 Omar Cruz is shown unlocking the door to his new apartment. After his mother was detained by ICE, he and his younger siblings were forced to find a new place to live. 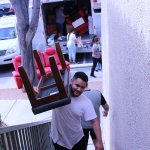 Omar Cruz moves into his new place. Following his mother’s detainment by ICE, the family was evicted.

She was picked up by ICE on the way to the bank, so was unable to deposit the money in order to pay the remaining balance. Even though he was aware of the mother’s detainment, Cruz said the landlord proceeded with the eviction process after not receiving the payment.

Co-workers and friends offered a place to stay, but Omar Cruz said the siblings preferred to find a more stable option since it was three of them.

Though they were given notice around the same time their mother was detained, the family didn’t realize how quickly an eviction could transpire. It caught them by surprise when the constable showed up to ask them to leave the property. “The younger sibling (AJ) started crying because he thought it was ICE,” Alvarado said.

They spent the night in a hotel and the next morning were allowed to return to collect their belongings. Alvarado, along with volunteers, helped the family figure out finances, clear out their possessions and settle into a new, two-bedroom apartment.

It’s a bittersweet moment for Omar Cruz to sign the lease on his first apartment. “I just wish my mom was here so she could see this.” he said.

None of what they did, he said, would have been possible without community support. “The moving process is way more expensive than I ever realized,” he added.

Community groups started a GoFundMe and raised more than $3,500. “I think without donations from the community, we would have been homeless,” Omar said.

While the Cruz siblings are settling into their new apartment, they still face a lot of uncertainty.

Even though both Omar and Kimberly, who is starting her junior year in high school, work at restaurants — one is a server and the other is a host — Omar still fears it won’t be enough.

“I work 40 hours a week and my job is really understanding,” he said. “One of my fears is that we will go homeless and not have a place to stay. Even though my sister and I both have jobs, you never know.”