That wasn’t enough for Trump to win the state.

Given the hardening of the Republican base in support of a leader it now loves more than Reagan, Trump will presumably win the rurals in a landslide again next year.

And given the disgust with Trump among, well, just about everyone else, he will will presumably lose the state next year, along with the national popular vote. Again.

He may lose the electoral college vote, too.

“Our greatest export is our youth” has been the lament of much of the rural U.S. for decades. In Nevada, of the 13 counties categorized as either “micropolitan” (having a town of at least 10,000 people but a county population less than 50,000), or rural, eight of them still had less employment in 2017 than they had in 2007 before the economic crash. Little has happened to reverse that rural decline in the last two years.

Even mining, the crown jewel of rural Nevada employment, has seen jobs decline slowly but steadily for years, thanks in no small part to automation. (“We’ve pretty much got a fully automated mine in sections,” the CEO of Barrick bragged to shareholders Monday while discussing the giant alliance between Barrick and Newmont formed earlier this year.) 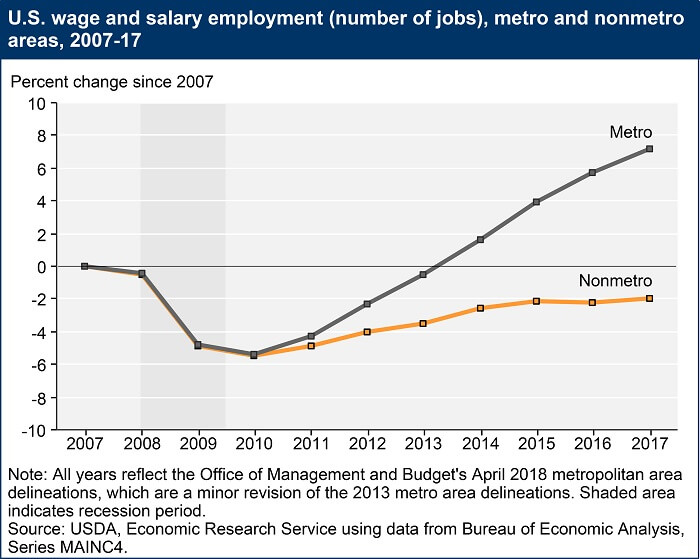 Trump’s policies for the rural West, inasmuch as he has any, are tax cuts for and lax regulation of extractive, agricultural and development industries, accompanied by talk radio-ready government-is-icky clichés. In other words, the same policies rural Republicans — and the rural voters who love them — have been demanding for, oh, about 100 years.

Meanwhile, the Democratic economic agenda for the rural West, at least for the last couple decades, has consisted mostly of chanting “workforce development” (don’t get me started), and pushing tourism.

Tourism is a big industry. But at the risk of offending conservationists and tourism/recreation entrepreneurs everywhere, let’s be frank: Just because someplace is lightly populated does not automatically render it attractive to tourists.

Which brings us to … Infrastructure Week!

No, not really. The only thing more vast than some of Nevada’s landscapes is the nothingness that is Trump’s policy for the rural U.S.

But you know who does have some thoughts about rural development? Democrats. That’s who.

For instance, Nevada Democratic Sens. Catherine Cortez Masto and Jacky Rosen are both co-sponsors of legislation to map broadband access in rural areas and create a process by which towns and tribes can maybe make the FCC order private service providers to step up.

But another Democrat, Sen. Elizabeth Warren, has a plan (imagine that) for rural development. More accurately, she has a plan to tailor all her other plans — health care, child care, housing, student debt, etc. — so that they address specifically rural problems.

Oh, and as for broadband, she proposes spending $85 billion on grants that cities, counties and tribes can use to set up public internet access. The private internet service providers — who have failed so much of rural America even though the nation awarded them all that broadband spectrum for a nickel-ninety-eight — are unlikely to get their greedy mitts on the grant money, even indirectly.

Other Democratic presidential campaigns also seem convinced that rural voters are an opportunity, not a barrier — and not just in traditional Iowa caucus campaign ethanol worship ceremonies, but in the general election.

Trump’s tariffs are strangling rural agricultural incomes in the Midwest, but also inflicting damage on Nevada farmers and ranchers. His ongoing attempts to gut the Affordable Care Act have put more strain on an already woefully inadequate rural health care delivery system. Trump is fond of attacking social safety net programs, because he thinks it’s good politics to punish “the other,” especially people of color who are not his base. And so he recently announced a punitive plan to toss people from the Supplemental Nutrition Assistance Program, even though rural people are just as likely to be on SNAP as urban people. His tax cuts have enriched billionaires and CEOs. Alas, there are relatively few billionaires or CEOs in Esmeralda County.

And of course Trump deliberately and relentlessly, in antithesis to his job title as president of the United States, stokes fears and hatred to divide rural and urban Americans.

Maybe rural people are getting sick of that? Same as urban people?

With the exception of a few pockets, and most of them closer to urban areas, rural depopulation is projected to continue. Inasmuch as there has been population growth needed to spark rural economic development, it has been led by the group Trump and his rural supporters, via vilification, have made their galvanizing issue — immigrants.

“Only I can fix it,” Trump once declared, referring to problems real, imagined or just trumped up to scare people.

The decline of rural Nevada or rural anywhere in the U.S. is unlikely to be fixed anytime soon, by anyone, least of all Trump.

Earlier this year, Iowa State economist David Swenson put it like this:

“As a researcher who has studied rural economies for more than three decades, I urge policymakers to seriously consider the fact that most rural areas will not grow.”

That’s a tough message, because it’s probably true. Which means it’s doubly important — and doubly in their best interest — for rural voters to take a clear-eyed, fact-based look at what policy choices are likely to help them deal with reality.

Most rural voters in the U.S., and certainly most in Nevada, won’t do that.

Instead they’ll stick with a person who routinely violates standards of decency, honesty, integrity and competence that rural people often profess to especially embody.