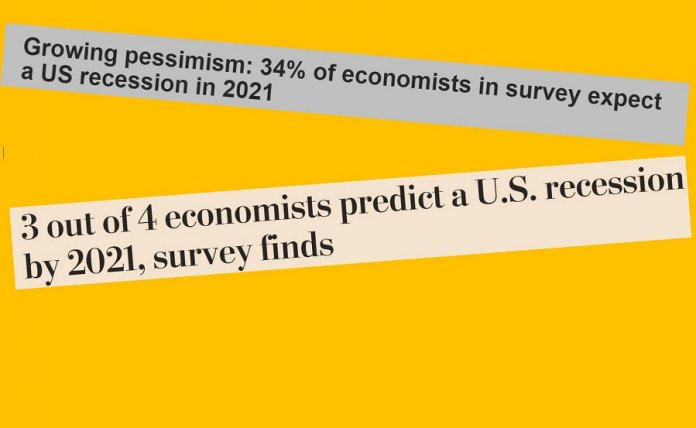 “If all the world’s economists were laid end to end,” George Bernard Shaw is said to have quipped, “they’d never reach a conclusion.”

“Growing pessimism: 34% of economists in survey expect a US recession in 2021.”

On the other hand…

The first headline, from The Associated Press, cites a survey of 226 economists conducted by the National Association of Business Economics.

The second headline, from the Washington Post, is citing a … a survey of 226 economists conducted by the National Association of Business Economics.

And both headlines are … right.

The NABE survey found that 34 percent of respondents think the next recession will start in 2021.

So why did AP go with 34 percent in its headline instead of 74 percent, especially since the latter seems more reflective of the headline’s characterization — “pessimism” — than the former?

Probably because the 34 percent of economists who expect a recession in 2021 is up substantially from the 25 percent who said as much in the last NABE survey just six months ago.

This is not to single out either the Post or AP. Several national news outlets covered the story, some going with the 74 percent headline, others opting for 34 percent. Some news consumers may have been confused.

Other news consumers, however, seized on one headline while ignoring the other, and then mangled the entire story in an attempt to defend Trump and his alleged greatness.

During the first hour of his radio show Monday morning, a customarily exasperated Rush Limbaugh declared that if 34 percent of economists expect a recession in 2021, then it must mean 66 percent don’t, so yay Trump.

The media, Limbaugh further explained, should have emphasized the 66 percent, because that finding just goes to show how wonderful Trump’s economy really and truly is. But the media didn’t do that, Limbaugh added, because the media is made up of icky liberals.

Interpreted very charitably, Limbaugh could be considered almost technically correct, sort of. The other 66 percent of economists surveyed don’t expect a recession in 2021.

Again, that’s because 38 percent of them expect it in 2020, and 2 percent expect it this year. Combined with the 34 percent who expect the recession in 2021, that’s 74 percent of economists who expect a recession by sometime in 2021.

(For the record: The share of economists surveyed who, as Limbaugh suggested, think the economy is soaring splendidly and there will be no recession either in or by 2021 is not 66 percent. It’s 26 percent.)


Meanwhile, the NABE survey also found that more than half of all economists surveyed expect the federal funds interest rate, cut to 2.25 percent last month, won’t be any higher than 2 percent by the end of 2020.

The rate is what banks charge when they loan to each other overnight. But it’s more than that. And if the three out of four economists who think a recession will hit by 2021 are right, it could be a problem.

When the economy crashed more than a decade ago, the Fed rate was north of 5 percent. As policymakers scrambled to stimulate the economy — or at least prevent it from hurtling even more deeply into a downward spiral of misery and despair — the rate was dropped quickly and precipitously.

“After all, in 2007-2009, the Fed and other central banks reacted aggressively to the shocks that triggered the global financial crisis, but they did not avert the ‘Great Recession,'” wrote economist Nouriel Roubini earlier this summer in an essay on the growing risk of recession.

“Dr. Doom,” as Roubini became known when he was perhaps the most prominent voice predicting the crash of 2008, notes that with rates already so low in the U.S. and abroad, combined with numerous other factors ranging from Trump’s trade war to massive corporate debt to rising nationalist populism to the U.S. president’s instability, “the policy toolbox for responding to a crisis remains limited. The monetary and fiscal interventions and private-sector backstops used after the 2008 financial crisis simply cannot be deployed to the same effect today.”

The aforementioned unstable president contends an inverted bond yield curve in which returns on short-term bonds are counter-intuitively higher than on long term bonds — a phenomenon that is a) the predictor of seven of the last seven recessions and b) happening now — well, Trump says that’s a conspiracy.

He — and his acolytes and apologists in Nevada and the nation over — also can’t seem to fathom that the magic tax cuts of 2017 have run their stimulative course, and the short-lived but very costly economic growth accrued as a result of those tax cuts was overwhelmingly distributed to those at the top and very sparingly distributed to everyone else.

Which brings to mind the real problem with economists. They might be slightly divided over when exactly the next recession will hit. But as a profession, for decades, they have been overwhelmingly united in the belief that the Most Important Thing In The History Of Ever is economic growth, while focusing precious little concern for how the benefits of that growth are distributed.

Having absorbed that conventional wisdom, politicians have concluded there is simply nothing that can’t or won’t be fixed by economic growth, and are loathe to even utter the word “distribution,” lest someone (Limbaugh or one of his imitators, perhaps) accuse them of being socialists. Nevada politicians, of both parties, are particularly guilty of this, and have been for decades.

Wealth and income maldistribution is especially pronounced in Nevada, where the overall economy has grown much faster than household incomes. Recessions take the hardest toll on those with the lowest incomes. None of this bodes well for a state where the economic recovery has been precarious at best. 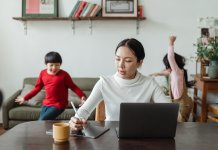