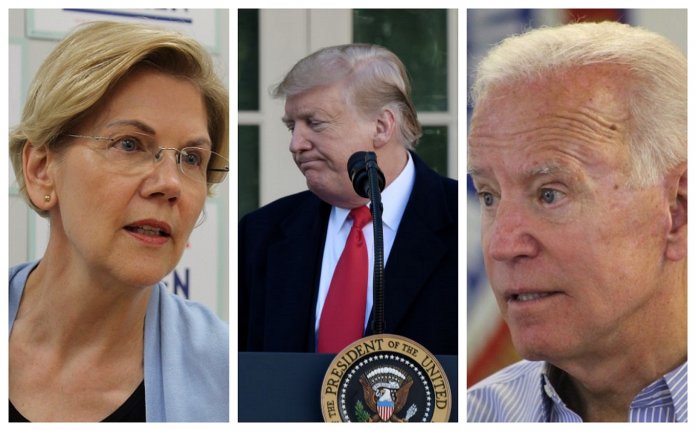 Elizabeth Warren has a plan. Many plans. From affordable child care to enhanced Social Security benefits — from cradle to grave, as it were — she’s got a plan for that.

Joe Biden, Bernie Sanders, Pete Buttigieg and most of the rest of the Democratic presidential candidates have plans, too. Lots of plans.

The current occupant of the White House has … not really plans. They’re more like dastardly impulses. However, while harmful to the nation and its peoples on several levels, perpetual lashing out in malevolence is not really relevant to the matter at hand, which is productive policy that would make Nevada a better place. So this isn’t about him.

Meanwhile, here in Nevada, there are … occasional plans.

Some of them have been good, like background checks on gun sales, or protecting a woman’s right to choose instead of infringing on it.

Some of them have been horrible, like an anti-democratic constitutional restriction allowing no more Republicans than can fit in a minivan to kill any tax hikes and mire the state in penury and despair.

And on some issues and concerns, area political, business and community leaders seem wholly at ease in the knowledge that the state of Nevada is not Elizabeth Warren, and so does not, in point of fact, have a plan for that.

A couple obvious examples: Predatory payday lenders, on whose behalf Nevada lawmakers earlier this year exhibited magnificent cowardice, refusing to even consider a plan; and the state’s affordable housing crisis, for which the Legislature, in its most magnificent flop,  prepared not so much a plan but scattered micro-proposals of the sort someone might craft if someone wanted to be seen as having a plan even though they don’t really have one.

Leading presidential candidates have plans for both those problems. Warren created and designed the Consumer Financial Protection Bureau and knows more about the nefarious practices of the financial services industry than any person who has ever run for president of this or any other country. Just last week, Bernie Sanders released details of a sweeping $2.5 trillion housing policy with the goal of ending homelessness, controlling rent increases nationwide, and dramatically boosting federal financial support for affordable housing.

So maybe that nice Senator Warren or the stalwart Senator Sanders will fix Nevada for us?

Given Official Nevada’s failure to act in a timely and significant manner (public subsidies for football fields and battery factories excepted), work-a-day Nevadans may be forgiven for hoping their problems will be addressed by federal politicians instead of the area variety.

Even in those instances when Nevada does have a plan, it can still leave people hoping for relief from a more substantial, less contrived, federal plan.

For years, working people have been clamoring for a higher minimum wage. Hearing those calls, or hoping to impress those voters (why politicians do things is not terribly important so long they do what is right), all three Democrats in the U.S. House from Nevada are sponsors of legislation to raise the minimum wage to $15 by 2025. So is Nevada’s freshman Democratic senator, Jacky Rosen, who isn’t exactly some wild-eyed radical socialist seeking to overturn the hegemonic narrative preferred by the dominant class.

Every Democrat running for president — every serious one, anyway — has also embraced the $15 wage. As the second decade of the thus far calamitous 21st century nears its end, a $15 minimum wage is the de facto, mainstream position of the Democratic Party in the United States of America.

So after a mighty “blue wave” swept Democrats to power in Nevada in 2018, your Democrats in the state Legislature and the governor’s office naturally got on the stick, leapt into action, and passed a bill to raise the state minimum wage to … $12 by 2024.

As you can imagine, the stunned disapproval of Nevada’s progressive groups was … next to nonexistent. “If it’s $12, we hope that it’s only the beginning and not the end of the fight to raise the minimum wage,” said a spokesperson for the most politically powerful progressive organization in the state, the Culinary union. But don’t worry. When it comes to a $15 wage, the union is 100 percent behind the idea that Congress should do it.

Let’s say a Democrat wins the presidency — not just the popular vote (which Democrats have won all but once this century) but the electoral college too. And let’s additionally say that Harry Reid is right, and a new Democratic Senate majority will kill the filibuster, empowering Democrats to enact sweeping programs to assert global leadership in slashing greenhouse gas emissions, rein in financial industry abuses, create an adequate supply of affordable housing, and provide health care, child care, increased Social Security benefits and many other nice things too.

‘…the larger systemic problem we face’

Last month, while breathing a sigh of relief after a local teachers strike had been averted, Gov. Steve Sisolak took a moment “to recommit to doing whatever we can to fix the larger systemic problem we face,  so we don’t end up back here again in two years.”

Goodness. And to think a mere seven months earlier a beaming Sisolak declared “if it ain’t broke, don’t fix it.”

Some of the non-sales tax ways to raise more money include but are not limited to: raising the gaming tax, eliminating mining tax deductions, raising the marijuana tax, tiering property taxes so the bigger the enterprise the higher the rate, and raising the state’s lilliputian “commerce tax” on businesses. For starters.

But the multifarious neglected problems that make life harder than it needs to be for working Nevadans won’t be reversed without an income tax, or more specifically, two income taxes: personal, and corporate.

Unless and until Nevadans change their state constitution (which like most state constitutions is not some hallowed document reflecting a society’s noblest ideals but a crass undertaking in special interest favoritism) and adopt income taxes, there is zero chance Nevada will, as Sisolak put it, “fix the larger systemic problem we face.”

Lack of an income tax is the larger systemic problem we face.

Maybe there will be a new national beginning after Democrats win All The Things next year and enact sweeping initiatives and reforms. A just as, if not more, likely scenario is any national policy progress, assuming Trump loses and there is some, will be modest, and slow.

Most economists expect that by 2021 — when the Legislature next convenes — the economy will be worse than it was when state lawmakers adjourned earlier this year. If so, there will be very little talk of fixing much of anything in Nevada, and the only plans will be the grubby sort that invariably accompany balancing a chronically underfunded state budget.

A new president won’t “fix the larger systemic problem we face.” Nevada’s going to have to do that itself.