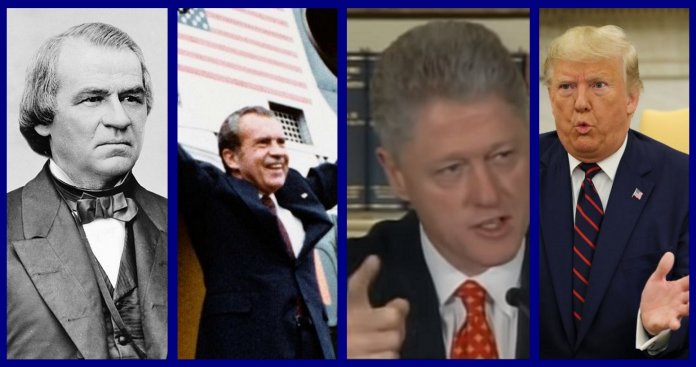 WASHINGTON – Nevada Democrats are getting bolder in their challenges to President Donald Trump, who is now under an impeachment investigation for alleged misdeeds and abuses of power.

Last week, Rep. Dina Titus called for an audit of the Trump International Hotel and demanded documents relating to a federal agency decision that allowed Trump to continue to operate and profit from it while president.

She made the request in a letter to Emily Murphy, administrator of the General Services Administration (GSA), the agency that made the decision in 2017. Titus, who chairs the subcommittee that oversees the agency, held a hearing on the matter last week.

Titus questions whether he violated the Emoluments Clause of the U.S. Constitution, which prohibits presidents from earning money from foreign countries. He’s “essentially accepting bribes from giant corporations looking for sweetheart deals and foreign interests currying favor,” Titus has said.

The matter is not at the center of the impeachment proceedings that are currently underway, but the issue surfaced in the summary of Trump’s phone call with Ukrainian President Volodymyr Zelensky. During the call, Zelensky told Trump that he had stayed in Trump Tower – reportedly marking the first known example of a foreign leader trying to influence Trump by spending money at his properties and telling him about it.

Titus also sits on the House Foreign Affairs Committee, one of six committees House Speaker Nancy Pelosi (D-Calif.) has directed to proceed with what she called “umbrella of impeachment inquiry.”

It is one of three panels that on Thursday questioned Kurt Volker, the Trump administration’s special envoy to Ukraine who resigned last week after being named in the whistleblower complaint alleging that Trump pressured Ukraine’s president to investigate the son of former Vice President Joe Biden for political gain.

“As a member of the Foreign Affairs Committee, I think she’ll have a somewhat unique role” in the impeachment proceedings because she’s “so well versed in international affairs and a strong believer in international diplomacy and foreign aid,” spokesman Kevin Gerson said.

On Thursday, after Trump called on China to investigate the Bidens, Titus criticized him for calling on another foreign government to “falsely smear” a political opponent. “This is an obvious abuse of power and yet another attempt by Donald Trump to undermine our elections,” she said in a statement. “Our democracy is under attack by the president.”

The two other Democrats in Nevada’s delegation – Reps. Steven Horsford and Susie Lee — are also wading more deeply into the impeachment process.

Horsford sits on the House Ways and Means Committee, another of the six committees charged with investigating Trump. That panel is seeking copies of Trump’s tax returns from the Internal Revenue Service, though the focus of impeachment is Trump’s dealings with Ukraine.

And both Horsford and Lee announced their support for an impeachment inquiry last week, writing in a joint statement: “Make no mistake, these recent allegations are certainly dire. They point to a direct abuse of power at the expense of our national security.”

Lee and Horsford – both of whom are viewed as potentially vulnerable in the 2020 elections – are facing pushback for coming out in favor of impeachment.

“Susie Lee and Steven Horsford’s move to baselessly impeach President Trump because they don’t like him will ruin their credibility in these independent districts,” said Torunn Sinclair, spokeswoman for the National Republican Congressional Committee, House Republicans’ campaign arm.

Both are among the 55 Democrats targeted by the NRCC — and both are receiving campaign support from the Democratic Congressional Campaign Committee.

The state’s lone Republican — Rep. Mark Amodei – landed in hot water last week after appearing to back impeachment in an interview with reporters. He parsed his statements soon after, saying he supports an inquiry, but not impeachment.

Reid had a front-row seat

Former Nevada Democratic Sen. Harry Reid, the former majority leader of the U.S. Senate, meanwhile, is becoming more vocal in his support for impeachment proceedings against Trump, which he opposed earlier this year.

Last week, he praised Pelosi for moving forward with an official inquiry. “I think it speaks well of her that she believes enough’s enough, and that she initiated it,” he told reporters before a panel discussion on Islam at the University of Nevada at Las Vegas.

Reid, who was Senate Democratic whip during the impeachment proceedings against President Bill Clinton, initially advised Democrats against impeachment out of fear it would backfire politically.

“The less we talk about impeachment, the better off we are as a country,” he said earlier this year. But he has since changed his tune.

“I sat as one of the leaders during the time of the impeachment, the trial took place in the Senate. With the focus on President Clinton, the American people just simply thought, ‘that’s not something we should be doing,” he said.

In that case, Clinton became more popular, not less, Reid continued. “I don’t see that happening now, because it’s a different type of impeachment proceedings.”

Then, Reid was at the forefront of the national debate over whether to impeach Clinton over charges of perjury and obstruction of justice, and Nevada’s delegation was divided.

The state’s two GOP lawmakers – then-Reps. Jim Gibbons and John Ensign – voted to allow an impeachment inquiry to proceed and then voted to adopt articles of impeachment charging Clinton with perjury and obstruction of justice. Gibbons also voted to charge Clinton with abuse of power, but Ensign didn’t.

Two of the articles passed the House, triggering a trial in the Senate. Reid and Nevada’s other senator, Democrat Richard Bryan, voted not guilty on both counts, and Clinton was acquitted.

The impeachment process was not as partisan in 1974, when President Richard Nixon was threatened with impeachment.

That year, lawmakers were virtually united in opposition to the president, with all but four Republicans voting to allow an official impeachment inquiry. Nevada’s sole representative in Congress at the time, Republican Rep. David Towell, supported the inquiry.

Nixon resigned before the House cast a vote on whether to impeach.

Nevada’s lawmakers were also united during the nation’s only other impeachment — the attempt to remove Democratic President Andrew Johnson from office in 1868, when the state of Nevada was just four years old.

GOP Rep. Delos Ashley supported articles of impeachment brought against Johnson, and both senators – Republicans James Nye and William Stewart – voted to convict him. Johnson narrowly survived the effort by one vote.