Las Vegas Mayor Carolyn Goodman is reviving and revising a pitch made years ago by her husband and then-mayor, Oscar, to turn the prison in Jean, Nevada, 30 miles south of Las Vegas, into a facility to house homeless people. Unlike her husband and predecessor, Mayor Goodman hopes to shelter only homeless people with severe mental health problems at the Jean facility.

“Our two biggest areas that we don’t seem to be getting too much headway is through the alcohol and drug-addicted and then those with severe mental issues, and there’s no place for them,” Goodman said of the city’s homeless population last week on Nevada Public Radio’s State of Nevada. “And though I suggested back nine years ago to Governor Sandoval that we have that wonderful facility in Jean, Nevada, that was set up for women’s issues, and there’s one up in Reno — perfect place for treatment and caring and job training for those who need medication and have severe mental issues.”

The Jean Conservation Camp is currently used to confine female prisoners, according to the Department of Corrections website.

“The governor and the Legislature could move in a special session immediately to retrofit. We’ve had psychologists and psychiatrists, nurses all saying ‘is that ever going to happen? We’d really like to help these people,’” Goodman said on KNPR.

But staffing may be problematic.

Nevada’s state-run mental health facilities have a workforce vacancy rate of 12.4 percent, according to figures obtained from the state.

Southern Nevada Adult Mental Health Services is authorized to employ 28 senior psychiatrists. As of last week, 23 of those positions were vacant.

Of 78 authorized positions for Forensic Specialist 3, the classification of professionals who help determine whether an individual is legally competent, 16 spots are vacant.

In the Northern Nevada Adult Mental Health System, 14 of 46 positions for psychiatric nurses are vacant.

Lakes Crossing, the maximum-security facility in Sparks for patients undergoing competency evaluations and treatment, is authorized to have the full-time equivalent of one-half of a senior physician on staff. The position is vacant, as are 13 of 112 authorized positions overall — a workforce vacancy rate of more than 10 percent.

Nevada ranks 33rd in the nation in terms of mental health workforce, with one provider for every 510 residents, according to a 2019 report from Mental Health America.

Such shortages result in decreased access to care, high burnout rates among professionals and delays for those in need of treatment, according to Mental Health America.

“The hospitals are overburdened with those with mental issues. We see an awful lot of security issues,” Goodman said on KNPR. “We just three weeks ago had one homeless person hammer, bludgeon to death another homeless person.”

“Now this place in Jean for those who are severely mentally affected, we need a place for them. Years ago we had sanitariums. Some of them were fine but now even today only the well-to-do can afford to put their relative or friend or spouse there,” the mayor added.

“And this needs to be federal help. And certainly, our governor and Legislature need to do something,” Goodman said. “We’re having a great deal of difficulty with the fact that our Legislature only meets every other year.  So what are these people supposed to do, sit out there for two years?”

A spokesman for Goodman says the mayor has not discussed her idea with Gov. Steve Sisolak.  Sisolak did not respond to the Current’s request for comment.

“We are a tourist destination and people on vacation don’t want to see somebody sleeping in a sleeping bag on the corner. I get that,” says Robin Reedy, executive director of the National Alliance of Mental Illness of Nevada. “But there are other solutions.”

“I would commend the mayor for at least attempting to provide a solution to a very difficult problem, however, I would much rather like to see the empty buildings all around the cities be purchased by the cities and have people with a disability be able to have access to services,” Reedy says. “They could rent the bottom floors to non-profits, or Social Security disability offices, and convert the top floors to studio apartments.”

“I would suggest it would be far less expensive to find an old hotel or retail outlet to make those changes than to renovate that Jean facility,” says Reedy, who served as Chief of Staff to former Gov. Jim Gibbons and says the remoteness of the Jean prison is a concern.

“Providing a home for people who are suffering a mental health problem is the bottom line to stability,” Reedy said. “If they have a home, they can pay attention to their meds and mental health.”

“My own mother was mentally ill and the only time she found stability was when the government bought a building and turned it into studios,” Reedy says. “My mother found recovery in that.”

“It’s almost as if homelessness is being seen as an eyesore,” Sherrie Royster, Legal Director of the ACLU Of Nevada said on KNPR of Mayor Goodman’s suggestion to confine homeless people with severe mental illness to the Jean prison.  “And we want to move them 30 miles away. Out of the sight of everyone else and basically, commit them. … That’s going to solve your problem. They don’t have cars. They can’t get back.”

“If homeless people have their lives here, it doesn’t mean they don’t have connections or families,” Royster said. “If you want to help them, build a facility here to help them.” 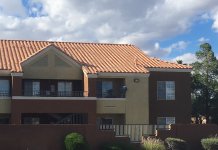 Public health services: Trying to keep up when your state is...