In a unique Nevada twist to a national debate, animal lovers asked Nevada gaming regulators Thursday to crack down on what they call unlicensed gambling conducted at coyote killing contests and other similar events, hoping the lack of prize money will dry up demand.

The contest is simple.  The person who kills the most coyotes wins the prize.

“The Nevada Gaming Commission may not have the authority to ban or denounce the contests; however, the NGC does have the authority to ban the sponsors from offering gaming and Calcutta betting, which is a large component of the contests,” Fred Voltz wrote to Nevada Gaming Commissioners on behalf of the Nevada Wildlife Alliance, Animal Wellness Action, No Bear Hunt Nevada and the Humane Society of the United States.  “These contests are not the same as fishing derbies and tournaments, or golf tournaments.”

“We made our best case, which was completely ignored by the Nevada Gaming Commission today,” Voltz told the Current Thursday.  “Their focus seemed to be ensuring the maximum fundraising capabilities for various non-profits through gaming-related activities, even when it involves 18-21 year-olds who cannot bet money in games of chance at Nevada casinos.”
“The fact that they have completely abdicated their oversight responsibilities for gaming activities at wildlife killing contests was of no consequence,” Voltz said.

Coyote killing contests are widespread throughout America and illegal only in Vermont, New Mexico, Arizona and California.

“The momentum against these contests reflects changing attitudes among citizens and a growing disgust toward the cruelty and inanity of these events,” says ProjectCoyote.org, noting the Arizona ban was rejected 20 years ago by the same body that approved it last month.

“When you have surrounding states that have banned these activities, they just come here, do it and leave,” says Voltz.

The Massachusetts Wildlife Commission is poised to vote next month on a proposed regulation “that would prohibit contests for the capture, take or waste of certain predator or furbearing animals” and would prohibit the “waste” of certain game animals and birds.

“We are strongly opposed to wildlife killing contests, and have been fighting them all across the country,” says Patrick Donnelly, Nevada Director of the Center for Biological Diversity, which led the fight to ban killing contests in Arizona but is not part of the coalition lobbying Nevada gaming regulators. “We are not an anti-hunting organization. Far from it. But wantonly slaughtering coyotes or other wildlife just for the thrill of killing something is bloodsport.  It’s immoral and has no place in a civilized society.”

“A coyote is basically a skunk or a rat or a predator,” Larry DeKam, a California rancher listed as an organizer of the Official Coyote Derby in Austin, Nevada, said in a phone interview.  “All they do is kill baby goats and calves. Everyone says they like to watch them run until they kill one of your pets.”

DeKam says he was unaware the practice is illegal in California.

“We go to Nevada because there’s more open land.  That’s where the ranchers are who want this. We’re providing a service by killing coyotes,” DeKam said.

“If we have to exterminate all the native species in order to ranch, then we probably shouldn’t be ranching,” says predator-friendly rancher Becky Weed in a video produced by ProjectCoyote.org, an organization working to end killing games.

“Coyotes are resilient.  Eradication doesn’t work,” says Voltz. “Nature abhors a vacuum.  These mass killings cause juveniles to breed prematurely. They are unsocialized animals and more likely to do the things we don’t want.”

“Mass killing of native carnivores disregards the critical role that these species play in healthy ecosystems and creates chaos in the family structures of the targeted species, which may result in increased conflicts with livestock, pets and people,” according to Project Coyote.

“The participation in these games is not a ‘gambling exposure,’ but rather an opportunity to assist in the preservation of this State’s natural resources,” Tony Wasley, Director of the Department of Wildlife (NDOW), wrote to gaming regulators.

Wasley told the Current he was not referring to the killing contests, but rather the ability of youth to take part in conservation contests.

NDOW is urging gaming regulators to maintain their tolerance of Calcutta betting at so-called sporting events, a position adopted in 1972 by a gaming policy committee and endorsed in 1977 via an Attorney General’s Opinion.

“We appreciate the opportunity to voice our support for the written comments submitted by Ducks Unlimited, Nevada Bighorns Unlimited, and the Rocky Mountain Elk Foundation,” Wasley wrote to regulators. “These organizations regularly hold events for conservation and conservation enthusiasts. The events raise much needed money for conservation.”

“The Department of Wildlife and the State of Nevada depend on monies raised from these organizations’ innocent and harmless events in order to more effectively protect, enhance, and restore wildlife and the habitats upon which they rely,” Wasley wrote.

“I’m not aware of one penny from coyote killing contests that goes to conservation,” Donnelly said. “Certainly NDOW isn’t getting any of that money that I’m aware of.”

In contrast to the killing contests, which the Wildlife Commission has refused to prohibit, the department’s website states that “most coyote management is limited to removal of chronic problem animals.”

Note: This story is updated with comment from NDOW director Tony Wasley. 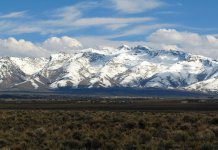