While some escort services are discreet, Las Vegas Escorts, which lists the same Industrial Road address as Rashid’s Mally Mall Promotions, was not.

“The choice is clear when it comes to sex for hire…” reads Las Vegas Escorts’ Facebook page, last updated in the summer of 2014, months before FBI agents raided Rashid’s home in September of that year. KLAS-TV’s George Knapp first reported the raid and the federal probe.

An email obtained by the Current reveals Rashid was on Metro’s radar for at least five years before the FBI stepped in and raided his Las Vegas home and business.

It was July 20, 2009, when then-Metro Sergeant Norm Jahn ran the license plate of a Rolls Royce in valet parking at Bill’s Gambling Hall. The vehicle belonged to Jamal Rashid.

“Has Vice ever heard of this guy?” Jahn asked Sgt. Gavin Vesp of the Tourist Crimes Unit in an email.

“Turns out VICE is actually working him so we are backing off,” Vesp replied.

“Vice already knew who he was a decade ago, yet no arrests. That is the essence of a protection racket at play. Vice tells him (Vesp) to stand down and we all back off the intel,” Jahn told the Current following the announcement earlier this month of Rashid’s guilty plea on one count of Use of an Interstate Facility in Aid of an Unlawful Activity.

U.S. Attorney Nick Trutanich will not say why Rashid was not charged with sex trafficking, which would have required him to register as a sex offender.

Rashid’s sentence, should U.S. District Judge Richard Boulware agree to the negotiation, could range from one to 33 months in prison.  House arrest and supervised probation may also be in the mix.

Among the provisions in the plea deal — the U.S. Attorney’s agreement not to “bring any additional charges against defendant arising out of the USAO’s investigation in the District of Nevada and elsewhere that culminated in this agreement, including any potential charges to offenses with no statutes of limitations.”

Such offenses would include sexual assault and murder.

Jahn threatened to expose what he called “strategic corruption” in Metro’s vice department. He wrote for a Las Vegas publication about his termination from Metro in 2011, and says he was contacted several years ago by FBI agent Kevin White of the bureau’s public corruption unit.

“He asked me to keep it quiet because I was writing columns in the Las Vegas Tribune. I never revealed a name or anything until recently when he wasn’t responding,” Jahn says of White, who conducted initial interviews in the FBI’s five-year probe of Metro’s vice department and allegations police were protecting certain pimps and targeting others. White is believed to have been removed from the case.

Clark County Sheriff Joe Lombardo and District Attorney Steve Wolfson — and the departments they run — emerged unscathed from the case that caused a shake-up of Metro’s vice department, cost Wolfson’s office a major conviction, and prompted the FBI to target a pimp who was inexplicably ignored by Metro for years.

“It’s kind of shocking. I expected people from Metro to be charged,” Jahn says of the plea agreement negotiated by Trutanich, who declined to be interviewed by the Current, but said in a news release an “extensive inquiry” that lasted five years failed to turn up evidence warranting charges against anyone but Rashid.

“I was quite surprised,” defense attorney Janiece Marshall told the Current of Trutanich’s decision to prosecute only Rashid. “I thought they were going to prosecute one or two officers.”

Marshall is referring to former Metro Vice Detectives Christopher Baughman and Al Beas, who are alleged to have coached, coerced and had sex with witnesses in prostitution cases, and accepted cash in exchange for targeting competing rings, according to sworn affidavits filed on behalf of Marshall’s client, convicted pimp Ocean Fleming.

Prostitutes and others who alleged Fleming kidnapped, choked or otherwise abused the women who worked for him recanted the testimony that helped land him behind bars for life in 2012.

Baughman is now married to assistant district attorney Elizabeth Mercer and no longer working for Metro.

Jessica Gruda, the key witness in Fleming’s 2012 conviction, testified Baughman and Beas tipped her off to “which casino properties to avoid prostituting at because other police officers would be conducting prostitution sweeps.”

In an affidavit, Gruda said:

Beas remains at Metro but is no longer a vice detective.

Testimony that police coerced witnesses to augment their testimony against Fleming was not enough to cause Trutanich to file additional charges, but the evidence was sufficient for District Judge Michael Villani to approve a negotiated deal to throw out 20 of the 23 counts on which Fleming was convicted in 2012 for kidnapping and torturing prostitutes.

“Based on what witnesses told me and the affidavits I entered in court, it would seem there would be sufficient evidence to warrant prosecution,” Marshall said.

“I don’t know what investigation the FBI and U.S. Attorney’s office did,” Marshall added.”Based on what I did there’s a real question of why the police officers haven’t been charged.”

Fleming was to be eligible for parole in 2027. Now, he’ll be released from prison in January.

Marshall is appealing the state’s pre-sentence report which was based in part on information supplied by Baughman.

“I still don’t think the Baughman evidence should have been considered,” Marshall said, noting the former vice detective invoked his Fifth Amendment right against self-incrimination rather than answer questions under oath.

Sheriff Lombardo did not respond to the Current’s request for comment.

For want of witnesses?

Why would U.S. Attorney Trutanich settle for a one count plea agreement from a ubiquitous sex trafficker rather than take the case to trial?

It’s unknown whether ample witnesses were willing to testify at trial.

A Las Vegas high fashion model, said by sources to be one of the first witnesses in the FBI’s probe of the Las Vegas Metropolitan Police Department’s vice squad, was found dead in her home in September 2018, a year before Rashid entered the plea deal.

Josie Jones, 29, also known as Joset Jones, died of asphyxiation by suicide, according to the Clark County Coroner.

Jones, a Moapa Valley High student from the class of 2007 according to her Facebook page, was an accomplished model for such brands as Guess and Marciano.

A source with ties to the FBI investigation says Jones was involved in the prostitution ring and interviewed by the FBI early in the probe.

Rashid admits in the plea deal to operating the ring out of a variety of escort services between 2002 and 2014.

But Rashid’s empire may not have crumbled the September 2014 day the FBI raided his home and business.

Documents obtained by the Current reveal that in 2015, Morgan Fitzpatrick, the daughter of Clark County District Judge Michelle Leavitt, told prosecutors she was recruited by a school friend, Shane Valentine, to work for an escort service called Las Vegas Platinum Girls.

Clark County’s business license database has no listing for Las Vegas Platinum Girls, but the “out of business” date for Mally Mall & Platinum is Sept. 5, 2018, four years after Mall’s reign came to a close, according to the federal plea agreement. The license was last renewed in February 2018, according to the county. Rashid’s attorney, David Chesnoff, did not respond to the Current’s requests for comment.

Valentine is a person of interest in the unsolved 2016 execution-style double murders of 20-year-old Sydney Land and her 19-year-old boyfriend, Nehemiah Kaufmann. He is currently imprisoned for burglaries and for shooting into the home of Kaufmann’s mother just weeks before the murders. Valentine’s recent application for parole was denied.

Valentine, like Rashid, was alleged to enjoy the protection of police.

Grand jury exhibits reveal that in the weeks before the murders, Kaufmann alleged in text messages that Valentine was a police informant.

Valentine’s attorney, Adam Gill, has declined to discuss his client.

Gill served as special prosecutor in Fleming’s retrial. Gill agreed to negotiate within days of Marshall adding Las Vegas Justice of the Peace Melanie Tobiasson to her witness list. Tobiasson alleges Valentine was targeting the daughters of police and judges for prostitution. 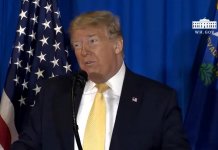 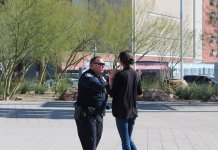 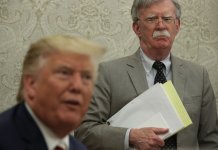 After GOP (minus one) acquittal, NV senators wary of an unchecked Trump