A new migrant justice platform led by a nationwide alliance of immigrants rights groups is calling for a departure from a “failed” comprehensive immigration reform debate and an overhaul of strategy.

The Blue Ribbon Commission ⁠— a group of 20 individuals, from various grassroots organizations, backgrounds, and communities dedicated to immigrant rights ⁠— drove the development of the Migrant Justice Platform “for use by the next administration to immediately repair harms and reverse failures caused by previous administrations.”

“Migrant workers subsidize the global economy,” the platform reads. “That’s not up for debate.”

Long term goals, according to the platform, must move past the national “single-bill” strategy that has defined immigration for the past two decades, and which has emphasized a single massive “comprehensive immigration reform” bill that has failed to materialize under previous administrations.

“There is no single bill that will resolve this country’s racism against immigrants and refugees, but we can start by making clear how much our political representatives have not done, and how much they can still do,” said Opal Tometi, Blue Ribbon Commission member, former Executive Director of Black Alliance for Just Immigration (BAJI) and co-founder of Black Lives Matter, in a statement.

The platform includes concrete policy recommendations to ensure undocumented workers, as well as those in the U.S. under Temporary Protected Status or Deferred Enforced Departure programs, and DACA recipients are granted immediate relief and work authorization. The platform also calls for centering workers’ rights within immigration policy, and a new approach to the borderlands that includes demilitarization and restructuring of border agencies.

“What does immigration and workplace enforcement mean for a country of many nationalities, cultures, and languages, after Trump, after El Paso?” reads the plan.

The El Paso, Texas mass shooting in August was the worst anti-Latino attack in modern U.S. history, killing 22 people and injuring more than two dozen, and launching vigils in dozens of U.S. cities. Francis Garcia, vice president of the board of directors for Arriba Las Vegas Workers Center, lead one such vigil in Las Vegas.

“The people who are being affected are the people who can’t vote. That is the main problem,” said Garcia, who is frustrated by the lack of urgency in Southern Nevada politics to reassure and protect the immigrant community despite the rise of attacks on the community. “They don’t have a voice that represents them and the needs they have. They are part of the economy of Las Vegas, but because they can’t vote they don’t have the power to choose what should be focused on.”

The Arriba Las Vegas Workers Center is part of the coalition pushing the platform and plans to approach local policies in Southern Nevada cities and lawmakers statewide using its tenets. For too long, said Garcia, lawmakers have let the needs of one of the most vulnerable populations in Nevada slide while the nation waits on immigration reform and a pathway towards citizenship.

Part of the platform includes establishing strong labor and civil rights protections for immigrants in consultation with trade unions, workers’ centers, and groups with deep experience with immigrant and other workers in precarious conditions. The Arriba Las Vegas Workers Center is already working on draft proposals to change how the Office of Labor Commissioner interprets and enforces laws that are on the books in order to more fully protect immigrants who experience wage theft, with a goal of getting the policy changes approved during the next Legislative session in 2021.

Bliss Requa-Trautz, director of the Arriba Las Vegas Workers Center has said that immigrant workers in Nevada are suffering from a wage theft “epidemic,” and that the state office charged with protecting workers has been ineffective and unresponsive.

“The problems happening in Las Vegas are happening in other places and nobody is taking care of that. Working-class people have never been heard by those trying to get elected,” Garcia said. “They have been seen as invisible numbers. We know they are there but they don’t have the same rights that another worker has. Compared to union workers, they don’t have the same rights.”

Members and leadership of the Center argue that labor rights and immigrant rights are inextricably linked, from trade agreements that benefit U.S. companies at the expense of rural communities abroad, to temporary work programs that put workers in precarious situations with employers and almost zero recourse.

“Here in Las Vegas you see a lot of laborers ⁠— they’re working from the Home Depot or Lowe’s. And sometimes they work for weeks before getting the pay that they deserve and sometimes they don’t even get the pay. Employer’s promise to pay next week and just don’t pay, threatening to call ICE. There is nobody to protect them.”

Flores’s bill, AB281, sought to ensure that police officers in the field could not detain someone solely on the basis of a possible immigration violation in order to build community confidence among immigrants, and although it was supported by the Las Vegas Metropolitan Police Department it died in the Assembly Judiciary committee without getting a vote.

Garcia called lawmakers capitulation of even the most minimal legislation focused on immigration “very disappointing.”

“They don’t want to have the eyes of the public on them,” Garcia said of some lawmakers. “But I think that is wrong because hiding from something that is happening is not going to solve the problem.”

“We tried to go to visit them and even tried to help with a solution by doing proposals like this one but they didn’t take it as serious as it’s supposed to be because everyone is just focused on being reelected to do nothing,” Garcia said.

Small victories like Metro withdrawing its 287(g) partnership with ICE, are welcome but are not the end of the line, said Garcia.

“Arriba is working with many communities around the United States because that is something that’s affecting not only Las Vegas but all over the country,” Garcia said of 287 (g) partnerships. “If we can stop it here in Las Vegas we can stop it in other places, if we work together. They need to see that the pressure we apply here isn’t going to stop until it completely disappears.” 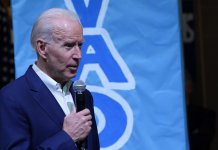