Analysts on Tuesday expressed their continued confidence in Nevada’s economic outlook, pointing to data showing that by many measures the state continues to reach or exceed pre-recession levels.

As of the first quarter of 2019, personal income per capita has nearly matched the pre-recession peak reached in 2006, according to a presentation given on Tuesday by state fiscal analysts to the appointed panel of private sector economic and taxation experts known as the Economic Forum. Personal income refers to a person’s wages and salaries as well as government benefits, dividends and interest, business ownership and other sources of income. Deputy Fiscal Analyst Joe Reel told the panel the difference between the 2019 and 2006 numbers is only a few dollars.

That is good news for a state that’s been slow to recover from The Great Recession. 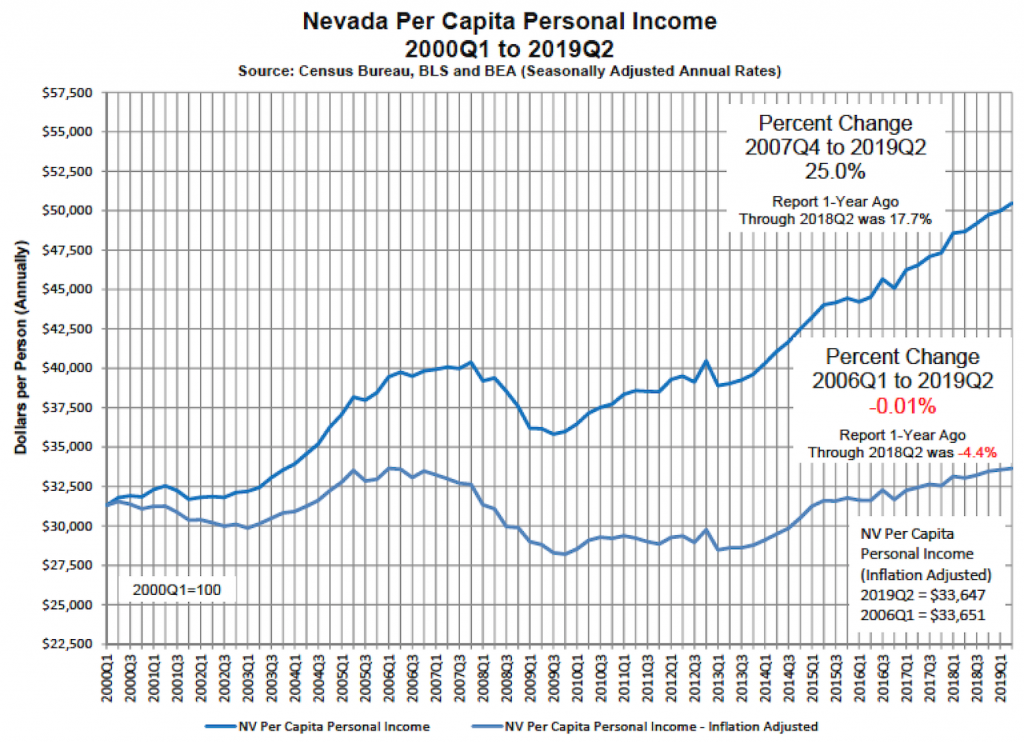 However, Nevada is still lagging when it comes to wage growth.

When looking at total numbers, wages and salaries in the state have steadily risen since the recession, but they have done so at a much slower pace than nationally. Total wages and salaries across the country in the second quarter of 2019 were 42.4 percent higher than at the pre-recession peak in the second quarter of 2008. However, in Nevada, the change between that same time period was only 28.8 percent.

Yet total personal income within the state has matched the national growth pace. Between the second quarters of 2008 and 2019, the percent of change was 47.1 percent nationally and 47.4 percent in Nevada.

Reel, the fiscal analyst, praised the changes in personal income growth as a “victory” but noted “it’s still a concern that Nevada wages are lagging and not really growing as fast as they could.”

No speculation occurred as to why that may be the case.

The state’s analyst did note Nevada wages grew more rapidly than the national rate during the last four economic quarters — 6.1 percent compared to 4.9 percent. Reel later noted that Nevada “isn’t quite there” when it comes to some metrics but is making progress.

In a separate presentation on labor market conditions, David Schmidt, chief economist for the Department Employment, Training and Rehabilitation, noted that Nevada’s employment rate is growing faster than the nation, and that job growth in the state has outpaced the job growth nationally for 87 straight months.

The unemployment rate is 4.1 percent as of October, which is down from 4.4 percent one year prior.

When asked whether Nevada is seeing its economy diversify, Schmidt pointed to several industries that are growing notably faster than the leisure and hospitality industry.  That includes construction jobs, which grew by 11.9 percent over the past year; manufacturing, which grew by 10.2 percent; and professional business services, which grew by 6 percent. The leisure and hospitality industry grew by only 1.7 percent. However, because that industry is so dominant within the state, that 1.7 percent translates to 6,100 jobs and manufacturing’s 10.2 percent growth translates to 5,000 jobs.

“Diversification is a ship that turns slowly,” said Schmidt. “That’s a good thing.”

He also noted that while some of the job growth is in higher wage industries that could help drive up overall wage data, a larger portion are contained within lower-wage industries.

Presentations from Tuesday’s Economic Forum meeting can be viewed or downloaded here.

NV economic update: ‘Diversification is a ship that turns slowly’