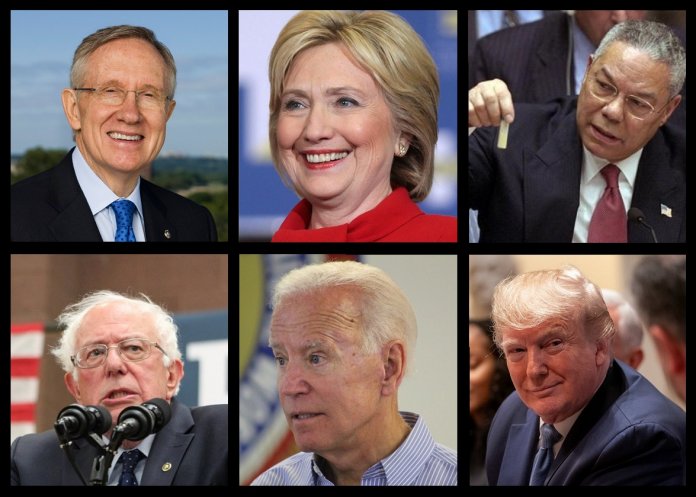 Nevada Rep. Steven Horsford’s reaction to the U.S. assassination of an Iranian leader looks fairly representative of the standard Democratic response, so let’s use that:

Two things are true. First, that Qasem Soleimani was a driving force in the destabilization of the Middle East and orchestrated attacks on American servicemembers.

Second, that his death, coordinated without Congressional consultation, may endanger American lives and interests.

Joe Biden, whom Horsford hasn’t endorsed yet but probably will (because “electability!”), was a wee bit more colorful, describing Trump on Twitter as “an erratic, unstable, and dangerously incompetent commander in chief.”

One thing Uncle Joe has learned during his decades in elected office is how to belabor the obvious.

Bernie Sanders can also belabor the obvious — although the obvious he belabors is often the obvious others would prefer not to say. In his reaction to the assassination Friday, Sanders noted that at the start of the Iraq war in 2002 he warned of the “so-called unintended consequences of a unilateral invasion.” Now, Sanders said,

…that fear has unfortunately turned out to be a truth. United States has lost some 4,500 brave men and women fighting in Iraq, tens of thousands have been wounded, hundreds of thousands of Iraqis have been killed, and trillions of dollars have been spent on that war.

It gives me no pleasure to tell you that at this moment we face a similar crossroads, fraught with danger.

Sanders was one of 133 House members who voted against giving George W. Bush and Dick Cheney a blank check to invade and occupy Iraq in October 2002.

And Biden was one of 29 Democratic senators who voted for it.

Since announcing his candidacy, Biden has made repeated attempts to slap a friendly “never mind” on that vote by saying he had been given assurances from the Bush administration that the vote wasn’t really a vote to go to war but just a vote to get the United Nations Security Council more a-scared of Saddam Hussein.

On a related note, one of Biden’s selling points on the campaign trail this year is that all his experience means he has the best judgment.

But hey, a lot of people voted for the Iraq war, including two of the last three Democratic nominees. Alas, neither John Kerry nor Hillary Clinton won the presidency. (There is a school of thought that says Clinton would have won in 2008, except she lost the nomination to Barack Obama. Because of her vote for the Iraq war).

Maybe the third time’s a charm.

Both Kerry and Clinton offered variations of the explanation Biden is offering now, that the Bush administration somehow let them down and couldn’t be trusted.

But my favorite Iraq War vote explanation of all will always be Harry Reid’s, who has said repeatedly that it’s all Colin Powell’s fault. Oh, not the war. But Reid’s vote in favor of it. That came about, Reid says, because of what Colin Powell said.

On a related note, Powell waved around his little bottle of phony anthrax and nattered on about aluminum tubes at the United Nations in February 2003. Reid and his Senate colleagues voted for the war four months earlier, in October 2002.

Don’t look now, but Republicans are at it again. There’s nothing like an assassination of a violent non-Christian to rekindle that good ol’ post 9-11 bloodlust for death and destruction all wrapped up in red, white and blue bunting and accompanied by some patriotic country song or other.

And Republicans are itching to point fingers at any and all Democrats who, at least according to Republicans, are not exhibiting a sufficient fervor for blowing up brown people.

In the run-up to the Iraq war, Democrats caved. The media helped. Thumping the drums of war from 9-11 through most of at least 2003 was perhaps the most ignominious performance by news organizations since Marconi figured out how to send radio signals. But mostly, Democrats caved all by themselves, out of fear.

If they hadn’t, there might not have been a war. It was the most colossal military policy “oops” in most of our lifetimes, and, as Sanders said Friday, “for what?”

Thus far in the 2020 campaign cycle, the Iraq war hasn’t been much of an issue, and Biden has been able to nuance it away, made easier because a significant portion of the American public also has decided, like Trump, that they never supported the war even though they did.

But with Trump’s escalation of, as Biden put it Friday, “erratic, unstable, and dangerously incompetent” actions, voters must consider which candidates have the courage to reject cheap patriotism and stand up to the popular adrenaline surge pumped by military adventurism.

As it happens, each of what currently appears to be the two frontrunners for the Democratic nomination has a record on the issue.