The labor union best known for representing the checkout personnel at national grocery chains is hoping to negotiate contracts for workers in Nevada’s cannabis industry, from trimmers to budtenders.

The United Food and Commercial Workers’ website says it represents “tens of thousands of cannabis workers across multiple states. UFCW members in the legal cannabis industry work in growing and cultivating facilities, manufacturing and processing facilities, and also in laboratories and dispensaries.”

“Do they want to join a union? I don’t know,” admits a UFCW official who asked not to be named. “They usually reach out when they are getting fired.  We can’t do anything to help them at that point.”

The union did not respond to requests for an interview.

“Clark County is definitely a union town, but Nevada is a right to work state,” cautions Clark County Commissioner and former State Senator Tick Segerblom, widely regarded as the godfather of Nevada’s legal cannabis industry. “Since most states which have legalized marijuana are not right-to-work states, we are probably less likely to unionize than most.”

Nevada has hundreds of marijuana enterprises that employ 8,200 people, according to Riana Durret of the Nevada Dispensary Association.  Roughly 6,000 work directly for dispensaries.

Garcia says the firm-by-firm organizing model of the 1930s “is not working particularly well for people who work for smaller employers.”  He’s an advocate of the Clean Slate Project, a proposal that would result in industry or sector-wide representation.

One such effort by public sector union SEIU to deduct union dues from Medicaid payments for home care workers, also known as personal care assistants, was rejected by the U.S. Supreme Court in 2014.

Cannabis consultant Jason Sturtsman, who also teaches classes about the industry, says he hears a variety of complaints from students employed at marijuana establishments.

“I hear stories about working conditions, especially at dispensaries,” says Sturtsman, who refers students with concerns to the UFCW. “I hear a lot of sexual harassment. Scheduling is a common complaint.  Favorites get the good shifts. People with child care needs don’t get accommodations. Most offer no health care.”

Safety is an obvious concern in the cash-based industry, from dispensary employees to delivery drivers.

“I’ve heard lots of complaints about wages. They are all over the map from minimum wage to a decent livable wage,” Sturtsman says. “It can run as low as $12 plus tips to as high as $15 plus tips.”

Durrett of the Nevada Dispensary Association, says dispensaries in the state pay an average of more than $14 to entry-level employees, according to a self-reported survey.

“If we can get closer to the $20 mark, it’s a nice wage for someone who doesn’t have a college degree,” Sturtsman says.

The cost of unionization has yet to be revealed in the price of marijuana flower at Jenny’s, which is competitive with other dispensaries.

“I believe there are three new jobs, period: Uber, Lyft and weed. We already know that Uber and Lyft aren’t providing a living wage and health insurance,” Waveseer CEO Dave Rosen told Rolling Stone last year.  “The chasm between rich and poor only grows at historic levels, and it has tracked directly with the decline in unions.”

Rosen did not respond to the Current’s request for a copy of his company’s contract with UFCW.

Want a license?  Got a union?

This month, 100 workers at Cresco Labs in Joliet, Illinois, became the first in the state’s weeks-old legal cannabis industry to win a union contract.  The workers are represented by UFCW Local 881.

“Cresco Labs is one of the largest cannabis companies operating in Illinois,” says a UFCW news release.

A lab technician at Cresco Labs is paid between $14 and $18 per hour, according to the job listing website Glassdoor.

In addition to its contracts, the UFCW has negotiated neutrality agreements in several states, including California and New York. The pacts are meant to foster labor peace.

“It’s a precursor that generally indicates a majority interest in forming a union,” says Garcia.

In some states where marijuana is legal, a union affiliation is required for license applicants. In other states it’s rewarded in the license selection process.

“Are you applying for an Illinois Adult Use Cannabis Dispensary License?” asks the website for Workers United, an SEIU-affiliated union. “You can win needed points towards your application score with Workers United!.”

“That’s very interesting but it’s not common,” says Garcia. “It could be problematic in terms of federal labor law, which preempts state law.”

“There have been situations where what licensing bodies have tried to do has been preempted by federal labor laws,” says Garcia, referring to the mandated linkage of a licensee and labor union.

While a state can put restrictions on the use of certain resources by requiring participation of organized labor, states have been preempted from requiring the private sector do the same.

“If it’s a project labor agreement, it’s fine,” says Garcia.  “If it’s an intervention of the state law, it could be problematic.”

Big labor’s footprint has helped the suspect cannabis industry pave the way with wary lawmakers who find familiarity with the unions.  It’s also accompanied the kind of big money takeovers that make it unlikely small operators can compete.

Nevada’s cannabis industry, which once favored local business interests over outsiders, is increasingly held by foreign interests with multi-state operations, a development that could cut both ways for the labor movement.

“Consolidation probably facilitates unions because corporations which are unionized in other states and countries are probably not opposed to unions in Nevada,” Segerblom says.

“Concentration of corporations can sometimes be negative in terms of layoffs,” says Garcia.  “Sometimes it works to the benefit. In the hospitality industry, consolidation has led to pattern bargaining.  The major resort companies come to terms and the smaller properties fine-tune to suit their needs.”

UFCW’s vertical integration in the cannabis industry can be fraught with conflict, Rolling Stone reports. The union lobbied in California on behalf of distributors who opposed efforts by growers (also represented by the union) who wanted to sell their product at fairs and farmer’s markets.

The union and the distributors prevailed. 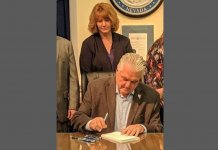