The payday loan company Rapid Cash is helping people on the verge of homelessness with emergency housing assistance. Sort of. Not really.

The Legal Aid Center of Southern Nevada announced Thursday it was using $707,000 received from an unnamed legal settlement to go toward emergency housing assistance for clients at HELP of Southern Nevada, the group that will actually be helping.

“When we settled this case, the defendants asked us not to speak publicly about the details of the case,” he said.

According to a 2010 Las Vegas Review-Journal, Legal Aid, along with Gayan’s law firm Kemp & Jones filed a lawsuit against Rapid Cash in 2010 on behalf of clients Casandra Harrison, Eugene Varcados, Concepcion Quintino and Mary Dungan, the latter who spoke at the event Thursday.

All four were subjected to wage garnishment after the Las Vegas Justice Court issued a default judgement against them. The thing was, they alleged they didn’t learn of default judgments until their wages were garnished and were never even served copies of the court documents.

The lawsuit, according to the Review-Journal, claimed Rapid Cash didn’t stop its process server for allegedly lying to the Justice Court and claiming the four were served.

“It went up to the Nevada Supreme Court and even made a trip to the U.S. Supreme Court before we got it resolved,” Gayan said. “The litigation took seven years and the settlements claim process took another couple years. We just finished giving away as much money as we could to the class members.”

Gayan’s clients received a settlement, but $707,000 was unclaimed.

“The judge involved approved the Nevada Community Foundation and their endowment fund, specifically the Southern Nevada Emergency Rent Fund, as the recipient for the unclaimed funds however much it might be,” he said.

HELP will be able to access the funds to help clients on the verge of homelessness — ironically, people who often rely on payday lenders during financial emergencies.

“So many folks know we are dealing with chronically homeless or homeless youth, but there is still the population who is working and paying rent, but they are just rent burdened,” said Fuilala Riley, the president and chief executive officer of HELP of Southern Nevada. “We are exploding in population and rents are going up. They aren’t staying in pace with hourly wages.”

Some of the clients they work with are just one emergency — a car repair, medical bill or loss of income — away from being unable to pay rent and potentially becoming homeless.

“I’ve heard leaders in our community use the analogy of a bathtub,” she said. “The water in the bathtub is the homeless existing right now. When you turn on the facet, more people enter the bathtub. If we don’t slow the facet or open the drain, it’s going to overflow. We are somewhere at the overflow period.”

It makes more sense, she added, to keep a person in their home and prevent homelessness altogether rather than working to get someone experiencing homelessness back into housing.

“We have to get them back into housing and give them the support to go along with it,” Riley said. “Even the mental health portion of becoming homeless, that is hard to get over.”

But the funding to keep people in housing and prevent homelessness isn’t always available.

Federal funding, Riley noted, often comes with too many stipulations and the nonprofit can’t be flexible in how it spends it.

This isn’t the first time HELP has been able to use flexible funding to assist people already experiencing homelessness or on the verge. 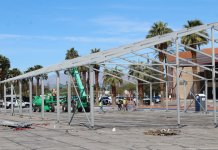 The privatization of public housing