According to The Associated Press tallies as of Sunday morning, Sanders had won about 46 percent of delegates awarded in the caucus, to 20 percent for Biden. Pete Buttigieg is in third place with 15 perent, followed by Elizabeth Warren at 10 percent, Amy Klobuchar at 5 percent, and 4 percent for Tom Steyer.

Sanders delivered a victory speech in El Paso, Texas, one of multiple stops his campaign had scheduled Saturday in the delegate rich Super Tuesday state.

“We are going to win the Democratic primary in Texas,” he said to cheers. “And you know, this is also important, the president gets upset very easily. Don’t tell him we’re going to beat him in Texas.”

“And now I’m delighted to bring you some good news.  We won the popular vote in Iowa. We won the New Hampshire primary.  And according to three networks and AP, we have won the Nevada caucus,” Sanders said. “Let me thank the people of Nevada for their support.  In Nevada, we have just put together a multigenerational, multiracial coalition that is going to not only win in Nevada, it’s going to sweep this country.”

Turnout was reportedly light at many of the more than 2,000 precinct caucuses around the state, indicating a majority of participants chose to vote early. More than 75,000 people took advantage of early voting.

It was the first time early voting, which was conducted Feb. 15-18, was tried in a caucus. If that were not enough, the Iowa fiasco prompted Nevada to redesign the caucus process, including implementing a hastily built system for marrying early votes with Saturday caucusgoers.

But despite skepticism from the press, the campaigns, and even party volunteers, and though results were coming in slowly, the party may have avoided the worst of the dreaded “caucus chaos.”

Sanders, who narrowly lost the Nevada caucuses to Hillary Clinton in 2016, had been leading in multiple polls of Nevada in the days and weeks leading up to the caucus.

Sanders, the Culinary and the Strip

As the Nevada campaign began garnering more attention after Iowa and New Hampshire, one of the main storylines was the Culinary union’s concern about Sanders and his support for Medicare for All.

However, despite the Culinary’s criticism of Sanders, the union failed to endorse any other candidate. That non-endorsement may have been particularly tough for Biden, who had been endorsed by state Sen. Yvanna Canela and U.S. Rep. Steven Horsford, both of whom have worked for the union.

And on Saturday, in precincts located on the Strip by the Democratic Party with an eye toward aiding Culinary member participation in the process, Sanders performed very strongly.

At the Bellagio, 123 of its workers, many still in their housekeeping outfits, filed into the Ballroom for one of the Strip caucus locations.

Billionaire Tom Steyer, along with a handful of supporters, stood outside the precinct ahead of the count, but he didn’t reach viability.

On first alignment, Sanders supporters made up the majority. Monica Smith, 54, who works at the Bellagio, was one of them.

Before the second alignment, it was Smith who made the case to six Warren supporters to join the group. Only one joined, the others went to Biden while two were uncommitted.

“I think my children and your children should all have health care,” she said to a crowd after the first alignment. “Copays are astronomical under Obamacare.”

She addressed the Medicare for All question head-on.

“I worry because if I were to lose my job here, the Culinary position I have, I would only carry my insurance for three months,” Smith said, explaining why she supports Sanders and his health care proposal. “Then what would happen? Would I have to go get Medicare? Would I have to get Medicaid? Wouldn’t it be better if there was already a plan there, a net to catch you?

Saturday’s caucuses, Smith argued, paints a different picture than that back-and-forth between the union and the Sanders campaign.

“I think today was a very good example of Culinary,” Smith said. “They told us they weren’t going to choose. I’ve been a member since 1987. I stand with them. They are my mother ship. We may have disagreements along the way. But the number one thing we do is protect our members.”

With only 4.3% of precincts officially reported, Biden took stage at IBEW local and gave what might be described as a victory-ish speech. Pundits have generally agreed the former vice president needs a strong showing in Nevada to counteract disappointing finishes in Iowa and New Hampshire. At the time of his speech, Biden was in second place — handily behind Sanders but ahead of the other candidates.

“Comeback king!” A supporter shouted to a round of applause.

Biden thanked his precinct captains and gave a shout out to the two members of the Nevada Congressional delegation who endorsed him — Reps. Dina Titus and Steven Horsford.

“Y’all did it for me!” He said confidently.

He named none of his Democratic competitors by name but did take obvious barbs at them.

“I ain’t a socialist. I ain’t a plutocrat. I’m a Democrat and I’m proud of it,” he said, referring to self-described democratic socialist Sanders and the entirely self-funded billionaire Michael Bloomberg, who did not appear on the Nevada ballot but is considered a threat on upcoming Super Tuesday.

Shortly after Biden finished his speech, the Associated Press called the race for Sanders.

Sanders and the Latino vote

The East Las Vegas Community Center is in a predominantly Latino neighborhood, a demographic Sanders won by 51 percent in Nevada, according to CNN entrance polls, launching him to victory. And as if to foreshadow the results ahead, Sanders won all six of the precincts represented at the center.

Participants reflected the diversity of East Las Vegas from Latino men in cattleman hats and cowboy boots to young women in hijab.

Sanders was the only candidate viable in all precincts on the first count and in one, he was the only viable candidate at all with 20 votes, winning all eight delegates. The next closest candidate in that precinct was Warren with five votes.

Most participants chose to vote early. In one precinct Biden and Sanders were the only candidates to hit viability with only one Biden supporter showing up in person while 13 were present to support Sanders.

Men and women were covered in Sanders gear — shirts, buttons, stickers — throughout the ballroom where the caucuses took place, many of them Latinos who said Sanders’s campaign was the only one that reached out to them.

Supporters for other candidates had to strategize to remain viable. Warren supporters joined up with Buttigieg voters in one precinct to be eligible for delegates. And while tensions rose as supporters fought for delegates many voters were satisfied with the results.

“The whole thing was pretty cool to see hands on. Everyone had their opinion on the caucuses but coming and seeing it, it’s completely different than I thought it was,” said Tupas, who caucused for Sanders.

His precinct was the largest group, taking several hours to come to a conclusion. Rather than vote early Tupas said he chose to participate in person to understand the process and ask questions.

Chloe Danek, 26, was undecided at first but ended up voting for Sanders. The caucus was her first time voting in any election and she was persuaded into participating by her friend Tupas.

“It was as organized as it could be for what it is,” Danek said. “You meet a whole bunch of different types of people. I think everyone was very respectful.”

Michael Brown, 64, describes himself as a moderate and came in intending to vote for Biden but after the former vice president failed to meet the viability threshold, Brown aligned with Warren in the end.

“It was interesting and enlightening and I was glad I came out and participated in it,” Brown said, adding that it was his first caucus experience. “I felt that I had the opportunity to cast my vote for Biden and to see how my other brethren in the Democratic party leaned.”

He said he understood why many people found it inconvenient or impossible to participate in caucuses, but had a pleasant experience himself.

Not all voters at the site felt the same.

Jergans said she would prefer a primary over a caucus, expressing frustration with the process which she said was disorganized compared to previous experiences and longer than usual, adding that she wished she had voted early.

“I wanted my vote to count,” Jergans said. “I really like Warren. I think she’d do us all good.”

While Buttigieg initially congratulated Sanders on his win as he addressed supporters at the Springs Preserve, the former mayor used his speech to set focus on two targets: Sanders and Donald Trump.

“Sen. Sanders believes in an inflexible, ideological revolution that leaves out most Democrats not to mention most Americans,” Buttigieg said.

“That is a real difference of Sen. Sanders’ revolution with the tenor of combat and division and polarization leading to a future where whoever wins today nothing changes the toxic nature of our politics.” 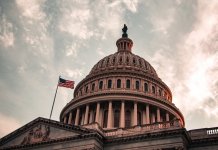 Having to be twice as good – African American women in...