Citing a “culture of unsafe patient care,” a “hostile work environment,” and fear of personal liability, at least four staff members at CrossRoads of Southern Nevada, a detox and short-term living facility supported by county, state and federal money, resigned in the past week.

“Due to (the) current culture of unsafe patient care and an existing hostile work environment for Behavioral Health Professionals, as well as concerns of personal liabilities for myself and family, I am willing to face unemployment,” housing supervisor Richard Hayes wrote in his resignation letter Monday.

The resignations come on the heels of the termination Monday of former president Kevin Morss, who was let go, according to his wife, Jennifer, the facility’s former COO who was laid off Jan. 2.  Her husband was let go within minutes of Jennifer Morss’ email demand for repayment of $48,000 she loaned the company on Dec. 3 to cover payroll checks.

“More than two months have lapsed since Ms. Morss made this loan to CrossRoads, and to date CrossRoads has not repaid Ms. Morss,” attorney Maggie McLetchie wrote in an email Monday to Dave Marlon, the newly named CEO of CrossRoads.

“Dave got rid of all the women in management positions and brought in his own people,” Morss said. “They want me to sign a document agreeing not to take any legal action against them.”

Marlon has failed to respond to numerous requests for comment.

“Your source of information is trying to paint a negative picture that simply is false,” Jeff Iverson, who founded CrossRoads, said via text, in response to questions about staff terminations, Morss’ loan to cover payroll, and allegations of mismanagement under Marlon.

Asked what was false, Iverson responded via text “All of it. It’s obvious where this distorted version of the truth is coming from. Yes, I’d be happy to meet you sometime.”

Iverson has not responded to subsequent requests.

A spokesman for Clark County says the government is concerned about the allegations raised by current and former employees but confident the facility can provide the contracted services.

“Health Care Quality and Compliance officials have told us that many of the complaints were unfounded, some issues that were identified are being addressed, and that at this time the facility is able to care for clients,” said County public information officer Dan Kulin. Kulin did not respond when asked to identify what complaints were unfounded or what issues are being addressed.

Substance abuse has long been a barrier to shelter for the homeless. But CrossRoads, which opened in 2018, offered an innovative approach.

“No one else has this model in Clark County,” Kirkpatrick proclaimed in December of the facility known for offering addicted, homeless or mentally troubled Southern Nevadans a place to not only get clean but also to stay for as long as several months — a critical component to recovery.

In November, Marlon, a recovery executive acting as a consultant, took over management of Crossroads, says Morss. In December, within days of winning the county award and agreements with specialty courts, Marlon cut 20 percent of the staff in an effort to increase profits, Morss says.

“We were treating the Medicaid population. The board members wanted a bigger return on their investment,” Morss says.

Board members contacted by the Current declined to discuss CrossRoads’ operations.

“I’m a passive investor. I don’t know anything about the operations,” board member Stu Engs said when reached by phone. “Ask Dave Marlon.”

The focus on profit is taking a toll on CrossRoads and its clients, Morss says.

The facility’s website boasts 181 beds and a patient-to-staff ratio of 10 to one. But Morss and half a dozen current and former employees say the ratio of mental health techs and nurses to patients is closer to 30 to one in the detox unit and 60 to one on the residential floor, which houses rehab and homeless clients, as well as specialty court defendants — nonviolent offenders with mental health or substance abuse problems.

Photos and videos provided to the Current by Morss and employees reveal a facility in disrepair.

In one video provided by Morss, rainwater pours from the ceiling of a second-floor room where Morss said medication is kept.

Mold and asbestos reports commissioned voluntarily last month by CrossRoads reveal the presence of both. Executives declined to say whether they intend to have toxins removed.

A photo provided by Morss captures what appears to be mold seeping between cracks in a ceiling tile in the medication room.

“The mold and asbestos issues haven’t been formally discussed with staff, so they are not able to address patient concerns with any level of education about the situation,” Hayes wrote in his resignation letter.

“Investors tell us in finance meetings to just paint over it,” says Jennifer Morss.

Morss and her husband were employed at CrossRoads since it was opened in 2018 by Iverson, who also founded the residential treatment facility Freedom House. The facility was previously Charleston Residential, a home for senior citizens. As Crossroads, the facility relied on Medicaid payments and struggled financially.

“Dave brings some skill sets that will really be valuable,” Iverson told the Current in January, adding the facility had money problems in 2019. “The only troubles we were having is billing and getting claims paid.”

Marlon, the founder of the now-defunct Las Vegas-based Solutions Recovery, became CEO of CrossRoads in January, according to a news release from Vegas Stronger, a foundation Marlon created in 2014, originally under the name Solutions Recovery Foundation.

Patient safety is being ignored and possibly compromised, according to former and current employees, as well as a vendor.

“What I don’t want to see down the line, the money gets funny and the change gets strange and we see people getting dumped on the street after one or two days,” Commissioner Lawrence Weekly cautioned in December before voting to award $7.2 million to CrossRoads.

Weekly is referring to “turn and burn,” a phenomenon of the treatment industry that has plagued county efforts to treat, stabilize and house vulnerable segments such as the homeless and mentally troubled.

The county reimburses treatment facilities at the rate of $560 a day for a bed in a detox ward, while a bed in a short-term housing unit pays $60 a day.

“The business model now is to discharge them from housing before they are ready so they relapse and go back to detox. The facility gets more money if they are in detox than if they are in housing,” says Jennifer Morss.

Kirkpatrick, who previously gushed about CrossRoads, declined to comment at length.

“I don’t know much about their day-to-day operations but I will ask Social Services,” she said.

“The whole goal was to keep patients as long as they need to be here,” says Tucker, the former director of Behavioral Therapy. “Now, it’s keep them as long as they make us money. 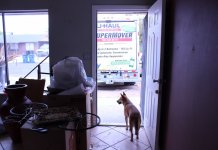