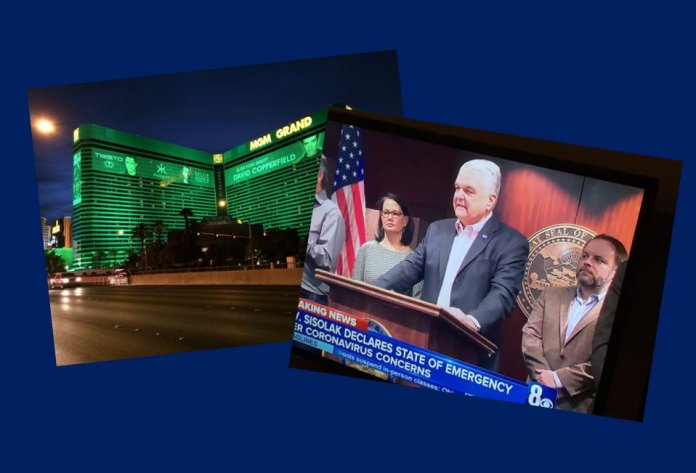 MGM wasn’t saying how many, as of Saturday, but it is laying people off. The largest employer in the state’s largest industry won’t be the only one. Economists and analysts, in Nevada and the nation, have been mostly reluctant to predict how deep the economic havoc wrought by COVID-19 will go, or how long it’ll last. Public uncertainty and fear in Southern Nevada weren’t tempered by an MGM letter that some employees found frustratingly vague.

Public officials in Nevada, with unsurprising exceptions, have been taking the proverbial drink from a fire hose trying to keep pace with the medical ramifications of the crisis. And that is as it should be. The better Nevada and the world ascertains the scale of the disease’s spread and slows it down, the sooner we’ll get past this.

But public officials and the private sector must also take measures to help people who are losing their livelihoods.

As of Saturday morning, perhaps the most direct action the state had taken on that front was urging an anticipated rush of people filing for unemployment claims to please do it online. That was followed Saturday afternoon by the Department of Employment, Training and Rehabilitation announcing it would also be expanding business hours.

When he declared a state of emergency Thursday, Gov. Steve Sisolak was asked by Nevada Current reporter Michael Lyle how the state is responding to COVID-19’s economic impact. Specifically, Lyle asked about the possibility of expanding and extending unemployment benefits, and putting a moratorium on evictions.

Everything better be on the table. And quick.

The package already passed by the U.S. House and expected to be approved by the Senate this week will provide some relief. To some people. Though as Rep. Dina Titus predicted after the House vote, “another emergency response package will be necessary.”

By the way, a recent Federal Reserve study reported that 40 percent of Americans can’t cover a $400 emergency expense.

In Hong Kong, the government just cold gave people money. Calls to give every adult in the U.S. $1,000 a month are getting louder. And not just from Andrew Yang.

Cash money would be particularly helpful for the pretty large portion of Nevada’s workforce employed in part-time and/or precarious jobs. And direct cash payments might be even more vital for those in the so-called “gig economy.” Labeled, or mislabled, as independent contractors, they can have virtually no safety net.

Washington state has taken several steps to, as Gov. Jay Inslee put it, “mitigate the economic hardships this situation is going to cause.” Those measures range from expanding eligibility and flexibility of the state’s unemployment insurance program, to strengthening its already generous (by typical state standards) family and medical leave program.

This seems a good time to remind everyone the paid leave policy that went into effect in Nevada this year allows employees to accrue 40 hours worth of leave per year, provided they are full-time, and they work somewhere with more than 50 employees. In other words, it’s profoundly inadequate.

Following similar efforts in San Francisco and San Jose, the city of Los Angeles and California state lawmakers are considering the aforementioned ban on evictions. Nevada is a “Dillon’s Rule” state, meaning cities and counties usually don’t have the authority to do much of anything unless the Legislature says they can, so a ban on evictions would likely have to come from the state.

Here in Nevada, NV Energy and the Las Vegas Valley Water District announced Friday they would not cut off services for the time being. They were joined by Southwest Gas and the Truckee Meadows Water Authority.

Internet and cell phone service providers are not public utilities — a discussion for another time — but the services they provide are essential, and if they don’t want to follow suit, the state should see if it can make them.

The state should see if it can do a lot of things. Nevada is not Washington, New York, or California (please, now is not the time for the Californication noise). Nevada’s economy is unique. That’s why the hit on Nevada’s economy will be uniquely hard.

That’s also why Nevada industries that are faring better than others need to step up, whether they want to or not.

Good. To reiterate, mitigating and containing the disease must be the state’s top priority.

During his remarks while declaring a state of emergency Thursday, Sisolak said he is “confident that we have adequate reserves,” presumably referring to the state’s fiscal situation.

That’s Nevada all over. Apart from the public subsidies and giveaways to business, Nevada doesn’t have, and maybe has never really had, what could fairly be called an economic policy. Ask a Nevada politician about state economic policy, and chances are you’ll get an answer about the state budget. So that needs to change.

Sisolak also said Thursday that his office is “in constant contact with the resort operators” and “working hand in glove with our resort partners.”

That, too, of course, is Nevada all over. But you have to suspect, and certainly hope, Sisolak understands that in this very different kind of crisis, economic measures must focus on working people directly — that this time, the customary belief that the best way to help workers is to help their bosses doesn’t apply, that helping people, not companies, is what will be best for the economy.

And since the governor and his team are “in constant contact” and “working hand in glove” with the resort industry, they need to make sure the industry knows that too.

Nevada must also act to ‘mitigate and contain’ the economic pain