All Nevada K-12 schools will be closed until at least April 6, Gov. Steve Sisolak announced Sunday.

The governor stressed the decision was “difficult” and “did not come lightly” given the hardships it puts on families, but he said it had become “increasingly clear” over the past 48 hours that further social restrictions are needed to curb the spread of COVID-19, the respiratory disease caused by the novel coronavirus.

Sisolak clarified the closure applies to all schools — public, private and charters — and said schools will not be reopened until being cleared by the state’s chief medical officer. When asked about daycares and non-district preschools, the governor said further guidance would be coming. 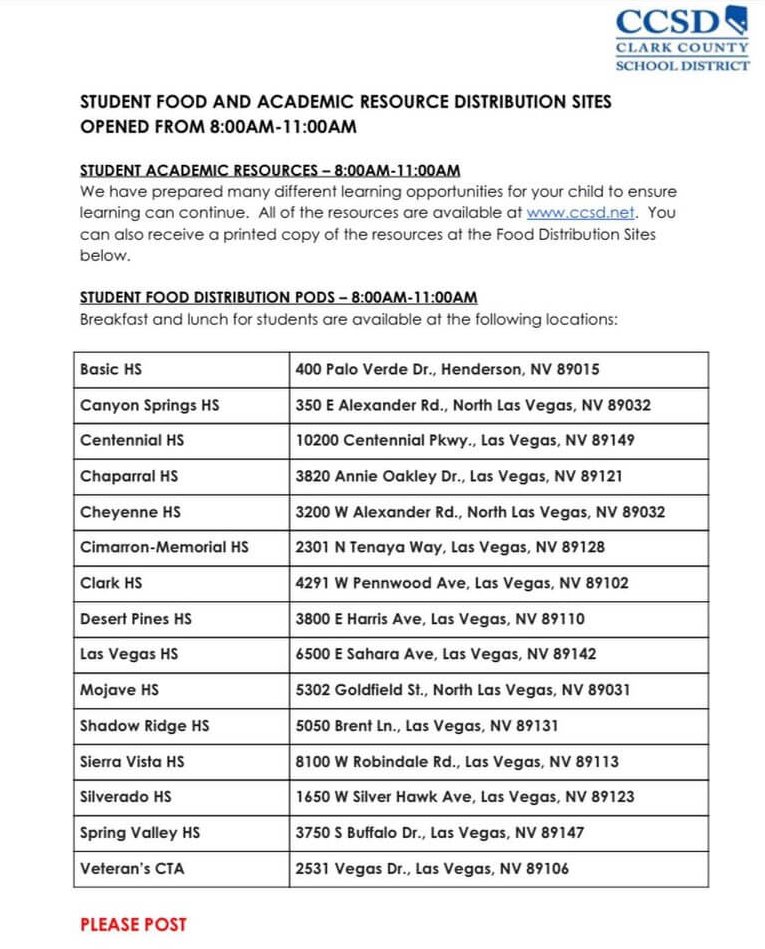 The governor said the state superintendent would be working with individual districts to help provide community resources for families.

More than 60% of CCSD students qualify for free or reduced breakfast and lunch, meaning they come from families making 180% or less of the federal poverty guidelines.

Sisolak urged employers to be flexible with scheduling given the childcare burden that will now fall on parents of school-age children.

Sisolak and CCSD Superintendent Jesus Jara, who joined him at the press conference Sunday afternoon, had no additional details on what the closure means for the school year as a whole.

Jara said the district would follow the collective bargaining agreements and that employees — licensed educators, police, administrators and support — would be getting paid during the shutdown.

“This is unprecedented waters,” he added.

Schools are required by the state to provide students with 184 days of instruction. When schools cancel an instruction day (for bad weather, for example) they are required to make it up at a later date. However, the length and circumstances of this closure make the situation unique.

The state superintendent of education could waive the 184-day requirement.

While most of the state’s public colleges and universities have closed their physical campuses and are transitioning to online learning, CCSD officials have said remote learning is not feasible for their district. Shortly after the press conference Sunday, CCSD employees received an email saying only employees deemed “essential” will be required to work during the closure.

Clark County Education Association Executive Director John Vellardita told the Current Sunday the school district will run into contract issues if the school closure extends past the district’s spring break. According to the collective bargaining agreement between CCSD and CCEA, the work year for licensed educators is supposed to end no later than the second week of June.

He echoed earlier comments from district officials saying remote learning would not be possible during the closure. That said, Vellardita emphasized his support for the closure, saying it was a statewide public health issue.

(Note: This story was updated with additional information, including the release of food distribution locations.)

Trump to stay ‘the next few days’ at military hospital for...