A woman in her 60s is the second reported person to die in Nevada of the coronavirus, Southern Nevada Health District officials announced Friday.  The woman had underlying health conditions, according to SNHD.

Meanwhile, as the number of known cases in the state increased to 109 Friday, with 74 in Clark County, the testing outlook remains bleak.

“We were expecting a large batch of tests but we did not receive that,” Dr. Fermin Leguen, Clark County’s acting chief health officer said at a press conference streamed on social media.

A solicitation from the Federal Emergency Management Agency (FEMA) for Southern Nevada to request drive-thru testing conducted and supplied by the feds has been “placed on indefinite hold” according to Dr. Mike Johnson, who called the development “very disappointing news for us as we continue to work with our federal partners to obtain these resources that are greatly needed for not only Southern Nevadans but all Nevadans.”

“That’s a question for FEMA,” Leguen said when asked why Nevada’s request is on hold.  “Unfortunately, we don’t know. We just received notification last night.”

The health district says it’s launching an epidemiological profile of cases on its website, including information on age and gender distribution, which will be posted daily after 3 p.m.

Officials said they “continue to receive a limited supply of testing resources” which are used to test contacts of those confirmed positive.

Health care providers are encouraged to send specimens to private labs such as Quest and Lab Corp.

“We are urging health care providers to work with patients to review symptoms so those at highest risk are able to be tested,” Johnson said.

Leguen said health care providers “should take advantage of commercial labs when they have patients they suspect who have coronavirus with symptoms that don’t require an emergency room.”

“Not everyone who feels sick has coronavirus,” Leguen said, imploring Southern Nevadans not to show up at emergency rooms.

“With most patients, the presentation is typically a mild presentation that can be treated ambulatory and basically is asymptomatic,” he said.  “Most of our patients (in hospital) have been patients that could be characterized as severe or close to severe.”

At a news conference Friday, Gov. Steve Sisolak said only 20 percent of the state’s hospital beds and ventilators are currently available. 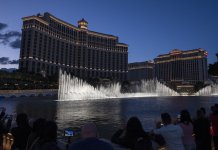