Gov. Steve Sisolak on Tuesday signed a directive prohibiting public gatherings of ten or more people in Nevada. It is the latest in a series of orders forcing “aggressive social distancing” to combat the spread of the novel coronavirus.

The order bans the general public from gathering in groups of ten or more in any indoor or outdoor space, the governor said in a press conference streamed on social media. It applies to parks, parking lots and sports fields, among other places.

Sisolak said the order was needed because “there are some who still don’t understand the severity of the issue we are facing.” As of Tuesday afternoon, the state was reporting 278 confirmed cases of COVID-19 statewide, including six deaths.

Sisolak said the directive would be backed by consequences for anyone who fails to comply, but he emphasized that law enforcement must give warnings first. The specifics on what the civil or criminal penalties for individuals might be isn’t clear yet.

“While I don’t believe they intend to harm their neighbors, the reality is we need the tools to address those circumstances where people are engaged in reckless action that endangers the public health of our state.”

The order also directs local governments to limit the public’s use of recreational equipment where more than ten people may gather and be closer than six feet apart. This includes playgrounds, basketball courts and baseball fields.

The public gathering ban does not apply to people who live in the same household. “If you live inside together, you can be outside together,” he added.

“Additionally, this measure does not apply to our state’s homeless population,” he said.

Taking questions emailed from the press and read by his staff, Sisolak also said that he is working with the state attorney general’s office “who is researching the options available to us” to provide relief to renters, who account for roughly half the households in Southern Nevada.

“We’ll come back with an answer to that when we have enough information” to provide one, the governor said.

There order in its entirety is available here: Declaration of Emergency Directive 007.3-24-20 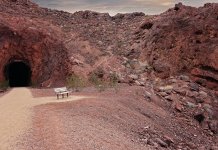