A group of volunteers in Northern Nevada are taking refuge amidst the coronavirus pandemic in the great outdoors while providing a much needed service.

What are they doing? Darting wild horses with birth control.

With a team of two dozen volunteers and a budget of $182,000, the American Wild Horse Campaign (AWHC) last year vaccinated more wild mares with fertility control than the Bureau of Land Management, with its $81 million-a-year budget, according to the campaign.

And even in the midst of a global pandemic wild horses are doing what they always do at this time of year — birthing and breeding — elevating the need for humane population control.

Three weeks ago at the start of the statewide shutdown, Deb Walker, the Nevada field representative for the AWHC, delivered supplies to volunteers wearing masks, eyewear and gloves.

“We’re not really in areas where anyone would be in a situation where they would be at risk of contracting the virus,” Walker said, but the rise of COVID-19 has led to precautions. Volunteers now drive out in separate cars and practice social distancing while on the range.

In a coordinated drop off, Walker placed bags on the ground about 10 feet away for volunteers to pick up and go.

The bags contained darts and PZP fertility control, a treatment that can keep a mare from becoming pregnant for a year, slowing herd growth, and reducing the need for BLM to perform wild horse roundups that lead to the animals sitting in holding pens or getting injured.

The vaccine requires a primer dose then a booster shot a few weeks later, with annual boosters thereafter.

“It’s time sensitive work,” Walker said. “We don’t want any of the mares to lapse.”

This month marks the first anniversary of cooperative agreement between the campaign and the Nevada Department of Agriculture (NDA) to implement a fertility control program for the Nevada Virginia Range horses.

Virginia Range horses are property of the state of Nevada but the NDA does not receive any specific funding to control the Virginia Range wild horses population.

Last spring, the AWHC approached the department with a proposal for darting mares and so far their staff and volunteers have been effective in meeting the expectations and requirements of the cooperative agreement with the state, according to NDA Director Jennifer Ott.

“We value public-private partnerships and were glad to make this agreement work,” Ott said in a statement.

A team of 12 darters, 11 of whom are volunteers, and 10 additional volunteers who photograph and identify horses in a tracking database, have worked on the program for the last year.

With a wild horse population in the Virgina Range estimated at 3,000, the AWHC team has treated 980 mares with PZP fertility control with a total treatment count of 1,783, hitting about 80 percent of the estimated breeding age mare population, the benchmark for effective population control.

“We have darters out in the fields every single day,” Walker said. “It’s important to get it started and let it continue.”

Growing herds of wild horses have become the biggest public lands management crisis facing BLM today, some experts say. Overgrazing has led to a grassland full of invasive “cheatgrass” — grasses that are a major cause of wildfire and harm perennial grassland that provides diverse habitat for wildlife.

Walker said the PZP treatment is effective but can take three to five years to show significant results.

For fertility control to be effective on herds, it requires a lot of work, detailed documentation, dedicated volunteers, and a local government willing to embrace those volunteers.

Republican Nevada assemblyman Jim Wheeler helped launch the program along with the company Blockchains LLC and its CEO Jeff Berns, and with support from Democratic Gov. Steve Sisolak.

“This was 100 percent non-partisan,” said Wheeler said. “There was no politics involved whatsoever.”

Wheeler represents Douglas and Storey county in Northern Nevada as well as parts of Lyon county. The Virginia Range — which falls into his district — can only support about 700 horses, far below the estimated population of 3,000 there is now, according to the NDA.

“Horses are very overpopulated in this area,” said Wheeler, who bred horses until he retired in 2008. “But by that same token people don’t want to get rid of the horses – the vast majority of my constituents. The best thing we could do was a fertility control program that will reduce the population of horses over a number of years.”

Part of the range also crosses through the Tahoe Reno Industrial Center, home to Tesla, Google, Switch, Blockchains and dozens of other businesses.

Growing herds are a safety issue for Northern Nevada as those businesses expand and encroach on the once empty range where wild horses graze, boosting the importance of population control, said Walker.

“When you’ve got more streets, more highways going into what used to be the migratory pattern of several horse bands you’re going to get horses on the highway so this is going to help mitigate that.” 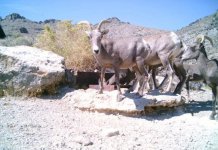 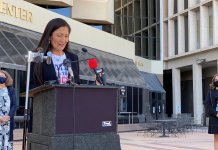 Electric bus plan is now a law, but is there money...