When it comes to complaints from tenants about landlords or property managers , the Legal Aid Center of Southern Nevada usually gets, on average, 225 calls per month. Maybe 250.

Since March 19, the organization has received 2,482 calls.

And the number of complaints is “probably larger than that,” said Christopher Storke, an attorney with the consumer rights project at the Legal Aid Center of Southern Nevada. “That doesn’t include people seeking help at the Civil Law Self Help Center.”

Rent was due April 1.

Even though Gov. Steve Sisolak placed a statewide moratorium on evictions and lockouts, urging landlords and property managers to work with tenants about repayment plans, legal groups are still getting unprecedented calls from people in crisis.

“This directive applies to those residing in extended stay motels and weekly rentals,” the governor’s office said in a guidance document accompanying the eviction moratorium.

Storke said weekly motels across the valley have still locked out tenants or even forced them from their homes despite the directive.

The Nevada Attorney General’s office has received 156 eviction and mortgage complaints as of Thursday, and has “brought 78 of these complaints to resolution.”

Last week, the city of North Las Vegas voted to fine landlords and property managers up to $1,000 for attempting to remove tenants.

Despite some state and local response, people are still facing threats.

Joseph Gilsoul was one of the many tenants who reached out to legal aid this month.

Gilsoul, a union electrician who has struggled with employment since November, was expecting to pick up contracts in March and start working again, but then COVID-19 hit, bringing everything to a halt.

He, his girlfriend and his two children, 4 and 5 years old, have lived at Sportsman’s Royal Manor for close to a month. But when his girlfriend, who is still employed, knew her paycheck wouldn’t arrive in time to pay $265 April 1 for their weekly room, they contacted a manager and even made a partial payment.

“He said there wouldn’t be a problem as long as it was paid,” Gilsoul said.

The morning rent was supposed to be due, Gilsoul said armed security guards showed up at the front door. They pushed their way in, and forced Gilsoul, along with his two kids who were with him at the time, out of the apartment, taking his keys.

“I had to fight with the guy to get my car key off the ring,” he said.

Gilsoul asked if he could collect medication for his son’s seizures, as well as their belongings, but was forced to wait hours before he could re-enter.

Erin Ben-Samochan with the Sportsman Royal Manor said they couldn’t find a record of Gilsoul as a resident.

“Since the governor made his order, we have not had any type of lockout or evictions,” she said. “We are working with our tenants, taking partial payments and doing everything we can.”

Some motels are saying because tenants haven’t lived in units more than 30 days they are periodic tenants and the typical landlord-tenant agreements don’t apply.

Storke noted that many have contracts that only run 28 days. Afterward, a tenant is asked to move to a different unit or another property operated by the same company. Owners are telling tenants they have to wait 24 hours before they check into a new unit, which shows a person checked out.

“Weekly motels have been trying to be sneaky,” he said.

Some weekly motels have been offering tenants repayment plans, but Storke has seen some contracts come with fees as high as an extra $80 per day.

One Siegel Suites tenant, who didn’t want her name published out of fear of retaliation, said she felt like she had no other choice but to sign her repayment agreement. She didn’t want to get thrown out.

Unable to pay the $270 a week, she accumulated $1,100 in unpaid rent. Under the agreement, which starts next week, she will be repaying an additional $100 each week on top of her rent through the end of June.

The Current reached out to Siegel Suites but hadn’t heard back at the time of publication.

Even with all the complaints legal aid has received, Storke says there are probably more. People don’t want to deal with the hassle of seeking legal recourse and would rather move on.

Gilsoul is now living at another weekly, constantly on hold with the unemployment office. He has had to explain to his children more than once why security forced them to leave their last home.

In the end, he decided not to pursue legal actions. “I don’t want to sit in court fighting for 200 bucks,” he said. “One man can’t change the world. It’s sad but true.” 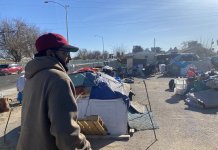 Social distancing not an option for those experiencing homelessness